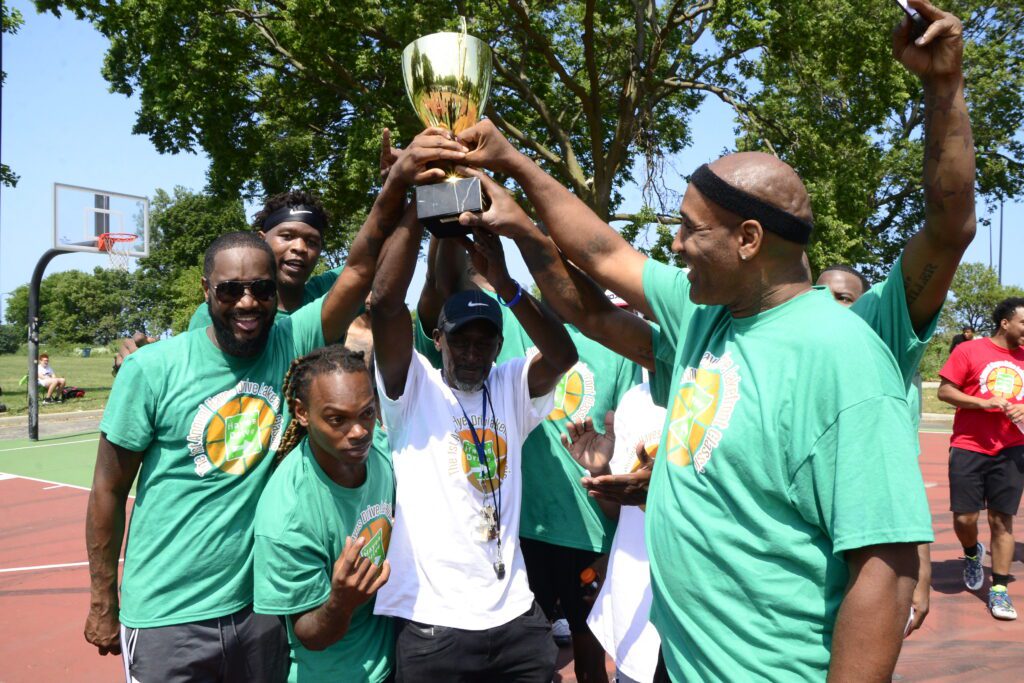 The event was hosted by Tournament Director Joseph Phillips, a former high school and college basketball player from the area.

Phillips said that both the tournament and the trophy were dedicated to his father, John “Speedy” Phillips, and several other basketball legends who helped contribute to the growth of the basketball court near the popular 63rd Steet Beach.

Phillips said in spite of the court’s legendary status and the renowned players the park may have hosted, he was pleased, impressed and honored to work with several unsung volunteers who donned a colorful array of street names for the tournament and donated money, goods and services.

Calvin, aka “Penny,” donated chairs and tables to the event; Mr. Melvin, aka “the Mayor of Hayes Drive” and Commissioner of the tourney, supported the financing of the statistics team; Mr. Jarvis Holmes aka “Coach,” who assisted Coach Joe and the Hayes Drive staff with everything they needed. “KG,” aka the Head of Concessions, collected donations around the park and helped organize and distribute food and water.

Throughout the tournament professional photography services and drone work were contributed by “Chilly,” and “Big Chris” volunteered his services upon arrival as the adjunct colorful PA announcer who kept the crowd hyped throughout the game.

“DJ Polo” contributed music services and wowed fans with an NBA arena experience, presenting an action-packed music theme from the early 90s; and “Space,” a gentleman who projects an intimidating presence on the court, volunteered his services, helping to oversee the Hayes Drive/Lakefront security team.

“On this beautiful bright and sunny day, God has helped us bring this vision into fruition,” Phillips said. He said God gave him a vision and a dream to help organize and finance the basketball tournament. In the dream he said he saw several athletes playing together representing all generations. The dream depicted Generation X, Y, Z and the Baby Boomers in a “winner-take-all” championship game for the prize, the Gold Cup Trophy

Following the dream, Phillips said he expanded the dream and came up with the idea to sign up 30 of the top players at Hayes Drive, select two captains for each team, put all 30 players through a draft process, split them up and create two 15-player rosters and donate 30 team uniforms.

King was King High School’s first ever basketball star. With his amazing basketball skills, he helped put the school on the map prior to its multiple championship runs in the 90s. “It was great seeing those guys together,” said Chicago legend Sonny Parker about the 1st Annual Hayes Drive Lakefront Classic. “The event helped build great camarderie amongst the guys. It also built a great brotherhood. It was good to see each guy coming together in brotherhood for a great cause. We also used to play together growing up and it was great to see the guys working together today doing the same. Joe (Phillips) did a great job putting it together.”

The game featured four, 12-minute quarters (NBA style), one professional official/referee named Mr. Jerry, and a 20-minute halftime show featuring a 3-on-3 basketball contest. The contest was promoted by Chicago basketball legend Charlie Brown and businessman Tony Brooks of the Windy City Senior Basketball League. The senior hoopers, ranging in age 50 and up, displayed an array of skills during an intense 8-minute game.

“It was a great pleasure of mine to have Mr. Charlie Brown and Mr. Tony Brooks lend us several of their great players from the Windy City Senior Basketball League roster for the championship game’s halftime show,” said Phillips. “It really puts a cap on the whole day. It was also good to see all generations represented on the basketball court as well.”

“The Windy City Senior Basketball League founded by DuSable’s ‘Sweet’ Charlie Brown would like to thank Joseph Phillips and the Hayes Drive Lakefront committee for showcasing seniors and our league via the 3 on 3 exhibition game on Saturday, July 31, 2021, as part of your halftime festivities,” said Eugene S. Henry Jr., Central City Senior League Captain. “Although not able to be there, the participants related that everything was great, and they thoroughly enjoyed themselves.

My sincere appreciation and thanks to you and especially to Tony Brooks, Walter Gibson, Keney Johnson, James Lewis, Ian Mahoney, and Wiley Moore for representing seniors and the Windy City Senior Basketball League in this First Annual Lakefront Basketball Classic.”

Though the seniors’ game was intense to watch, the championship game was awesome to watch as well. Awesome with a “capital A.” The two teams battled it out for bragging rights in a “Green” versus “Red” championship showdown (in honor of the Green and Red colors that don the floor of the Hayes Drive clay basketball court). The court featured a battle that would determine the recipient of “The John ‘Speedy’ Anderson Phillips Gold Championship Cup”… the first awarded in Lakefront history.

“For over 30 plus years, my dad played at the Cage basketball court on Stony Island, the Lakefront basketball courts on both the South and North sides and the Old Navy Pier during his basketball hey-days in the 60s, 70s and early 80s,” said Phillips, John Phillips’ youngest son.

“When we were little boys, he took me and my big brother John Jr. to play basketball up and down the Chicago Lakefront. And after his retirement from the game, it became a tradition for our family during the late 80s, early 90s and the 2000s.”

With the inception of the Hayes Drive tournament, for the first time in Lakefront history, the players would compete for a cup of their own.

The showdown brought out legends such as Joe “Fadeaway,” responsible for the petition that helped build the new basketball court that players embrace today; and “Storefront,” a Hayes Drive legend who aided in starting a petition to keep the court.

“Mr. Trash” was present, a Chicago basketball legend responsible for donating the 10-foot regulation basketball rims and bringing one of the world’s largest basketball tournaments and domes to the shores of 63rd Street Beach, courtesy of NIKE.

Prior to the game, the group along with Commissioner Melvin (aka the Mayor) honored a young man, Jerron A. Garner, who lost his life after suffering an asthma attack on the court earlier in the summer.

“Today, we at Hayes Drive honor the young man who lost his life on the basketball court to an asthma attack weeks ago,” said Commissioner Melvin. “We dedicated a skateboard (which he loved to ride) with his name carved on it, along with several other names of those who have passed away, who were special to us and the park.”

Following the pregame ceremony and memorial honoring Garner and others, the first quarter saw the Red Team jump out to an early 14-10 lead.

The group’s hot shooting and tough defense kept the fans engaged and asking for more. The Red Team was under the veteran leadership of former NBA legend, University of Illinois stand out, and Indian Hills Community College Hall of Famer Shelly Clark. Clark was inducted into the school’s Hall of Fame back in 2019. Clark was the school’s all-time rebound leader.

In the second quarter, the Green Team would make a run of its own, thanks to great scoring and several defensive stops courtesy of their pressure defense. The defense, along with a balanced offensive scoring attack by forward Terry Miller, guard Phil Berryhill, Sr., and forward Avery Busch, helped the Green Team trim a four-point lead to one point, 27-26 at halftime.

Over three quarters of play, the Red Team outscored the Green Team 45-42 heading into the fourth quarter. A bulk of the Red Team’s scoring was attributed to the amazing play of Mr. Dero “the Baller.”

Dero, a skilled ball handler and one of the three-level scorers at the park, is dubbed by many as one of the top three players at Hayes Drive. He finished with a team-high 20 points in his Hayes Drive Lakefront Classic Championship game debut and was runner-up to the Green Team’s Terry Miller for the championship game MVP.

Miller, another of the top three players at the park and a three-level scorer, exploded for a team-high 20 points and eight rebounds in his debut. Enroute to the game’s MVP trophy, Miller scored on a combination of “And 1’s,” jump shots, lay-ups and putbacks. Miller’s most memorable highlight came on an “And 1” putback as he yelled to the crowd and flexed his muscles. Miller’s memorable performance helped lead his team to the first championship title on Saturday afternoon. He was named the game’s MVP.

The most clutch play of the game came on back-to-back baskets by Phil Berryhill, Jr. He made several key plays down the stretch, including a huge steal that led to an easy breakaway dunk that helped put the game away for good.

The Green Team was crowned 2021 Lakefront City Champions in the inaugural tournament, making Lakefront tournament history. The group hoisted “The John ‘Speedy’ Anderson Championship Gold Cup” in the air and celebrated with fans on their home court as they were awarded gold medals and bragging rights throughout the year. As a tradition, Phillips said the championship game will be played every summer annually, the final week of July.

Recognizing good sportsmanship from both teams, the Red Team was awarded gold medals for its competitive spirit during the contest. Both teams celebrated together during the trophy ceremony after Commissioner Melvin awarded the Green Team the trophy.

“God blessed, and the event was very peaceful,” Phillips said. “God willing, we can run it back again.”

4) Phil Berryhill, Jr., Green Team, 12 points, plus a huge steal and a dunk to close out the championship game.

“I’m honored to be a part of this,” said King. “[Congrats to everyone who participated].”

A Message From Director Joseph Phillips: “A special shout out to all the sponsors, players, coaches, honorees, fans, and media outlets who graced us with their love and care on Saturday, July 31.

Also, a special shout out to my mother Ava Phillips; my sisters Donna Hall of Hall Issachar Ministries and Charmayne Biddings; my big brother John Phillips; my baby sister Lana Bolden; all of my family; my beautiful wife Cassidy Phillips and my two handsome sons Zion and Theo John Phillips. This tournament was in loving memory of my Pops, John “Speedy” Anderson Phillips.

God Bless everyone and to God be all the Glory.”