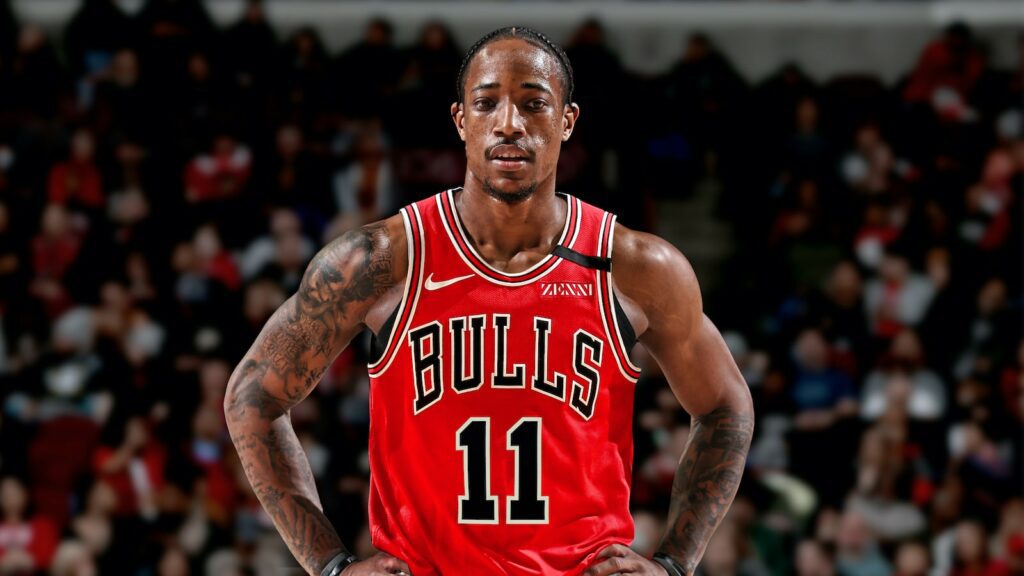 After adding Lonzo Ball to the roster last week, the Bulls were not yet finished and added four-time All-Star DeMar DeRozan via sign and trade from the San Antonio Spurs.

According to NBC Sports Chicago, DeRozan will be the 20th player in Bulls history to wear the Number 11, with Javonte Green (2021), David Nwaba (2018) and Doug McDermott (2017) the three most recent. DeRozan has worn Number 10 his entire NBA career — with the Raptors and Spurs — but that number is retired by the Bulls in honor of Bob Love.

DeRozan’s bio shows he played his college career for the USC Trojans and was selected ninth overall by the Toronto Raptors in the 2009 NBA draft.

DeRozan is a four-time NBA All-Star and a two-time All-NBA team member. He spent nine seasons with the Raptors, including five playoff runs, before being traded to the Spurs the summer of 2018. DeRozan has played for the United States national team in the 2014 World Cup and the 2016 Summer Olympics.

In November 2007, DeRozan signed a letter of intent to play basketball at USC. He chose USC over Arizona State and North Carolina.

In his first game for the Trojans, DeRozan scored a team-high 21 points with seven rebounds in an exhibition game against Azusa Pacific, an 85–64 victory at the Galen Center.

DeRozan had 14 points in his first career regular-season game in a win over UC Irvine.

His efforts in the tournament saw him earn First Team Pac-10 All-Freshman honors in addition to being named Pac-10 Tournament MVP. The Trojans went to the 2009 NCAA Men’s Division I Basketball Tournament as a 10th seed, where they lost in the 2nd round to Michigan State.

DeRozan started all 35 season games for the Trojans, scoring in double figures 28 times and posting four double-doubles. He ranked third on team in points (13.9 ppg), second in rebounds (5.7 rpg), third in assists (1.5 apg), and second in field-goal percentage (.523, eighth-best in conference).

He followed his regular-season efforts by averaging 19.8 points in USC’s five postseason games. His 485 points rank third all-time, and his 201 rebounds are fourth all-time for a USC freshman.

DeRozan became the first San Antonio player with a triple-double at home since Tim Duncan in 2003, and the first Spurs player to have at least 15 points, 10 rebounds and five assists in a half since Duncan in 2007.

DeRozan also recorded his first double-double in a half. On February 7, he scored 35 points in a 127–118 loss to the Trail Blazers. On February 22, he played his first game in Toronto in a Spurs uniform. He finished the game with 23 points, 4 rebounds and 8 assists.

On August 11, 2021, DeRozan was traded to the Chicago Bulls in a sign-and-trade deal, signing a 3-year, 85-million-dollar deal.