Darius Sanders on the rise as nation’s top Roller Skater 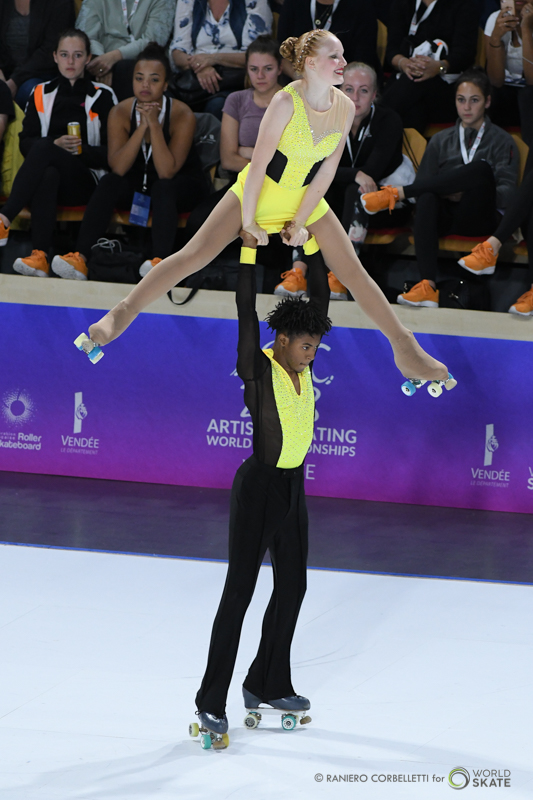 With more than 121 medals under his belt, 17-year-old Darius Sanders is currently ranked as one of the top African-American roller skaters in the world.

Now a senior at Butler College Prep High School on Chicago’s South Side, Sanders hopes to take the sport of roller skating to another level.

The Crusader sat down with Sanders on Saturday, December 14, at the United Center, to talk family, his love for the sport, his most recent performance with his skating partner during a Chicago Bulls halftime show, and his current plans to compete in roller skating competitions across the world.

“My mom used to compete when I was young,” said Sanders, about his family and how they introduced him to the sport of roller skating when he was young. “I used to go to practice(s) with her and there would be other kids there. I watched them and told my moms, ‘I would like to skate like them one day.’”

Sanders, who started roller skating at the age of five, credits his mother Cassandra, a competitive roller skater and father Phillip, who skated for fun, with helping him develop his skating skills throughout the years.

Thanks to his skating ability, Sanders said his son has already traveled to places such as Barcelona, Spain, and Paris, France. Sanders also said his son likes to skate to JBs as well.

“At the age of 7, I noticed the talent my son had. I knew he was special,” said Sanders, about the skills and ability of Darius. “I just didn’t know how special he was. But as time went on, he started believing in himself as a skater and that he could be a role model as well.”

In addition to inheriting superb skating skills from his parents and a genuine love for the sport, Sanders also met a superb skating partner named Samantha Krusza in his youth as well.

According to Sanders’ coaches, the two have been skating partners for six years now and have established quite a resume, including finishing first in the 2015 Figure Roller Skating National Championships.

In a past interview on the two dynamic skaters, Sanders mentioned that trust was the key for the duo’s most recent success. And as the two performed several aerial acrobatic moves during Saturday’s Bulls halftime show, trust was evident in their performance.

Sanders and Krusza strongly believe they have each other’s backs.

“We have a lot of trust in one another,” said Sanders in a past interview with CPS. “Other partners have trust, but not as much as we do. When I throw Sam into the air, she knows I’ll be there and catch her.”

Sanders also said in a past interview that routines typically last from three to four minutes. And as far as choreography for the routines, he usually writes down ideas, practices the moves and sees where the routine goes from there.

“Darius is amazing,” said Krusza in a past interview. “He never lets me fall, and he does everything he can to make sure we perform amazingly.”

And according to a U.S. National Figure Roller Skating Committee, the two are currently ranked first in the nation as No. 1 couples skaters.