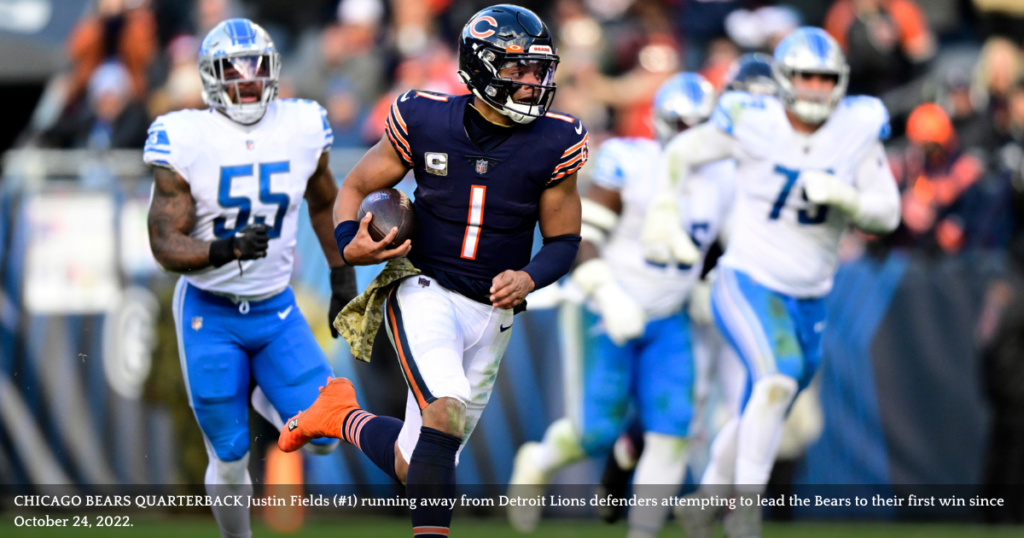 In spite of the loss by the Bears, quarterback Justin Fields became the first quarterback in Bears franchise history to post back-to-back 100 plus rushing yards games. Fields finished Sunday’s game with 147 yards on 13 rushes and two touchdowns while also completing 12-of-20 passes for 167 yards and 2 TDs.

His last two games have yielded a combined 325 rushing yards, the most total rushing yards in a two-game span by a quarterback in NFL history, surpassing Lamar Jackson’s 268 combined yards, which he recorded October 13, 2019, through October 20, 2019.

Fields also has the highest rushing yardage total by a quarterback against the Lions in NFL history, surpassing Randall Cunningham, who recorded 110 rushing yards against Detroit in November of 1986.

In the first quarter, Fields broke free for a 28-yard rush on Chicago’s opening drive. It was his fifth rush of 20 plus yards on the season and his 23rd rush of 10 plus yards. Fields entered the game ranked first in the NFC and fifth in the NFL in rushes of 10 plus yards by an offensive player.

Fields scored the Bears’ first touchdown of the day with the first half winding down, going 15 plays and 85 yards down the field to cap off the drive with a one-yard touchdown run with :21 remaining. It was the fifth rushing touchdown of the season for Fields, and his fourth in as many games.

Per STATS Research, Fields is the first quarterback in NFL history with 60 plus yard rushing touchdowns in consecutive games.

To close out the game, the Bears gave up 21 points in the fourth quarter after establishing a 14-point lead in the second half. Their loss to the Lions dropped their record to 3-7 on the season.

Chicago Crusader Player of the Game: