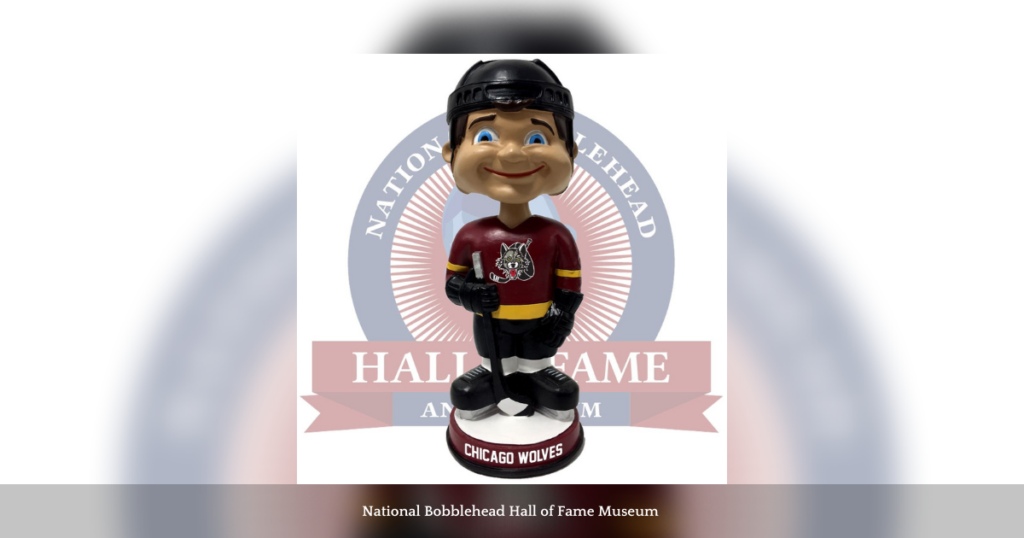 “We’re excited to be working with the AHL to release the first collection of vintage bobbleheads featuring every American Hockey League team, as well as a bobblehead commemorating the Wolves’ 2022 AHL title,” said Phil Sklar, National Bobblehead Hall of Fame and Museum co-founder and CEO.

“After winning the Calder Cup championship in the 2021-22 season, the Wolves are sure to generate plenty of excitement as they try to defend their title in 2023!”

According to the National Bobblehead Museum, the special edition champion bobblehead commemorates the Wolves’ 2021-22 AHL championship.

The vintage bobblehead is part of the American Hockey League Vintage Bobblehead collection that the National Bobblehead Hall of Fame and Museum is releasing in conjunction with the 2022-23 AHL season.

Wearing his Number 94 jersey with his name on the back, the Wolves’ mascot ‘Skates’ bobblehead holds the Calder Cup while standing on a base that reads “2022 CALDER CUP CHAMPIONS.” The base also features the Wolves’ logo and mascot’s name.

Gray, maroon and white uniform options are available. Each bobblehead is individually numbered to 2,022 and are only available through the National Bobblehead Hall of Fame and Museum’s Online Store.

The bobbleheads, expected to ship in November, are $35 each plus a flat-rate shipping charge of $8 per order. A set of all three can be purchased for $100.

One of the most successful franchises in the history of the American Hockey League, the Chicago Wolves won their third championship in 2022 after defeating the Springfield Thunderbirds in five games in the Calder Cup Finals.

The team’s previous titles were in 2002 and 2008. The Wolves won the Central Division with a league-high 110 points in the regular season.

The team is currently an affiliate of the NHL’s Carolina Hurricanes.

The Wolves joined the AHL for the 2000-01 season and have qualified for all but five postseasons, while appearing in eight league championship finals. They are the only AHL team with a full television package, as all 76 regular-season games and the playoffs are televised.