WHERE THE BLACK PEOPLE AT? 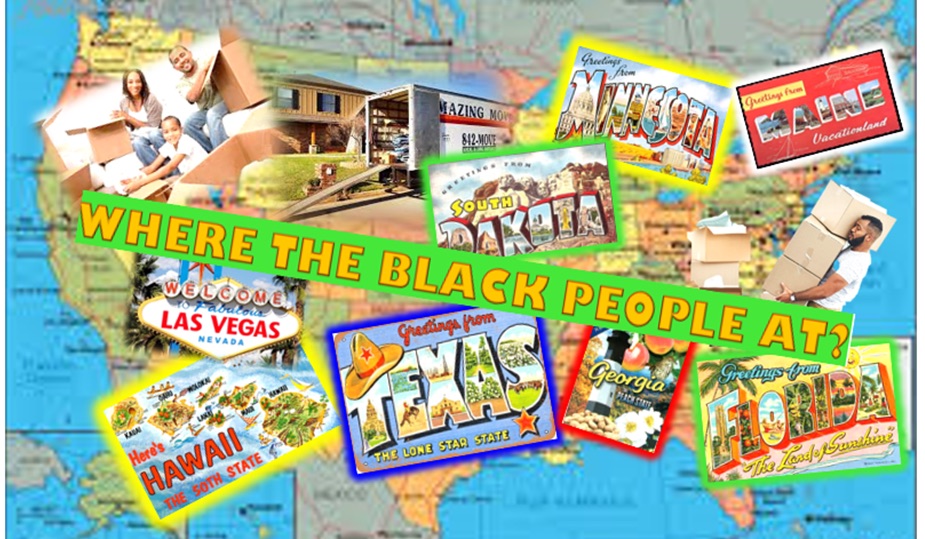 The moving vans are busy as Black folks across the country are packing up and jumping on the midnight train to Georgia. They’re galloping to Texas, exploring North Dakota and celebrating with luaus in Hawaii.

Meanwhile, Blacks are leaving the Prairie State in massive numbers. Ac- cording to the 2020 Census data, Illinois lost a total of 165,842 Black residents in the last decade in a Midwest region where seven additional states saw Black population declines totaling 365,871.

But four Midwest states have surprisingly emerged as the home of a record number of Blacks who have bucked the trend of a reverse migration back to the South and settled in the most unlikely places where few Blacks have historically dared to go. They are North Dakota, South Dakota, Minnesota and Iowa.

In the Northeast, hundreds of thousands of Blacks have left New York, but many are heading to, get this: Maine. It’s the only state in the Northeast region that gained new Black residents in the last decade.

For Blacks, the West is dead, but the South is on fire, with hundreds of thousands moving to Texas and Georgia while Florida continues to bloom with new Black residents.

Those are some details in an extensive Crusader analysis of the latest 2020 data on America’s 42 million Blacks inhabiting the nation’s 50 states along with Washington D.C. and Puerto Rico. Blacks everywhere are moving back to the South decades after living in the North and Midwest.

Historically, the South has had the highest Black population among the four regions, but its lead is larger than ever with the ongoing Reverse Migration.

Of the four U.S. Census regions, the South was the only one overall that gained new Black residents. The gains in some states in the Northeast, Midwest and West were not enough to offset the Black population losses that have occurred in 26 states.

The South did have nine states that lost Black residents in the last decades. They include Arkansas, Kentucky, Louisiana, Mississippi North Carolina, South Carolina, Tennessee, Virgina, and West Virgina. Those states lost a total of 245,687 Black residents.

But losses were offset by huge gains that Texas and Georgia and five other Southern states made in attracting new Black residents. Census data show Texas drew 384,528 Blacks since 2010, the highest number of new Black residents than any state in the country.

Some data analysts believe those population gains are driven by Houston, where Blacks have moved to in the last decade because of its weather and low cost of living.

Georgia had the second-highest Black population growth in the country with 266,415 new Black residents. Florida, which in 2014 overtook New York as the nation’s third-largest state, gained 45,718 in Black residents alone in the last decade.

The region’s 23,582,989 Blacks include Washington, D.C., known historically as “Chocolate City.” Despite gains of young white, affluent residents, Blacks remain a majority with 41 percent of its population in the district.

Despite its decline, the Midwest has the second-highest Black population with 7,228,615 residents, a loss of 365,871 Blacks who left the region in the last decade. Eight Midwest states lost thousands of Blacks in the last decade. While Illinois’ 165,842 Black population decline is the third highest in the country, Michigan is fourth with 28,935. Indiana lost just 5,902 Black residents since 2010.

About 6,628,896 Blacks still live in the Northeast region, which includes heavily populated Black states New York, New Jersey and Pennsylvania. The region’s Black population is the third-highest among the four regions. But 558,592 Blacks have left since 2010.

The Black population decline was also devastating in the West region, where a total of 3,679,103 Blacks now live in 13 states.

California registered the highest Black population loss in the continental U.S. in the last decade. Between 2010 and 2020, about 446,870 Blacks left the Golden State where the cost of living is notoriously high. Ten states suffered Black population losses during that period. They include Washington, where 17,439 Blacks said goodbye in the last decade.

Another massive Black population loss occurred in Puerto Rico, which is seeking to become the nation’s 51st state. Between 2010 and 2020, about 321,548 Blacks have left the U.S. Territory.

In the past four years, Hurricane Maria devastated Puerto Rico, send- ing thousands of residents to seek a new life in Florida, particularly Miami and Orlando. Many Puerto Ricans are descendants of Africans and identify themselves as Black in race and culture. According to the U.S. Census, in 2010, there were 550,259 Blacks in Puerto Rico. Today, there are 228,711 Blacks in the U.S. Territory.

In the Northeast region, Maine was the only state that gained new Black residents. Census data show that 3,988 people were added to the state’s 21,764 Black population for an 18.3 percent increase.

In the West, Hawaii, which is notoriously known for its very high cost of living, saw its Black population soar by more than 65 percent in the last 10 years. Census data show that Hawaii is the most diverse U.S. state. Some 15,403 Blacks have moved there in the last decade.