Wells Fargo rejected over half of Black applicants for refinance mortgages 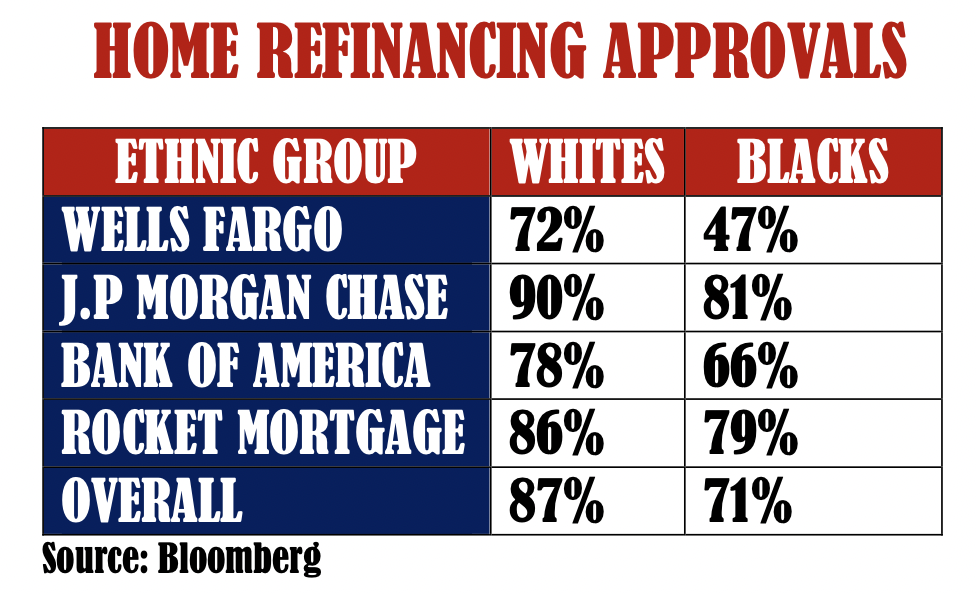 At a time when low interest rates and housing demands fueled a housing industry boom during the pandemic, Wells Fargo rejected more than half of Black applicants seeking to refinance their mortgages, according to a report in Bloomberg News.

The report also said Wells Fargo Mortgage had nearly 30 percent of Black applicants who did not complete the application process, fueling concerns that they experienced soft denials that steered them through options other than the home refinance process.

Through the Home Mortgage Disclosure Act, the report examined 8 million completed applications to refinance conventional loans in 2020. The report also raised questions about the recent lending practices of Wells Fargo, which is based in San Francisco.

The report details the struggles of Black applicants, including one man who grew up in Chicago. He was denied a home refinancing loan with Wells Fargo, despite having a near perfect FICO credit score of 800.

According to the report, Wells Fargo, the nation’s third largest bank in 2020 had refinancing approval rates among Blacks that were far lower than white applicants and other major banks.

Overall, Black applicants had the lowest approval rates among banks than whites, Hispanics and Asians.

The Bloomberg report also said that Wells Fargo’s approval rates for the lowest income white families were nearly the same as their rates of approval for high-income Black families that earn at least $168,000 a year.

However, when comparing lower-income Black and white applicants, who both earn $63,000 a year, the approval rates were nearly double for whites.

Bloomberg reported that Wells Fargo declined to comment on its findings, but said it says it treats all potential borrowers the same and is more selective than other lenders. Wells Fargo told Bloomberg that its internal review of the bank’s 2020 refinancing decisions confirmed that “additional, legitimate, credit-related factors” were responsible for the differences.

In 2021, as part of its effort to boost Black homeownership, Wells Fargo invested $50 million in 13 Black-owned community banks (none are in Chicago).

Some analysts argue that the approval rate among Black and minority applicants at Wells Fargo are lower because there are far less applicants seeking to refinance their homes. But activists say despite the difference in overall applicants, Blacks are disproportionally rejected for refinancing and home loans, more than whites and other groups.

The report also said that 27 percent of Black borrowers who began an application with Wells Fargo in 2020 eventually withdrew it. That meant only one-third of the 17,702 Black homeowners who sought refinancing were successful.

With low interest rates, U.S. homeowners reportedly refinanced almost $5 trillion in mortgages over the past two years, the most since the early 2000s. The lower rates allowed white homeowners to save an estimated $3.8 billion annually by refinancing their mortgages in 2020, according to researchers at the central bank.

Black Americans reportedly make up 9 percent of all homeowners.

The mortgage business has long been viewed as a path for Americans desirous of accumulating wealth and capturing the American Dream. Historically, the industry has been riddled with redlining and racist lending practices that have made it more difficult for Blacks than whites to acquire property.

Across the country, Black homeowners in the past year, with the help of white friends and neighbors had second appraisals conducted on their property that was undervalued on the first one.

Andre Perry, a senior fellow at the Brookings Institution, in a 2018 study found that the average Black home was valued at $48,000 less than its White equivalent. The organization estimates the difference amounts to $156 billion in missing Black wealth.

The report told the story of Mauise Ricard III, a former Chicago resident who submitted an application to Wells Fargo to refinance his home in Sandy Springs, a suburb outside Atlanta.

A Microsoft engineer whose wife is a doctor, Ricard had a credit score higher than 800. Ricard was told in an email that “perhaps the area is not eligible” for a rapid valuation. Ricard was later told he would have to pay a higher 4.5 percent rate, even though interest rates were at historic lows. After repeated questions, Ricard’s application to refinance his home was denied.

Ricard went to another lender where he had an easier experience and secured a refinanced loan with a 3.35 percent rate.