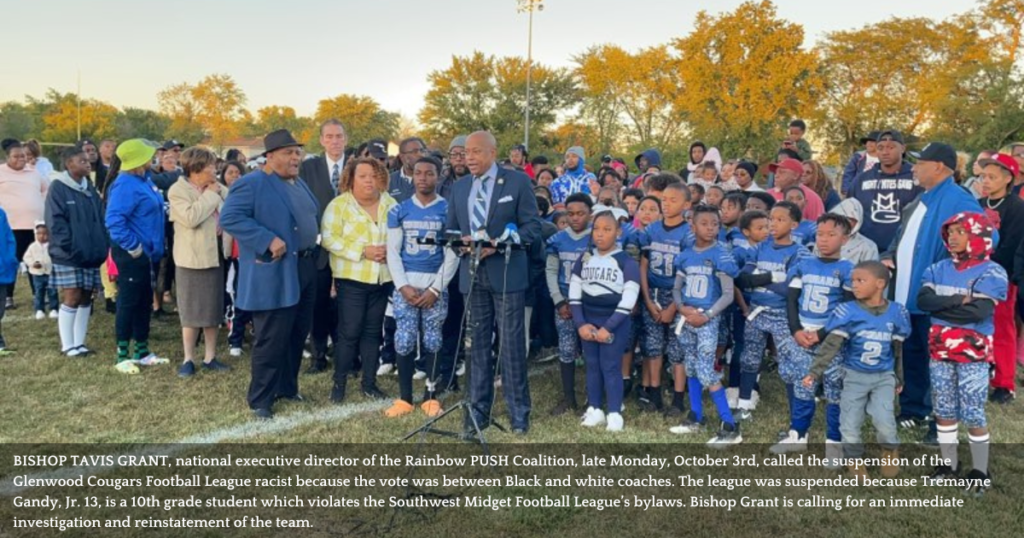 With 200 Glenwood Cougars football and cheerleaders’ athletic careers on the line, Bishop Tavis Grant, interim national executive director for the Rainbow PUSH Coalition said Rev. Jesse L. Jackson, Sr. is willing to meet with the league’s board and resolve this standoff that’s affecting 200 players and cheerleaders.

Grant said the suspension of the Glenwood Cougars Football League all because 13-year-old Tremayne Gandy, Jr. is a 10th grader, smacks of racism since the vote was made by white vs. Black coaches. The students, he said, don’t deserve this treatment.

“An independent party should come in to investigate the league’s board’s decision to suspend the Glenwood Cougars,” Grant said.

Bishop Grant told the media, “We are here to stand with 201 children and parents who have been grievously disenfranchised of their right to play sports.

“What has happened as an unintended consequence of this young man playing is what we pray for, what we work for, what we strive for is not just (for) athletics but academics and their standing tall, doing the right thing, playing by the rules, doing what we have all inspired to do.”

Grant said parents want their children to not just do well on the field but to do well and even better in the classroom,” Grant said.

“We are proud of Tremayne. We are proud of him,” Grant said. “What you see is a family, some of their coaches are former players. Their parents helped start this league and to have the right to play taken from him is unconscionable, unethical, and somewhat criminal.

“To have the vote (to suspend the league) to be cut down racial lines begs the question what this is really all about,” Grant said. “At the end of the day, there is no sporting organization that has this kind of rule that if you do better in the classroom, you can’t play on the field.

“The whole nation wants Glenwood back on the field and wants them to play ball like everybody else,” Grant said as the athletes cheered.

The suspension of the Illinois Southwest Midget Football League (SWMFL) was caused by the participation of 13-year-old Tremayne Gandy Jr., an African American student who is in the 10th grade.

Because of Gandy’s academically advanced status, he is in violation of the league’s bylaws. As a result, his entire 200 players and cheerleaders have been suspended.

Grant made his remarks while attending a press conference during a Monday, October 3rd rally held at the Hickory Glen Park, 1016 E. 192nd St., in Glenwood, Il, along with league parents, coaches, supporters and players.

With Rev. Jackson’s negotiating skills and proven record of rescuing scores of prisoners from abroad, Bishop Grant believes his mentor can break the stalemate between the board, the league, and its bylaws.

Surrounded by the pee wee players and standing by Bishop Grant, Gary Richardson, the team’s coach, said, “This young man here is what it is all about. This is our future and that is what I’m most proud of that we all stand together and support this young man.

“I’m happy. The last time I looked at him, he was 12 years-old in seventh grade and now he’s in 10th grade, not 8th, not 9th but 10th grade,” Richardson told reporters. Saying Gandy is getting ready to go to college, Grant called that academic feat “extraordinary.”

And that is why Bishop Grant wants Rev. Jackson to serve as a mediator because unless the league’s suspension is reversed, the Glenwood Cougars must forfeit their final four games and will not be able to participate in the playoffs.

And that is why Bishop Grant and Rev. Jackson are calling for an immediate investigation of the suspension to quickly resolve this issue.

“We think it is an overreach and out-of-bounds to penalize the student for achieving a goal and then not affording him, his parents, the coach and the other student athletes due process,” Grant told the Chicago Crusader referring to Gandy.

“This board must right this wrong and has the moral obligation and responsibility to do so. It is the reason why we are calling for an investigation and an immediate reinstatement.

“Many of these children are the children of children who go back some 30 years being a part of this league,” Grant said. “Many of the coaches are former players in this league, and it is only left up to one’s own suspicion how this decision was cut along racial lines.

“The white coaches voted against the Black coaches. That’s a matter of fact,” Bishop Grant said. “This is the kind of behavior over and over again where children of color are subjected to policies and procedures that are meant to do one thing but in application do another.

“The unintended consequence of this was an underestimation, perhaps, of the potential of the program and the promise of the children in the program.

“Here is a young student athlete who was not focusing on necessarily scoring on the football field as much as his scoring in the classroom,” Grant said.

“His scoring in the classroom superseded his scouring on the football field. There is just no rational, reasonable, logical means by which you can justify suspending the children who represent five different teams in this program,” Bishop Grant stated.

He was impressed upon seeing this suspended team still playing and practicing “knowing that they would have to forfeit the games. “They nevertheless showed up, suited up and played the game despite knowing that the game would not be counted.

“This is what programs like this are all about teaching the ethics of sports, sportsmanship and good citizenship, and this board must answer to their parents,” Grant said. “That is the highest of sportsmanship, citizenship and the kind of character that we should invest in. It is what we should fight for, and we should preserve. Grant said the parents spend their “hard earned money and resources, travel, lodging and equipment season-to-season.

“Many of these children are just like Tremayne and have been in this program since their formative years. To have this taken from them by adults who could simply sit in a room, take out a piece of paper, change the rules and make it rewarding that you are promoted, rewarded that you are doing well in school and fix the problem and not the blame.”