“The Courier” is a true-life spy thriller, the story of an unassuming British businessman Greville Wynne (Benedict Cumberbatch) recruited into one of the greatest international conflicts in history. At the behest of the UK’s MI-6 and a CIA operative (Rachel Brosnahan), he forms a covert, dangerous partnership with Soviet officer Oleg Penkovsky (Merab Ninidze) in an effort to provide crucial intelligence needed to prevent a nuclear confrontation and defuse the Cuban Missile Crisis.

Now I had to go into deep research to succinctly convey just what the Cuban Missile Crisis was about. I learned that Nikita Khrushchev led the Soviet Union during the height of the Cold War, serving as premier from 1958 to 1964. Relations between the Soviet Union and the United States deteriorated somewhat in 1960 when the Soviets shot down an American U-2 spy plane deep inside their territory.

Though he largely pursued a policy of peaceful coexistence with the West, the Cuban Missile Crisis began after Khrushchev positioned nuclear weapons 90 miles from Florida.

Cold War tensions reached a high point in October 1962 when the United States discovered that Soviet nuclear missiles were stationed in Cuba. The world appeared to be on the brink of nuclear conflict, but, after a 13-day standoff, Khrushchev agreed to remove the weapons. In return, U.S. President John F. Kennedy, who one year earlier had authorized the failed Bay of Pigs invasion, publicly consented not to attack Cuba.

And it is this averted attack that is the subject of “The Courier.” Wynne and Penkovsky form a personal bond and risk everything to end this crisis, so much so that Penkovsky, who is in real life executed for his part in the spy effort, is remembered as “the spy who saved the world.”

This film gave me a great glimpse of the Cold War as it concerns Khrushchev, the Soviet Union and the United States in the early 1960s. Cumberbatch, as Wynne, is just happening along trying to sell his products, and he’s approached by the CIA to go undercover as a spy. But he’s not really gathering any information; he is just used as a courier to bring intelligence back from Russia to London—mostly in the form of a tiny camera with crucial information that the United States needs. He and Penkovsky have a relationship as it pertains to the mission but they also cultivate a personal relationship. After so many meetings back and forth in Russia and in London, the two men begin to care about each other and each other’s families. 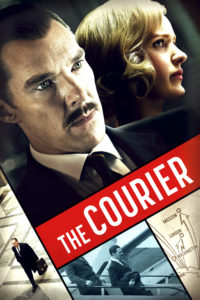 The espionage presented in the film to depict real life events of the era is both nail biting and intriguing. Wynne juggles to keep his business away from his wife, played by Jessie Buckley, who thinks he is having an affair.

Penkovsky is crushed when he learns that the Soviets have identified him as a spy, and he won’t get much help from the CIA. I became vested in the film and became anxious about what was to come. It’s awful to see the transformation of Wynne once he is identified as a spy and tossed into a Russian prison, where he remained for about two years.

The Crusader was invited to join a private virtual panel discussion that included two representatives from the International Spy Museum in D.C. and a former CIA staff member. The director, Dominic Cooke, said that he chose Cumberbatch to play the unassuming businessman because Cumberbatch loves to be pushed in any role that he plays. “The Courier is a spy story with a human element, and we don’t see movies like this,” Cooke added. “It has a warm, emotional element to it.” When the scout from Hollywood went to Moscow to search out places to shoot the film, for two weeks “it was grey, gloomy, grimy, snowy and slush filled.” This description aptly describes the Moscow that I have seen in so many films. “The Courier” is a great history lesson, which peels away the layers of that time in history, and the two main characters play their roles superbly.

Take a look at the trailer by searching: [https://www.thecouriermovie.com/videos/].

“The Courier” is playing at some theatres now and will be available to rent for $19.99 through On Demand platforms such as Apple TV, Amazon Prime Video, VUDU and cable providers starting April 16, 2021.