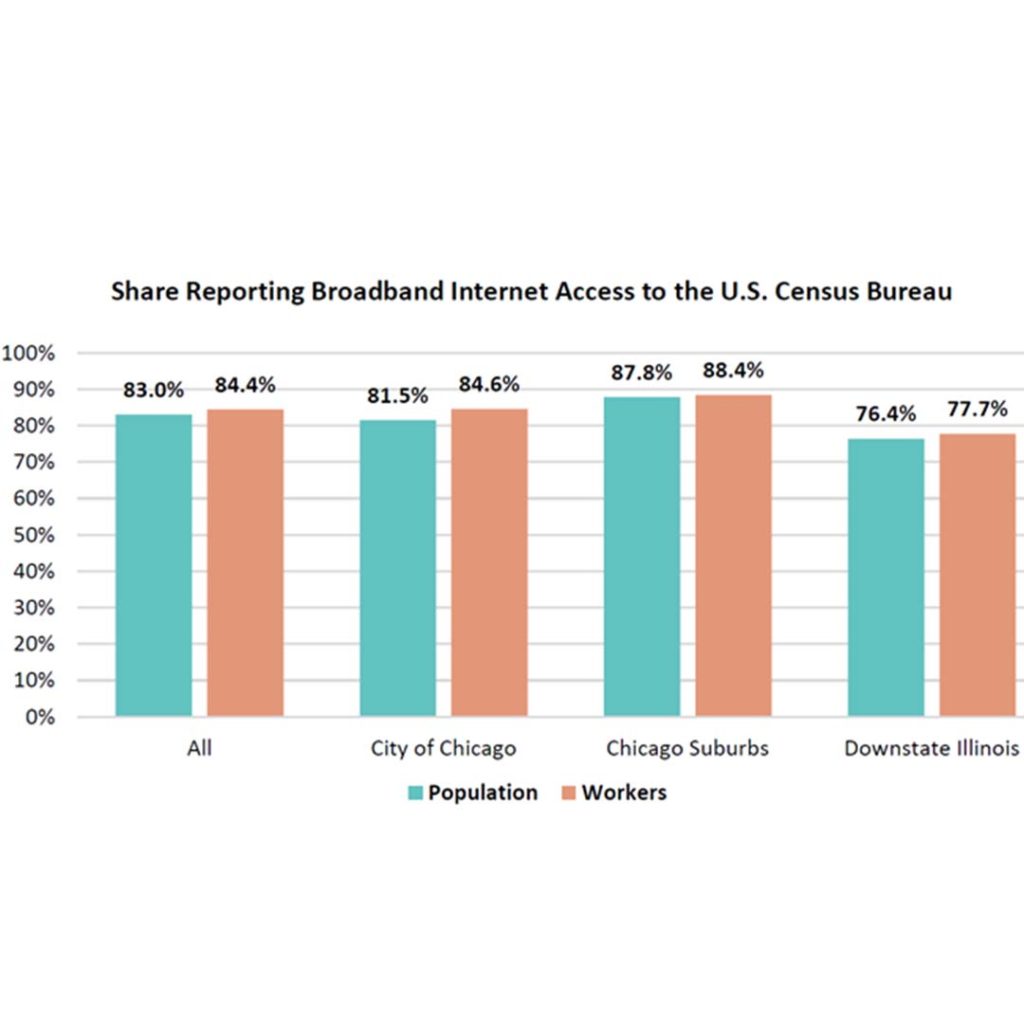 A $400 million investment in broadband internet infrastructure approved by Illinois lawmakers in 2019 could pay for itself by added tax revenues alone within four years of completion of construction, according to a new study.

That’s according to a report by the University of Illinois Project for Middle Class Renewal and the Illinois Economic Policy Institute, which estimated an additional 238,000 households, businesses and farms would have new internet accessibility as a result of the state funding combined with at least $100 million in new federal funding and other non-state funds.

ILEPI is a nonprofit research organization with strong ties to organized labor, while the Project for Middle Class Renewal is housed in the UI School of Labor and Employment Relations and has a mission of “elevating public discourse” on worker-related issues to promote middle-class jobs and reduce poverty.

Their report found the broadband expansion has several implications, from economic impacts in the billions of dollars to social impacts such as access to telemedicine that are more difficult to quantify.

“The economic aspect of the internet was realized and harnessed fairly quickly after its invention. But the social impact of the internet, I would say it’s still kind of being discovered, being researched,” Andrew Wilson, a policy analyst for ILEPI and a report author, said in an interview. “And so, that’s why I think it’s still important to – yes, the economic reasons are important and we’ve shown them – but also it’s like telehealth, things like access to school, things like access to jobs and all that are important from a social aspect too.”

The social importance was shown at the outset of the COVID-19 pandemic, as those who could work from home were able to maintain jobs during stay-at-home orders, and students with internet access fared better as schools were shut down.

From a direct economic standpoint, the broadband expansion will boost worker wages by $843 million annually, according to the study, while creating over 25,000 short- and long-term jobs.

That includes 14,400 construction-related jobs, about 38 percent of which would be subject to the prevailing wage rate, and 11,400 jobs maintained afterward.

Income, sales and property taxes would increase by $126 million during the construction and installation phase, according to the study, and by $77 million every year after, not adjusting for inflation.

The study analyzed the U.S. Census Bureau’s American Community Survey data which showed about 83 percent of Illinoisans have internet access, and that number was expected to grow to 87 percent because of the new funding.

“Access,” per the study, was defined as a home, farm or business’s ability to connect to internet infrastructure at an affordable cost.

Dr. Robert Bruno, a professor at the UI School of Labor and Employment Relations and director of the Project for Middle Class Renewal, said state and federal investment contributes to affordability.

“For people who have not had access, it certainly isn’t a want for it or an unwillingness to use it.” he said, noting private companies usually invest where they can make a profit. “This is where, of course, the state contributing to this essential infrastructure in the same way you would build roads and highways, it has a positive impact on affordability.”

The report also outlines a “digital divide” between urban and rural areas, as 82 percent of the city of Chicago, 88 percent of its suburbs and 76 percent of the rest of the state had internet access per an analysis of 2017-2019 ACS data.

Wilson likened the current divide in internet access to an electricity divide in the 1930s that led President Franklin Roosevelt and Congress to establish the Tennessee Valley Authority to, among other things, increase rural access to electricity.

“It’s the same thing now, that everything you need to do needs the internet,” Wilson said. “And so you get places that had electricity, because they invested in it, they could afford it, and places that didn’t. You’re seeing the same thing now where places who could, when it was expensive, invested in (internet access), and then places who couldn’t didn’t, and now we’re playing catch up.”

To drive that connectivity number to 100 percent statewide, the study found, it would require about $3 billion in funding from state and non-state sources.

That number was based on the expenditures that have already taken place since 2020 as part of the Rebuild Illinois expansion.

That included $162 million – $73 million from the state which was matched by $89 million in federal and non-state funds – expanding access to 39,000 homes, businesses or farms at a cost of about $4,200 per location.

Frank Manzo, executive director of ILEPI and a study author, said the state’s dollars might even go further than the study initially projected, as Illinois can apply for additional federal grants beyond the baseline $100 million it will receive from the recently-passed federal Infrastructure Investment and Jobs Act.

The study also found that there is greater earning potential in homes that have access to the internet than those that do not.

With factors such as marital status, household size, gender identification, race and education attainment controlled, the analysis showed those with internet were 1 percent more likely to be employed than those who had no access. That equates to 6,800 new jobs that pay about $43,600 per year, per the study.

Those with internet earned about 5 percent more than those without internet when work hours, industries and sectors were controlled, a gain of about $2,200 per year.

The study authors said the income increase for those with internet access can partially be explained by people having the ability to search for higher-paying jobs if they have an internet connection, but internet access itself may also make a worker more valuable.

“It’s a job skill,” Bruno said. “It’s part of the infrastructure that you as an individual need if you’re going to be job ready…You’re much less competitive if you don’t have that access.”

Bruno said some research suggests the digital divide is a major contributor to income inequality.

“The technology is there, but it’s paying dividends for only certain people in the in the job market,” he said.