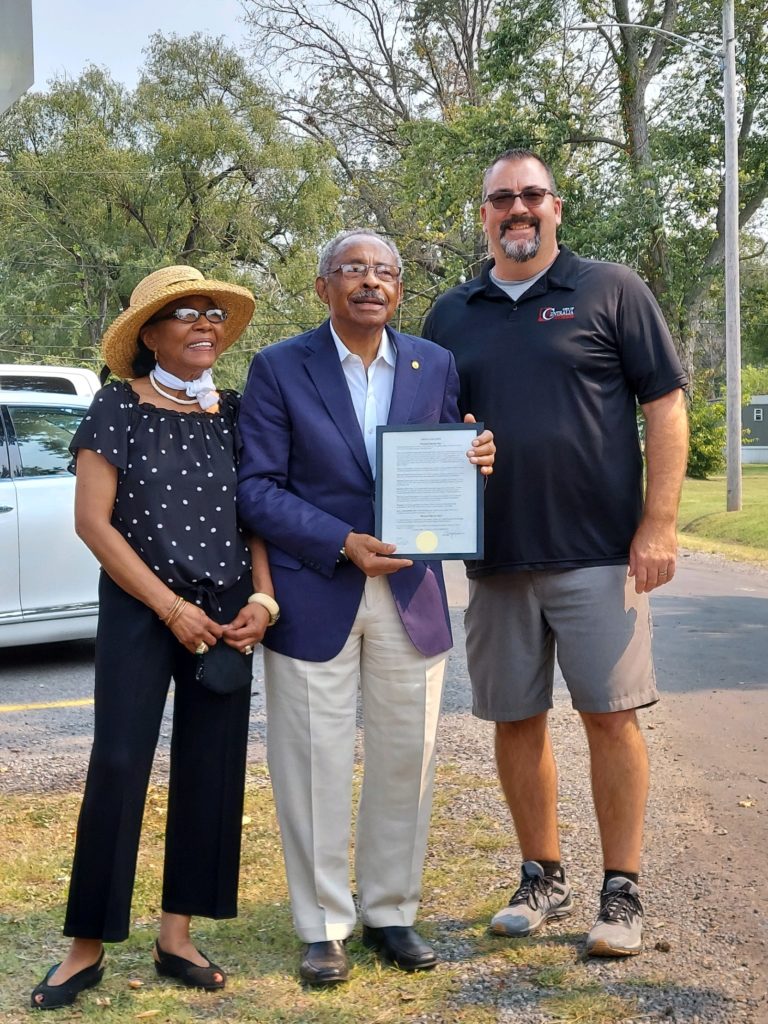 Over the years, people throughout the State of Illinois and the nation have had an occasion to honor and recognize the achievements of former United States Senator Roland Burris. On September 11, 2021, his hometown of Centralia bestowed a very special honor with the proclamation of “Roland Burris Day.”

The signing of the proclamation by Centralia’s Mayor Bryan Kuder and the City Council of Centralia also included the dedication of a roadway in his honor. A portion of Maple Street from East Broadway to East Rexford was named “Roland Burris Way.” More than 100 guests witnessed the ceremony to unveil the street named in his honor. Guests included his family members, who traveled from across the nation for the occasion, as well as friends, classmates and residents.

Currently, a Chicago resident, Senator Burris and his wife, Dr. Berlean Burris, traveled to his birthplace in southern Illinois a day early to attend his 66th Centralia High School Reunion. Centralia has more than 13,000 residents according to the city’s website and continues to be predominantly white as it was in his youth.

Centralia is not just the place where former Senator Burris was born, it was also where he determined to be more and do more to advance his family and his people. As clearly acknowledged in the “Roland Burris Day” proclamation. His entire career is filled with him achieving “first” recognition as an African American.

“Whereas Roland Burris was born in Centralia in 1937 on Sadler Street. At the age of five, he moved to 429 N. Maple Street and grew up in that home.

Whereas Roland Burris graduated from Lincoln Grade School and Centralia High School and later earned a degree in political science from Southern Illinois University Carbondale. Upon graduation from Southern Illinois University, he won an exchange student scholarship to the University of Hamburg in Hamburg, Germany. In 1963, Mr. Burris earned a law degree from Howard University. Burris worked as a federal bank examiner following graduation from law school and then as a bank vice president. He was the first Black bank examiner in America and the first Black vice president of the largest bank in the State of Illinois.

Whereas Roland Burris served as the administrative officer in the Governor’s cabinet in charge of central management services for the State of Illinois from 1973-1977.

Whereas Roland Burris became the first African American elected to statewide office in Illinois during the 1978 general election when he was elected to become the Illinois State Comptroller.

Whereas Roland Burris was an appointed United States Senator by the Governor in 2009 to succeed and fill the term left vacant by President Barack Obama. He served on the Armed Services, Homeland Security and Governmental Affairs, and Veterans Affairs committees.

Whereas Roland Burris was the first member to be inducted in Centralia’s Hall of Fame by Mayor Mel Hart in 1992 and he was selected for the National Association of State Auditors, Comptrollers and Treasurers (NASACT) Hall of Fame in 2020.

Whereas it is entirely appropriate that Roland Burris also receive recognition for his contributions to the United States, State of Illinois, and community of Centralia.

NOW, THEREFORE, BE IT RESOLVED, that I, Bryan Kuder, Mayor of the City of Centralia, do hereby proclaim September 11th, 2021, as “Roland Burris Day.”

In Centralia and call its significance to the citizens of the City of Centralia and the surrounding communities to celebrate the tremendous accomplishments of Roland Burris. In witness whereas, I have hereunto set my hand and caused the seal of the city of Centralia to be affixed. Passed this 11th day of September 2021.”