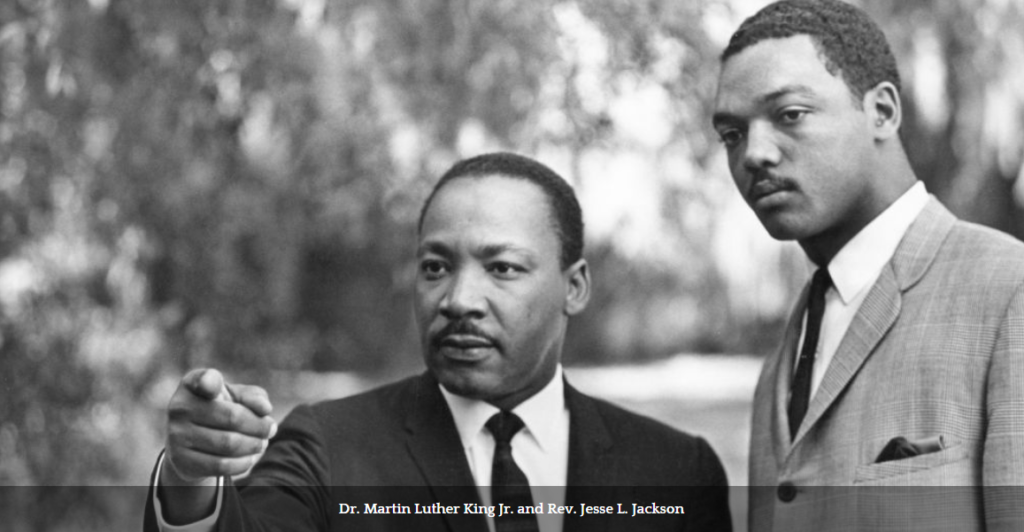 The historic walk will take you to the Chicago Theological Seminary, which was the first place Rev. Jackson met with his supporters.

In 1966, Dr. King appointed Rev. Jackson to head the Chicago branch of the Southern Christian Leadership Conference (SCLC), which was the economic arm of the Civil Rights organization. Rev. Jackson had a dream and a mission to continue Dr. King’s agenda and with results.

He was and continues to follow Dr. King’s agenda, which was the core of the Civil Rights Movement at that time. Dr. King said on July 11, 1967, “The fundamental premise of Breadbasket is a simple one. Negroes need not patronize a business which denies them jobs, or advancement [or] plain courtesy.”

In January of 1967, Dr. King said, “Many retail businesses and consumer-goods industries deplete the ghetto by selling to Negroes without returning to the community any of the profits through fair hiring practices.”

On Saturday, Rev. Jackson and Rev. Martin L. Deppe, a white minister who authored the book, “Operation Breadbasket: An Untold Story of Civil Rights in Chicago,” will talk about the birth of the economic arm of the organization on the first day of the organization’s anniversary month.

Operation Breadbasket was modeled after a program developed by Leon Sullivan in Philadelphia, Pennsylvania. It was Dr. King who took Sullivan to Atlanta in October of 1962 to meet with Black ministers about duplicating the program. His goal was to use the power of the Black church to create economic opportunities within their own communities. King’s motto was, “Keep a slice of bread in your communities.”

While the road was bumpy and at times Operation PUSH was homeless, young Jackson was up to the fight, intent on continuing his mentor’s mission. The first place Rev. Jackson met with his supporters was at the University of Chicago Theology Seminary. He then met at Mt. Pisgah Missionary Baptist Church, then the Parkway Ballroom, the Capitol Theater, Tabernacle Church and the Met. This was the makings of Operation Breadbasket.

In an interview with the Chicago Crusader, Bishop Grant said the importance of anniversary month “is a time for us to reflect, remember and reminisce on the work and legacy of Rev. Jackson, and it is an opportunity to connect with new partners and new stakeholders as we grow and matriculate as an organization having started in 1971.”

He said Operation Breadbasket began as a social, economic justice organization. “We are serving broader and deeper than ever before. What is more important is that we are seeing how Rev. Jackson has worked and touched the lives of people literally all over the world. A small idea became a great idea that flourished and continues to grow today.”

Bishop Grant described the young Jackson as an “apostle of economic justice and the Mayor of the Poor Peoples City in Washington, D.C. When you put those together as a collaborative, it is what we have now called Rainbow PUSH Coalition.”

Bishop Grant was referring to May 22, 1968, when Rev. Jackson was appointed mayor of Resurrection City. Tents were erected near the Lincoln Memorial in Washington, D.C. where more than 3,000 of the Poor People’s Campaign had begun to camp.

Bishop Grant said anniversary month “is a real reminder of the work of both Dr. King and Rev. Jackson and how it has in its own way impacted the course of history politically, socially and culturally in ways that other groups have tried to start and some have failed. Some still exist, but one seed has proven to bring about a great harvest that all of us can recapture.”

Grant pointed to some of the achievements Rev. Jackson has driven, like initiating the Black Expo, the naming of King High School and running for mayor of Chicago that led to Rev. Jackson suing the City of Chicago over the number of petitions an independent candidate has to file versus the machine candidates. The result is a more equal number of petitions today for independent candidates.

Back during Operation Breadbasket, which was established on December 25, 1971, Rev. Jackson had Chuck Jackson, called the Soul Saint, dressed in a white, black and green Santa Claus suit riding down State Street in a Christmas parade.

Rev. Jackson also had spaces in the South Central Store near 47th and King Drive, where he had spaces where Black vendors could sell their wares. Rev. Jackson and Rev. Deppe on Saturday will take you on a ride down the Operation Breadbasket Road of Remembrance.

Rev. Jackson will also pay homage to the many volunteers who have and continue to help him complete Dr. King’s unfinished business. Beginning Saturday, December 3rd, the Rainbow PUSH Coalition will be giving away 200 bags of groceries that contains a chicken.