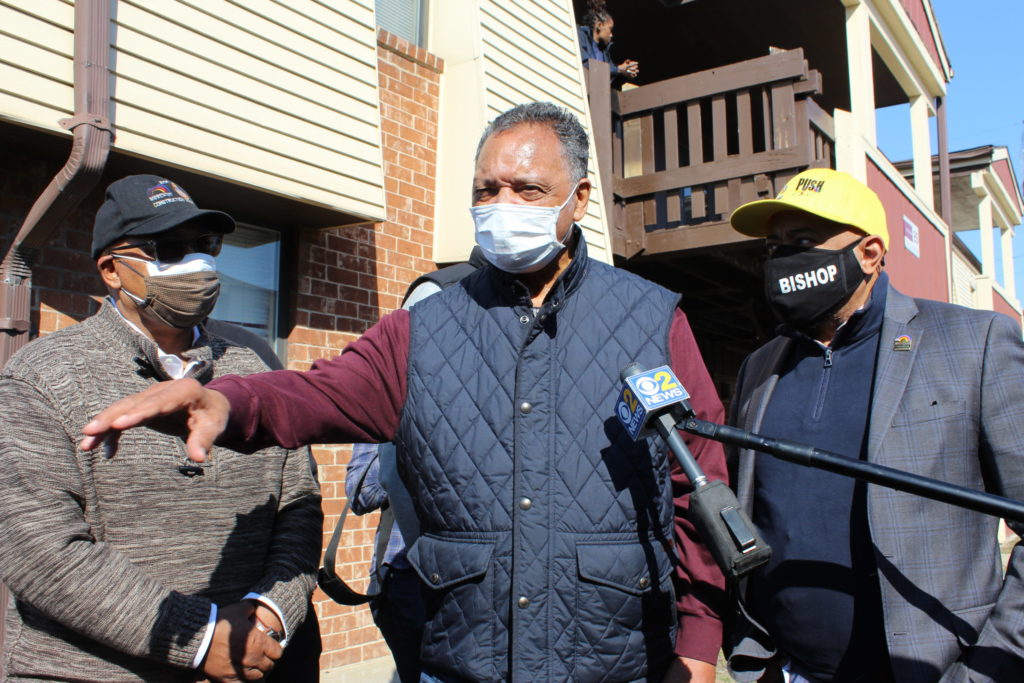 Tuesday was a busy day for Reverend Jesse Jackson, Sr. recently discharged from the hospital, Bishop Tavis Grant, national field director for the Rainbow PUSH Coalition, and the organization’s national youth director, Reverend Cameron Barnes as they fought for change in a HUD complex they call “a death trap.”

They raised the plight of residents living at Concordia Place, 13037 S. Daniel Drive, where there is “one way in and one way out…a death trap” for residents, especially during medical or fire emergencies.

After being urged to fight back, Concordia Place residents have launched a petition drive demanding that the Capital Realty Group, which manages the complex, make repairs many say are life-threatening.

Their fight for social justice began earlier on March 9 at the Rainbow PUSH Coalition headquarters when Jackson, Grant and Barnes met with Deborah Lewis, president of Concordia Place Apartments, and Dorothy Fords, who lives at the HUD complex.

They were waiting to meet with Harry Steif, a representative from the New York-based Capital Realty Group that manages the buildings. Jackson and Grant had hoped to lay out the concerns of the residents at a noon meeting with Steif at Rainbow PUSH Coalition.

The meeting almost happened, but Grant received a text from Steif’s secretary saying Steif had been exposed to COVID-19 and could not meet with the civil rights leaders. Strangely, Steif was sitting in his car outside of Rainbow PUSH Coalition’s headquarters, but refused to come in and drove away after seeing a CBS reporter and cameraman, who recently broke the story.

Jackson said the fact that Steif drove away after seeing the media shows that “it’s classical. They are afraid and have something to coverup.”

Determined to seek social justice for the residents who had asked for their help, Jackson, Grant and Barnes left for Concordia Place where earlier, reporters said a private security guard had banned their presence on HUD property.

Jackson and Grant boldly held a press conference with the duplex housing in the background, then toured several apartments to view conditions, including mold and infestation residents say are threatening the lives of their children.

Some residents, like Lewis, say besides dealing with the infestation, there are residents who are forced to pay 60 percent of their income towards rent when HUD’s stipulation is 30 percent.

Two weeks ago, management did not pay the dumpster fee, and the garbage disposal company took the dumpsters away, forcing residents to throw their garbage on the ground for four days. Residents also complained that their cars were towed when it snowed because some did not have proper tenant stickers costing them $200 to retrieve their vehicles.

“How can families survive if the more they make, the more they take,” said Grant. “It almost incentivizes poverty…You never break the cycle of poverty that way.”

“There are systematic issues that congressional hearings must address, and now is the time to eradicate them,” Grant said. “People want to get out of public housing, out of the cycle of poverty, but also there are people because it is profitable [who] don’t want them to get out. It’s a vicious cycle, and we got to do our best to break it.”

Flanked by residents standing outside their complex, Jackson encouraged the men, women and children to have hope, to fight back and not be afraid. Jackson called for congressional hearings to rectify the many housing violations.

During a press conference held in the lobby of the Rainbow PUSH Coalition, Grant said, “This is a classic civil rights issue that brought Dr. King to Chicago, slumlords, deplorable living conditions and exploiting the poor.”

“There is only one way in and one way out,” Grant said, calling that a dangerous situation.  He was referring to the 2012 fire at that complex which killed three-year-old Destiny Myles and one-year-old Jeremiah Myles—the children of Alicia Myles, 25—when firemen could not reach them in time.

To get to the units, firemen had to travel a half-mile and more than a dozen speed bumps—precious time they say was needed to save the children.

Management has locked the back entrance to the compound forcing residents to enter and exit one way. “This is unacceptable. It’s immoral and unhealthy, and we are not going to stop until we get change,” Grant said of the fire hazard.

Jackson, Grant and Barnes toured several apartments, including that of Tamara Jackson, a mother of five. A resident of the complex for 12 years, she has lived in her three-bedroom apartment for the past six years. She showed the mold that is in every room of her unit.

“They need to gut this complex, like the other buildings,” she said. “We smell sewage. We can change management, but we are still going to have the same ongoing problem with the infestation, the mold.  There was a hole in the wall, and a maintenance man covered up the mold…My kids have headaches. It’s embarrassing.”

“There are no accommodations for four communities: Altgeld Gardens, Golden Gates, Concordia Place, Riverside Village. There is no business here. There is a food desert, an education desert and an economic desert in these communities,” said Barnes.

Grant said, “It’s not just a food desert. It’s a death trap…environmental injustice, sewage coming up in the water, ceilings peeling, mold coming up, and the children have no place to play. We’ve had enough. You cannot get away with fighting the poor. We’ve come to fight for the poor, and when we fight, we win.

“I just met a woman who is paying 60 percent of her income, and they are using intimidation means of making them turn over confidential information so they can track their income as if this is a minimum-security boot camp,” Grant said

One resident said she has not seen her son in five years “because they won’t give residents a parking pass to visitors to come and visit their family members,” Grant said. “This is immoral, unethical, and we believe it is illegal.”

Lewis told reporters they are tired of living with the mice, termites, roaches, mold, and the intimidation from management.

Rev. Jackson called Jim Cunningham, Midwest regional director of HUD, who fired off a letter to Sam Horowitz of Capital Realty Group with a cease-and-desist order.

In the order signed by Debbie Gray, asset management division director of HUD’s Midwest Multifamily Asset Management division, she wrote HUD has received credible reports that staff is entering units without 48 hours notice. “Please direct your staff to cease and desist from entering units without 48 hours written notice. If a tenant refuses their admission due to COVID-19 fears, they are to note that in their unit log sheet and don’t enter that household.”

In addition, HUD is demanding that Capital Realty Group survey conditions of each unit and report weekly to them on the conditions and actions taken to rectify all identified conditions.

HUD also warned the management’s staff that they may not enter any unit without 48 hours written notice to the head of the household except in medical or safety conditions.

Regarding tenant complaints about their cars being towed costing them $200, denial for family guest visitation passes and kicking reporters off the property, Gray said, “Please direct your staff to comport themselves in a professional manner in all dealings with residents and please take appropriate personnel actions in the event staff act in any way that is unprofessional or inappropriate.”

Reverend Jackson is calling for another meeting with the residents at their complex this Saturday, March 13 with HUD representatives present. The time and site have yet to be determined.