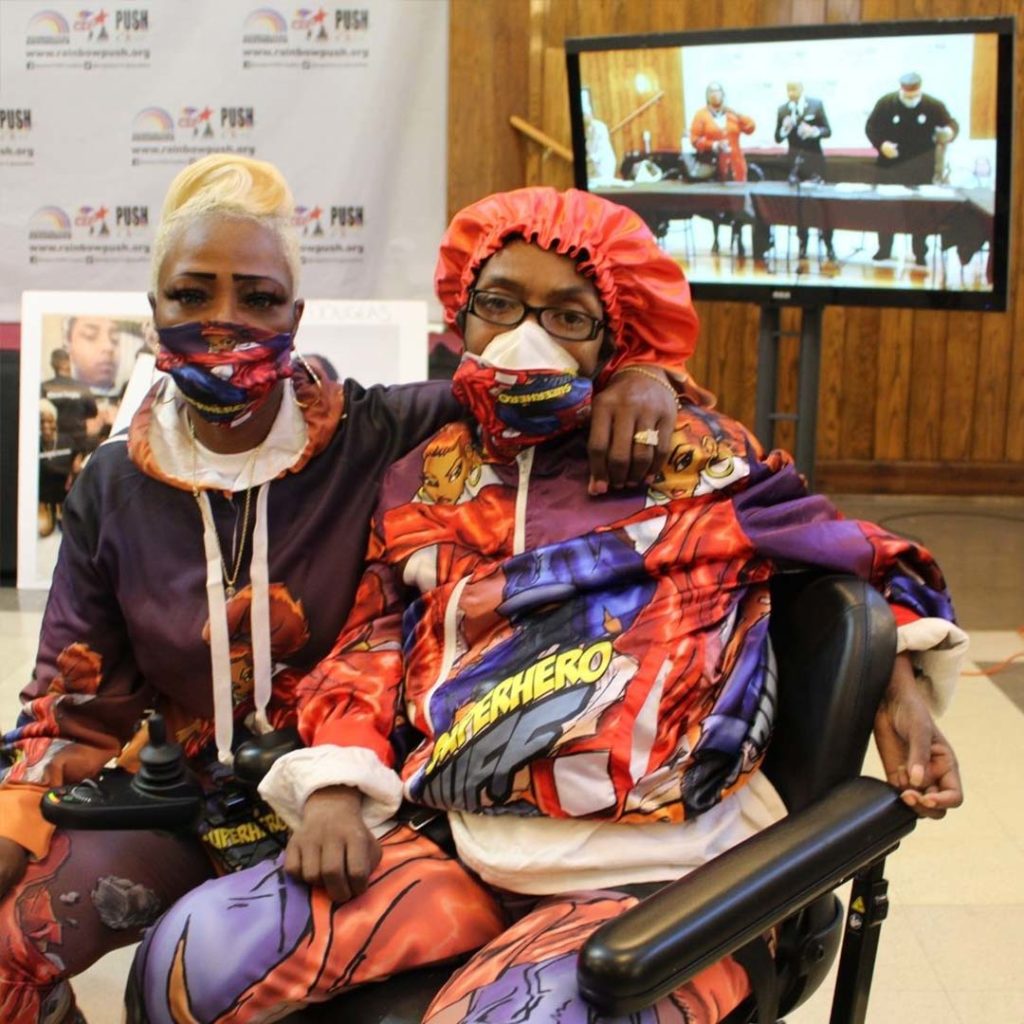 Mothers and former inmates of the Menard Correctional Center testified about the horrors their sons are enduring at the infamous 144-year-old prison last Saturday at the Rainbow PUSH Coalition. They testified that the horrors include: guards beating the men, unfairly ticketing them when they protest and throwing them into solitary confinement, as well as putting young inmates in areas that cause them to be raped and they refuse to transfer them closer to home when family members are on medical alert.

The testimony was during a symposium held at the Rainbow PUSH Coalition, 930 E. 50th St. The symposium was presented by Bishop Tavis Grant, national field director of the Rainbow PUSH Coalition, and sponsored by Frank Chapman, national executive director of the National Alliance Against Racist & Political Repression. It was Chapman who received 273 complaints from Menard prisoners and parents requesting help from a prison they called “The House of Horrors.”

Known as the “master organizer,” Chapman also knows first-hand about the unfairness in the justice system, having been wrongfully convicted in 1961 of murder and armed robbery and sentenced to life plus 50 years in the Missouri Department of Corrections. During his incarceration, he became a freedom fighter, successfully desegregating the Missouri Prison system. In 1971, Chapman won his case, and told the parents he won’t stop until he wins the Menard cases as well.

Bishop Grant and Chapman called on Governor Pritzker and Black Illinois elected officials to investigate allegations of prisoner abuse by Menard guards including complaints of mold, running water on the walls, unfit food, unfair ticketing of inmates who go on hunger strikes and an end to being placed in solitary confinement, sometimes for months for writing up the guards.

In testifying before the committee, Bishop Grant asked, “Did you know since 1970, the United States incarceration rate has increased by more than 500 percent? That more than five million Americans are prohibited from voting due to a prior felony conviction? And one in three Black men, and one in six Latino men will be incarcerated in their lifetimes?

“The Illinois Department of Corrections (IDOC) staff has a professional and moral obligation to protect the safety and health of individuals sentenced and to treat them with dignity. The mental health of the individuals in custody is a top priority,” Bishop Grant said. “Illinois ranks 48th in the nation regarding health care spending in prisons.”

Bishop Grant said the IDOC has reported over 42 percent of its prisoners have mental illness, “though prisoners’ advocates who say due to the lack of adequate screening, and the stigma around mental illness, that figure is likely incorrectly low,” Grant said citing a report from the Uptown People’s Law Center.

“Medical care in Illinois’ Department of Corrections isn’t good either. A court appointed expert found that dozens of people in Illinois prisons have died due to poor medical care,” Bishop Grant stated. “In December, Illinois agreed to a consent decree which commits them to make vast system-wide improvements including increasing the quality and quantity of medical staff.

“IDOC has known for years that it has a serious problem. Seven years ago, the first independent report was issued by a neutral court-appointed expert, raising alarms about the state of mental health treatment in Illinois prisons. Four-years ago, a neutral, court-appointed expert issued a detailed report highlighting the failings of the medical care provided to prisoners.

“Last fall, a second, neutral expert found that most of the problems identified had not been corrected, and many had actually gotten worse. It is long past time for the state of Illinois to stop defending the existing system,” Bishop Grant said. “They must begin the hard work of fixing it.”

Reflecting on the era of U.S. slavery, Bishop Grant said, “America’s legacy of slavery, economic reliance on a captive labor force, and racial biases have resulted in a carceral system that has spiraled out of control. The passage of the 13th Amendment in 1865 guaranteed the end of chattel slavery except for those convicted of crimes. Racial and economic anxieties following the collapse of the plantation model culminated in the passage of Black Codes and later Jim Crow laws which enlisted the criminal justice system in its campaign for racial control,” reflected Bishop Grant.

“These laws, fueled by racist stereotypes which associated blackness with criminality, ensured that swarths of predominantly Black men would be caught up in the carceral system in perpetuity. Many contemporary police tactics can be traced back to ‘slave patrols,’ militia groups tasked with policing enslaved people’s behavior and re-capturing runaway slaves.”

Among many who testified were Octavia Towns-El, the aunt of Steven Douglas who has been at Menard Correctional Center for five years and who was jailed for three years at the Cook County Jail for a crime he says he never committed. With Douglas’ invalid, wheelchair-bound mother sitting by her side, she said her nephew was more than a mile away when a known gangbanger was beaten and shot to death. “A year later,” she said, “detectives from 51st Street came and got Steven for questioning, and he never came back home.

“The detectives got two prisoners from prison to testify against Steven in exchange for reducing their sentences,” said Towns-El. “Their witnesses want to recant, but they are too afraid to because they fear for their lives.”

Douglas was convicted and sentenced to 55 years by Judge Domenica A. Stephenson, who was sharply criticized by Towns-El for acquitting Chicago police officer Thomas Gaffney, former police officer Joseph Walsh and retired Detective David March who were involved in the murder of Laquan McDonald. Officer Jason Van Dyke, who shot the teen 16 times, was convicted, but Stephenson “let them off the hook,” Towns-El said.

“The judge gave Steven 55 years though 45 was the maximum. That is unfair, wrong. We want a new trial, but the judge said if we come before her again, she will deny it. My nephew didn’t murder anyone. At the time, he had two jobs and had dropped out of college to take care of his mother,” a tearful Towns-El said.

Ald. Jeanette Taylor (20th) attended the symposium as did Rep. LaShawn Ford (8th). During the symposium, a relative had several Menard inmates to call in with similar horror stories. They begged for help in ending the abuse.

Janel Charles, testified about Michael Andrew Jackson, who died in Menard on July 11, 2017. Adolfo Davis wiped away tears several times as he talked about the abuse he suffered at Menard.

Anthony Gay, who spent 24 years in prison, 22 of which were sent in solitary confinement, testified how he self-mutilated just to get human attention. Having won one case against him pro se, he is facing yet another trial after Rock Island police attacked him and had federal charges placed against him. Chapman is having people sign up for a bus ride to Peoria as a show of support when Gay goes to trial.

Other cases included testimonies from Alicia Gill, the sister of Michael Minnifield and his mother, Alicia Owens-Boyd, said her son is serving a 56-year sentence in Menard. She said he is allegedly being tortured. He was arrested in 2009 at the age of 22. He was sent to Menard, was then moved to Stateville where he was beaten, and pepper sprayed by guards for not hearing a verbal order. He was then transferred back to Menard, and since being held there he has had false tickets written against him for filing grievances, been denied access to food and medical care and is currently being held in segregation and has guards threatening to kill him.

Darlisa Kendall, the mother of Isaiah Brady said her son is serving a 53-year sentence at Menard. Since being held there, she said her son has had manufactured crimes pinned against him, has had grievances unjustly denied, been denied access to food and medical care, is currently being held in segregation, and had guards threatening to kill him. He has lost 35 pounds since being in segregation.

Most recently, Brady was falsely accused of biting a guard. He suffers from mental illness, and he has been denied treatment since being at Menard. He was pulled out of the health care unit by guards who claimed they found a knife in his cell after he had suffered a grand mal seizure. The seizure caused him to suffer a head injury. In addition, he was beaten severely by guards while recovering from this seizure. He was then threatened with an additional 15 years for having bitten this guard, which was unsubstantiated, according to Chapman.

“Brady rightfully sought to enter a plea of not guilty, but he was betrayed by his public counsel who entered a guilty plea for punching a guard in the chest, adding an additional three years. We have filed a motion to fight this charge,” Chapman said.  “Not only has he not received treatment for his mental illness, but he has been targeted and had guards take advantage of this illness to bring these false charges against him.”

Rhonda Thrailkill, the mother of Chaz Thrailkill testified that her son is serving a 30-year sentence in Menard prison. Chaz has been incarcerated from Stateville, to Pontiac, Menard, Pinckneyville, Dixon and back to Menard Prison. While in solitary confinement for the past year, he refuse to eat because Menard Prison rationed more than half of the trays of food to the inmates in solitary confinement.

“They threatened him and his mother that they would insert a feeding tube inside his stomach on the 28th day of his hunger strike when he was already previously malnourished. After going back to solitary confinement, Chaz was put inside a cell without no electricity or light for over a month. Menard Prison has ignored his grievances, and threatened his life, unjustly denied him contact with his family and access to his funds,” Chapman stated.

Kenyatta Brown is serving a 173-year sentence in Menard prison and has won multiple lawsuits against Stateville prison where he was held before being transferred to Menard. In response to his success and determination in fighting back, Chapman said IDOC’s Internal Affairs allegedly retaliated against him. When he was moved to Menard prison, the guards attempted to force him to cut off his locks, brought false charges against him, and allegedly tampered with his legal mail.

Omarr Parks is serving a 6-year sentence in Menard prison. He was sent to Menard because he struggles with mental health issues, ADHD, and diabetes, which Chapman said he has not received the proper treatment. He has had no outside contact with his friends and loved ones, and he has lost a substantial amount of weight due to lack of food access in Menard. He is currently in segregation.

Chapman ended the nearly three-hour symposium with chants of “I believe that we will win.” He vowed to hold another symposium in the near future.