Less than a year before President Joe Biden nominated Rahm Emanuel to be Ambassador to Japan, the president received over $100,000 in campaign donations from the disgraced Chicago mayor’s brother, Ariel Emanuel, the wealthy powerful CEO of William Morris Endeavor talent agency in Beverly Hills, California.

Biden wasn’t the only recipient of Ariel Emanuel’s largesse. A Crusader analysis of campaign donations filed with the Federal Elections Commission shows that over the years, Ariel Emanuel gave thousands of dollars to 10 Democratic senators who will decide whether to confirm his brother as the next Ambassador to Japan. Many received donations from Ariel Emanuel as recently as last year.

One of them is New Jersey Senator Cory Booker, the only Black senator on the Senate Foreign Relations Committee who joined Republicans in voting in favor of Rahm Emanuel’s nomination.

Ariel Emanuel over the years also gave nearly $18,000 to then-California Senator Kamala Harris, who as vice president will cast the deciding vote— should the Senate end up deadlocked over Rahm Emanuel’s confirmation. Senator Dick Durbin of Illinois, a longtime ally of Rahm Emanuel who supports his nomination, received a total of $5,600 from his brother in 2019 and 2020.

Federal campaign records show that other prominent politicians who support Rahm Emanuel’s nomination also received donations from his brother in 2020. They include House Speaker Nancy Pelosi and South Carolina Congressman Jim Clyburn, both of whom respectively received $2,800 and $2,000 in 2020.

The campaign records show that Ariel Emanuel also gave campaign donations to Georgia Senators Raphael Warnock and Jon Ossoff less than a month before their historic runoff victories in the red state.

But Ariel Emanuel’s largest contribution was given to President Biden. On November 2, 2020, days before Biden defeated incumbent Republican Donald Trump in the General Election, campaign records show that Ariel Emanuel gave Biden a $97,200 donation to his victory fund and $2,800 to the Biden for President campaign fund. 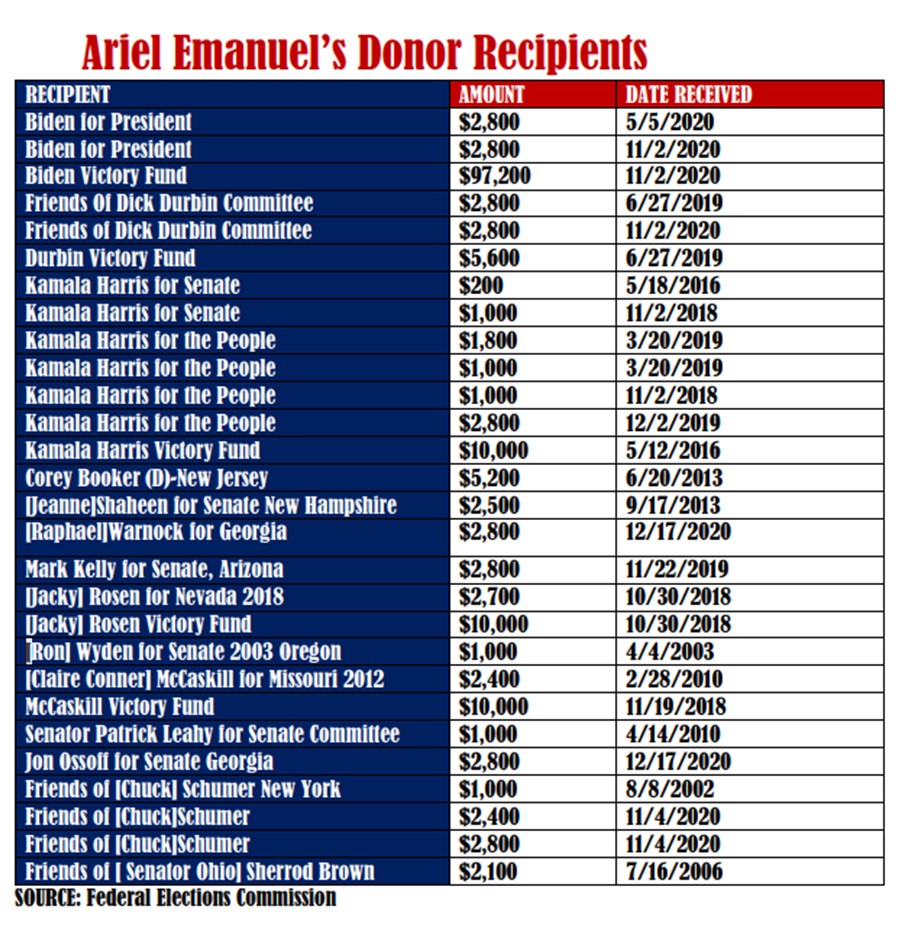 In 2013, Cory Booker, who enjoys close ties to Rahm Emanuel, received a $5,200 campaign donation on June 20, 2013, as he ran to replace longtime New Jersey Senator Frank Lautenberg, who had died weeks earlier.

That year, Rahm Emanuel and Jersey City Mayor Steven Fulop planned to hold a campaign rally on September 20 for Booker. Rahm Emanuel cancelled after a mass shooting at a South Side park in Chicago left 13 people wounded, including a 3-year-old boy.

To manage his 2013 Senate campaign, Booker hired Addisu Demissie, who was the field director for Rahm Emanuel’s mayoral campaign in 2010. He also worked for Obama and Hillary Clinton during the 2008 election.

On February 27, 2013, Rahm Emanuel and Booker, then-Mayor of Newark, New Jersey, participated in a forum together on the challenges of urban education reform during the United Way of Greater Los Angeles’ Education Summit at the Los Angeles Convention Center. Both have been known to support charter schools, which has had a devastating impact on public school districts throughout the country.

At a CNN town hall meeting during his Democratic presidential campaign in 2019, Senator Booker drew praise from Rahm Emanuel after he quoted a Hebrew scripture from the Torah, which he studied while at Oxford University.

“I actually think your Yiddish was pretty good,” Emanuel, the son of a Hebrew-speaking Israeli immigrant, told Booker. “I’ll get you into the synagogue. You’re just going to have to pay for the High Holidays,” joked Emanuel.

Booker responded, “I’m ready for the Dvar Torah this week and any synagogue that welcomes me to come speak, I’m ready.”

Like many Democratic senators who received campaign donations from Ariel Emanuel, Booker has been publicly silent on whether he supports the Ambassadorship nomination of Rahm Emanuel, who in 2014 campaigned in Chicago’s Black community while his administration suppressed the video that showed Laquan McDonald being shot 16 times by Officer Jason Van Dyke.

Booker, as the only Black senator on the Senate Foreign Relations Committee, did not attend the hearing or appear virtually to ask Rahm Emanuel questions.

During the confirmation hearings, it was learned that McDonald’s mother, Tina Hunter, did not know her son was shot 16 times until she was notified by a funeral home in Chicago.

Of the 11 Democrats on the Senate Foreign Relations Committee, Senators Jeff Merkley of Oregon and Edward J. Markey of Massachusetts were the only two to vote against the nomination.

That nomination now goes to the full Senate, where it is expected to pass. Vice President Kamala Harris, as the nation’s first Black president of the Senate, will cast the deciding vote in the event of a tie. As Biden’s vice president, she will likely vote in favor of Rahm Emanuel’s nomination.

Senator Dick Durbin, who along with Senator Tammy Duckworth, endorsed Rahm Emanuel the same day President Biden nominated him on August 20 this year. Durbin introduced his friend during the confirmation hearing before the Senate Foreign Relations Committee.

Ariel Emanuel had also given $2,800 campaign donations to freshman Senators Warnock and Ossoff on December 17, 2020, before their January 4 successful runoff elections, which gave Democrats control of the Senate. Warnock and Ossoff have been silent on whether they will vote to confirm Rahm Emanuel as Ambassador to Japan.

Campaign records also show Ariel Emanuel on the same day gave a $1,500 donation to California Congresswoman Karen Bass while she served as chair of the Congressional Black Caucus.

Born in Wilmette, Illinois, on Chicago’s North Shore in 1961, Ariel “Ari” Emanuel, 60, is Rahm Emanuel’s younger brother. He currently serves as the CEO of the William Morris Endeavor Agency (WME), the oldest operating talent agency in the world. Listed on federal campaign records, the agency bills itself as a global leader with top clients in sports, entertainment, media and fashion. On its website, the agency counts Elvis Presley and Marilyn Monroe among its biggest clients.

In 2020, WME’s total revenues were 3.5 billion, but that figure could have been even higher had the coronavirus pandemic not affected the entire media and entertainment sector. A week ago, Endeavor reportedly beat Wall Street forecasts in this year’s third-quarter forecast as it generated $1.39 billion and a net income of $63.6 million.

In 2014, WME managed Oprah Winfrey’s Live Your Best Life Weekend, an eight-city tour that aimed to teach guests how to reach their greatest potential.