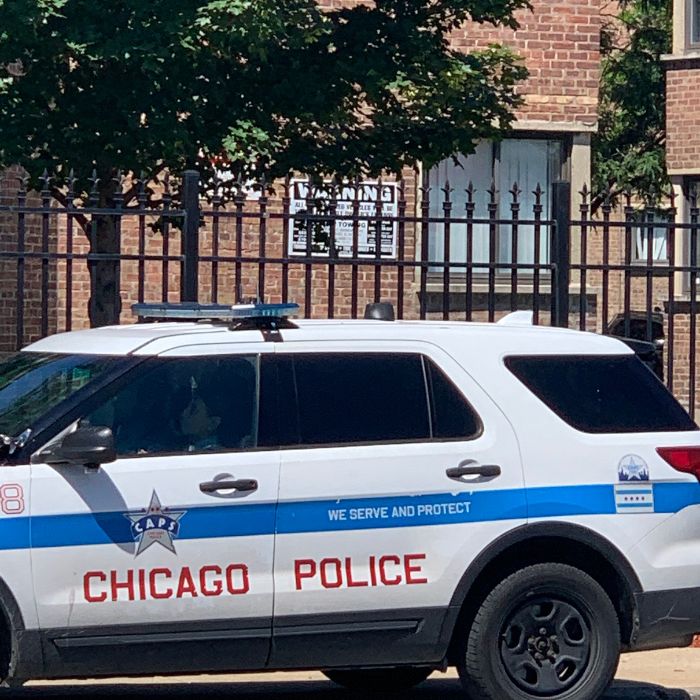 Since 2017, Blacks in Chicago filed complaints against police 10 times more than whites and more than any ethnic group, according to a Crusader analysis of data from the Civilian Office of Police Accountability (COPA).

Data also show that officers who are usually accused of police misconduct are young white and Latino male officers, but Black male and female officers have the least number of accusations, compared to their counterparts.

The data was taken from COPA’s online data dashboard that provides statistics on civilian complaints, allegations and closed cases.

Most of the complaints allege civil rights violations and the use of excessive force.

But when it comes to demographics, Black residents, since 2017, filed more complaints than Latinos and whites combined. 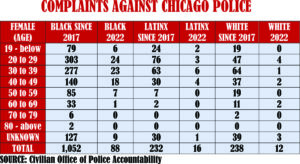 More COPA data also show that so far in 2022, Blacks have filed a total of 365 complaints against police, compared to 69 for Latinos and 27 for whites. Of those 365 complaints by Blacks, 277 were from Black males, compared to 53 from Latino males and 15 from white males. 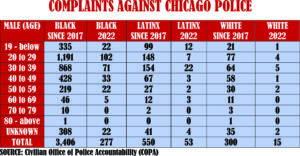 The data from COPA also includes statistics by race and gender on officers accused of misconduct. Since 2017, white officers had 1,215 accusations of police misconduct, compared to 1,134 from Latino officers.

White female officers led their gender counterparts with a total of 1,215 misconduct allegations since 2017. Like their white male counterparts, those with the most misconduct accusations were from age groups 30 to 39 and 40 to 49.

So far this year, white officers have accumulated 210 accusations, compared to 111 for Latino officers and 66 for Black officers. Those figures include male and female officers in each ethnic group.

Since 2017, Black officers have had the least number of accusations involving police conduct compared to their counterparts.