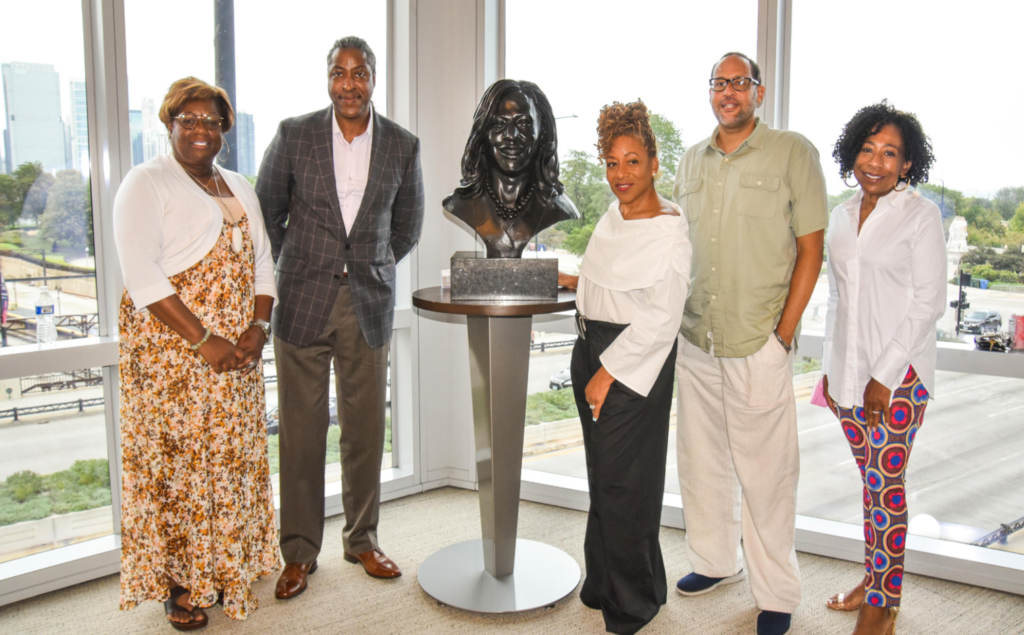 Pigment International hosted a kickoff to October’s Black Fine Art Month during a private salon on September 12 that featured the unveiling of a sculpture by acclaimed artist Gerald Griffin. The attendees got a first glimpse of Griffin‘s, MVP, Madame Vice President, a bronze bust of the country’s first African American and female vice president Kamala Harris, at the home of Pigment International advisor Dr. Patricia Blessman. The theme of Black Fine Art Month 2021 is Missing History – How Black Artists Are Telling the Full Story of American History.

The strikingly rendered bronze weighs 220 pounds and is 35 inches tall on its mounted pedestal. The Vice President has a wide smile and sports a double row of pearls. Griffin studied more than 100 images depicting Harris from every conceivable angle to create the sculpture. The project emanates from Griffin‘s ARTIST LIFE NFP, which has as its goal telling a fuller picture of this country’s history by creating over 500 monuments and other works of art to be displayed nationwide. In addition to the work of Harris, the artist has completed sculptures of Frederick Douglass and the country’s 44th and first Black president Barack H. Obama. Both maquettes are being bronzed.

During a discussion with the audience, Griffin offered the analogy, what if alongside monuments to Thomas Jefferson we also saw the story of Sally Hemings? This completes a story that we’ve long been aware of but don‘t see portrayed via a monument. “I could not wait for someone to validate our vision for the creation of these pieces,” said Griffin speaking for himself and his wife Frantzie. The couple are also the proprietors of The Bourdeau Griffin Design Center, the only full-service interior design center and art gallery on Chicago’s southside.

Artist Paul Branton showcased work in his signature, vibrantly colorful style that blends abstraction and word art with figurative themes. Titled “Change Over Georgian Sky,” the 48”x36” acrylic painting features voting rights advocate Stacey Abrams. Other images and words are juxtaposed in the piece including the American and confederate flags, and the words “vote,” “now” and “free.”

“Pigment International is extremely proud to partner with an artist of Gerald’s immense talent on this project to tell a fuller picture of Black history,” said Pigment founder Patricia Andrews-Keenan. “This year’s Black Fine Art Month can be summed up in a quote by Nigerian novelist Chinua Achebe, ‘until the lions have their own historians, the history of the hunt will always glorify the hunter.’ Our goal is to help artists tell a fuller, richer, truer and more inclusive story of America’s history.”

The reception was held at the end of the week during which the Robert E. Lee statue was taken down from the front of the capitol in Richmond, Virginia. In the background of the unveiling, the audience could see the base where the Columbus monument once stood in Chicago’s Grant Park.

“I am particularly proud to support an organization that realizes the importance of connecting the artistic and the historical,” said Dr. Blessman. “We must make sure that what our children see reflects the true history of our country, warts and all.” She and her husband Steve have noted philanthropists in the city.

Beginning October 1, Pigment will launch a series of programs that further explores these topics. The opening Salon Talk in the DuSable Museum’s Roundhouse will be held in front of the Kara Walker installation, part of Toward Common Cause exhibiton that launched this summer. The event is free to the public and features Griffin, artist Dwight White and Associate Professor Robert Hanserd of Columbia College. The event will be covered by True Star Foundation student reporters.

Pigment International has assembled in-person and virtual programs including national and international speakers for Black Fine Art MonthTM 2021. The Du Sable Museum of African American History, a Smithsonian affiliate, returns as a 2021 partner.