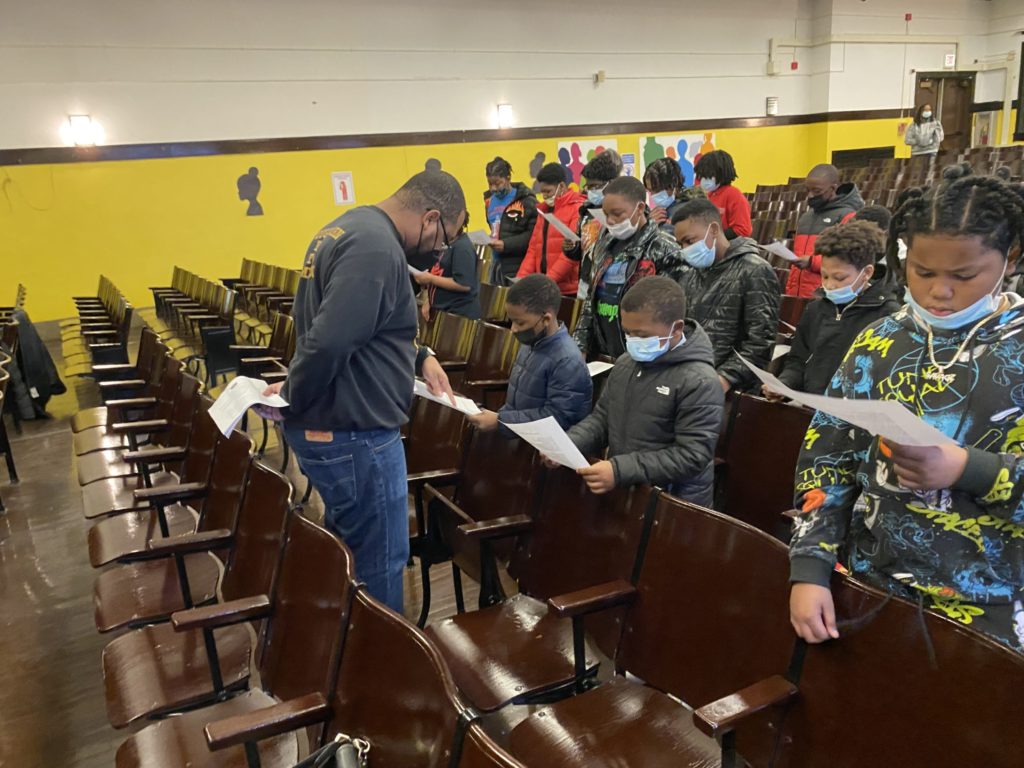 The young men were asked if they knew Don Thompson. Thompson was McDonald’s first Black president and CEO, but no one knew the answer.

Many hands went up when they were asked who Barack Obama was, America’s first Black president.

What about Kwame Raoul? The room fell silent. No one knew the answer that he is Illinois’ first Black Attorney General.

It was a challenging moment for a group of pre-teenagers at Bouchet Elementary Math & Science Academy in South Shore, where the Concerned Christian Men’s program is in its 26th year of mentoring young Black boys through its special program initiatives.

That morning, a new group of boys, many of them Latino, were participating for the first time. They were from Fulton Elementary School near West Englewood.

After weathering a tough pandemic that took the life of its beloved founder, George D. Glenn, the program is rising as it resumes helping young Black men overcome poverty and social barriers to succeed in school and in life.

Helping them is not as easy as it used to be. With funding resources and student participation a challenge, the program faces the tough task of recovering from a pandemic.

It’s a lesson in perseverance for Ernst Lamonte, communication and program director of Concerned Christian Men. He is determined to return the program to a flourishing operation that had as many as 250 participants in its glory days.

Today, the program is down to 40 participants, most of whom are Black boys in elementary and middle schools. During the best of times the program had 12 buses for its youth. Today there are only two. But Lamonte remains optimistic that the program will bounce back after the pandemic.

In the program, students are addressed and treated as young men. They are mentored for five hours once a month by Concerned Christian Men, a non-profit organization of adult Black men who are viewed as role models and father figures.

The program is free, but the young participants are encouraged to give a $5 donation during monthly meetings. Free bus transportation is provided too.

In addition to mentoring participants, staff members provide them breakfast, and take them on field trips throughout the city. Most important, the program prepares the students for the future by equipping them with valuable advice that will help them weather life’s challenges in school and at home.

But for the past two years, the program struggled as it held its mentoring sessions on Zoom. Lamonte said 10 students participated in the virtual meetings, but just two were consistent in attendance.

“It did not turn out well in terms of participation,” Lamonte said. “You’re not feeding people. You’re not giving them a place to play and things of that nature, so we found that those things are draws but we persisted even with two kids.”

The program returned to in-person mentoring sessions in 2021.

On Saturday, March 19, a Crusader journalist was invited to observe the program’s mentoring session at Bouchet Elementary Math and Science Academy in South Shore. It’s the school former first lady Michelle Obama attended when it was Bryn Mawr Elementary.  A colorful mural of Michelle covers a building nearby.

The day began at 9 a.m. in the school’s auditorium.  In addition to Fulton Elementary, the students came from Bouchet Elementary and Jesse White Learning Academy in Hazel Crest.

The day’s leader was George West, a proud product of the program. He was 7 years old when he enrolled in the program, before he graduated from high school and the University of Illinois in Champaign. Today, he works at the firm of Dun & Bradstreet, a company that provides data and analytics for businesses, as a client success manager.

Some weeks West puts in 20 hours a week with Concerned Christian Men in addition to his full-time job.

On this day, West shared how tough his morning was to the point that he almost did not attend that day. West said pressures at home as a husband and as a business professional were getting to him. But he persevered and made it to the program.

About 6’2”, he comes off as a firm but compassionate leader with high expectations for his young participants. He praises them when they behave and with his powerful voice and some clever words gets them to listen when they are distracted.

After the program’s mission statement was read West had a special announcement. The program was bringing back the Oliver F. Hightower Oratory Contest for high school students. The event will be held July 24, but contestants will be perfecting their speeches during three rounds of mandatory rehearsals. The first-place winner will receive $1,000. The second-place winner will earn $500 and $250 will be awarded to the third-place winner.

Another oratory contest is being organized for elementary school students, with details including prize money amounts to be released later.

The Oliver F. Hightower Oratory Contest was renamed after the program’s founder, George Glenn who died from COVID-19 in February 2021.

Lamonte said Glenn had retired four years prior to his death because of an illness. However, Glenn remained an important figure in the program until his death. Glenn founded Concerned Methodist Men in 1996 at Carter Temple C.M.E. Church in Chatham. The name was later changed to Concerned Christian Men.

The program began with helping high school students, but Concerned Christian Men is focusing on middle and elementary schools. They are also focusing on reaching young Latino men.

“But we definitely want to continue going through high schools. His [Glenn] vision was that boys needed mind, body and soul, and they needed to be around other men to help mentor them as well too. Sometimes, boys don’t have any father figures in their lives, not older brothers, not cousins, not even uncles.”

“I grew up in the program before him. He was dynamite,” Lamonte said. “He saw there was a need in the community. He basically gave up working and spent time away from his family so he can commit 100 percent to this. He would be the type of guy who started 9 a.m. in the morning and ended 10 p.m. at night. He just believed very heavily what young men could be.”

After the announcement of the oratory contest, West led the young men in singing James Weldon Johnson’s “Lift Every Voice and Sing.” A prayer followed before a hearty breakfast of eggs, grits, bacon and biscuits was served in the cafeteria.

After breakfast, the participants returned to the auditorium anticipating listening to the day’s keynote speaker. The scheduled speaker was Illinois State Senator Elgie Sims. West informed participants Sims was forced to cancel due to a death in the family. West himself a powerful orator, filled in as the day’s speaker.

West’s 20-minute speech was about finishing a goal.

“As a young man, one thing you must learn is to complete what you started,” West said. “There are lots of people who start things all the time but learning how to finish is one of the most important things that a person can learn to do. If you start it, finish it.

“If you say I’m going to get an A in math this quarter, you make sure you have an A in math at the end of the quarter. What does that mean? If studying by yourself is only going to get you a C or a B, you need to go to your teacher and ask what can I do to get better?

“You have to hold yourself accountable” West emphasized.

West said the organization does not pay speakers. They are vetted before they speak to the participants, however.

“So, like for instance, we wouldn’t necessarily invite someone who’s all about Black Nationalism,” West said. “That’s their thing. Even if the kids say ‘Hey, you want this guy. He’s big on YouTube whatever.

“We would have to vet that person first. Ultimately, what we want to establish is the diversity of opinions, yes. We also want to establish the one single factor that they be pillars in their communities. We want to make sure that we have consistent messaging when they are talking to our young men.”

The last activity of the day was rotations. The young men split into two groups. One remained in the auditorium for a spiritual seminar and the other went to a technology lab, where students played a specially designed Roblox video game that encouraged learning from trivia questions on geography, politics and history. West said the program has a sports rotation, but only when there are facilities available.

Lamonte said the organization has a Pay for A Program for its students.

West said the program has helped him in the long term.

Lamonte said about 30 percent of his students achieve “A’s” in math and science in school.

“As someone who has gone through this program myself, I didn’t understand it myself until I got older,” he said.

“But I still do remember the exposure that I got. And that’s the most important thing for us. It’s like, ‘Remember that guy who came and spoke to us? He ran this type of business.’ But for some students, it’s life changing.”

Another breakfast at Bouchet Elementary will be held April 23.