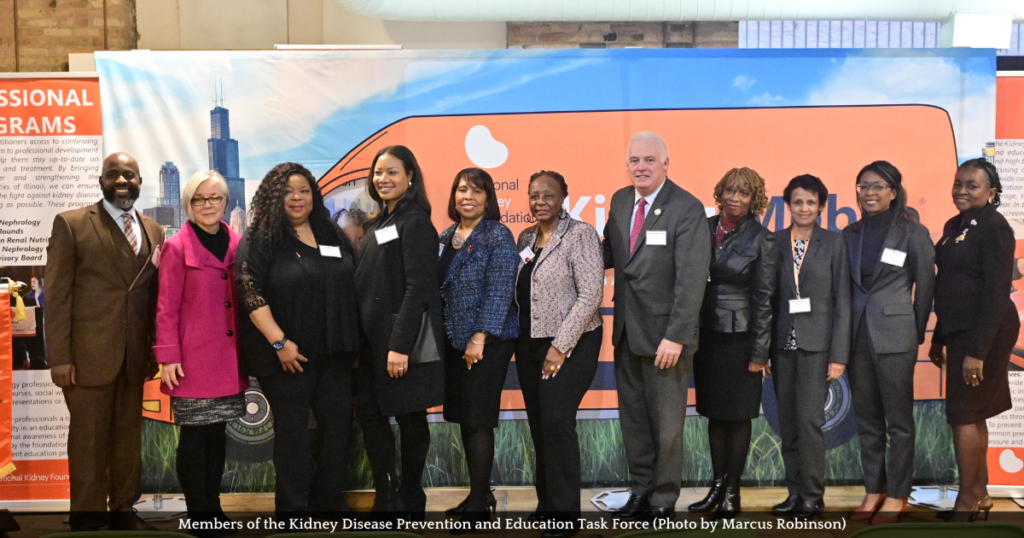 Illinois Senator Mattie Hunter (D-3rd) and her Kidney Disease Prevention and Education Task Force are serious about reducing or eliminating kidney disease and especially educating the public on the benefits of changing what they eat and exercising daily.

Their remarks were made at a press conference held at the National Kidney Foundation of Illinois, 215 W. Illinois.

“If you change your eating habits and exercise daily, you can reduce or eliminate your chances of getting kidney diseases,” said Hunter.

“I have been waiting for this day for a long time.”

Saying she travels across the state a lot, Hunter said, “I began to see dialysis centers pop up everywhere.” It was then she decided to take on this issue of kidney diseases that affects many Black and Brown communities.

“Kidney disease is of the utmost importance here in Illinois. An estimated 1.4 million Illinoisans are affected and only around 177,000 of them are aware of it,” said National Kidney Foundation of Illinois CEO Jacqueline Burgess-Bishop.

“Raised awareness and early detection of chronic kidney disease and its risk factors, including diabetes and hypertension, can help prevent the disease from developing or progressing,” she said.

According to Hunter, kidney disease is the ninth leading cause of death in the United States, with uncontrolled diabetes and high blood pressure the leading causes. Black Americans are four times more likely to develop kidney disease.

“It means the world to me to be co-chair of this task force, as I have been working with the National Kidney Foundation on this issue for a long time,” said Hunter.

“My mother was diagnosed with kidney disease when I was a teenager, and I struggled watching her suffer. I want to work towards prevention and treatment so that no one has to watch their loved ones die from this disease.”

It was under Hunter’s leadership that the senate approved her resolution to create the Kidney Disease Prevention and Education Task Force, created to raise awareness and to reduce the burden of kidney disease throughout the state of Illinois.

The task force was established under Senate Joint Resolution 49, and it works with the National Kidney Foundation of Illinois and other leading educational institutions, to create health education programs, developing increased awareness of the disease and to examine chronic kidney disease, transplants and kidney donations. She works with Secretary of State Jesse White’s office on the organ donation program.

On World Diabetes Day, Hunter said, “Lack of awareness and access to treatment is costing us lives. Far too many Illinoisans are falling victim to a disease that is largely preventable.

“On this World Diabetes Day, we’re taking action to creating a healthier Illinois. This is the first step toward reducing the burden of kidney disease and the racial disparities in kidney health and treatment.”

Hunter focused on eating the proper food as one key way of preventing kidney disease. She said there is enough food grown locally by community groups and farmers to ensure people can receive the education needed to prevent kidney disease which she says affects 37 million Americans.

Citing the National Kidney Foundation, Hunter said 33 percent of adults in the U.S. are at risk of developing kidney disease and that this could be reduced by changing one’s health lifestyle. She urged regular medical check-ups, controlling one’s blood pressure, blood sugar and exercising.