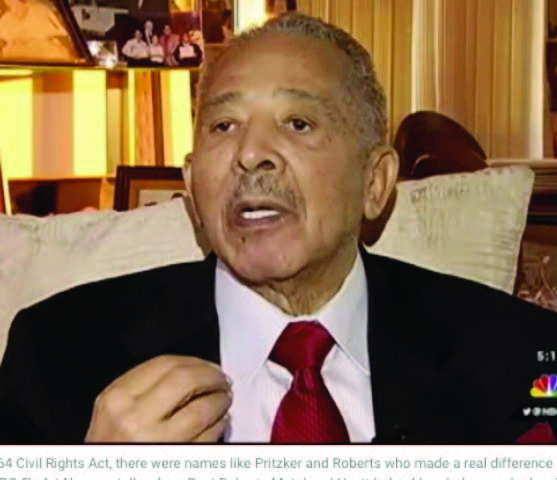 No matter who you talk to about legendary hotel pioneer Herman Roberts who passed at the age of 97 on Sunday, January 31, in Las Vegas, they all say the same thing, he was a “first-class act” who furnished Blacks the dignity of first-rate entertainment and housing.

Born in 1924 in Beggs, Oklahoma, Roberts was the youngest of six children. He had an entrepreneurial spirit that sculpted his legacy as the first Black mega motel/hotel developer in the state of Illinois, if not in the Midwest.

Roberts’ family left Oklahoma when he was 12, moving to Chicago. Coming from humble beginnings Roberts didn’t look back on his life of poverty. Rather, his entrepreneurial spirit drove him to be the best at whatever job opportunities came his way.

In Chicago, he began delivering newspapers, making two cents per paper; then he wiped down cabs and made a dime from each customer.

That wasn’t enough for Roberts who at the age of 15 began driving cabs, then had others drive the cab at night until he had saved enough money to begin buying cab licenses. In 1944 he launched his own transportation business, Roberts Cab Company.

After having been drafted into the military during WW II, Roberts returned to Chicago in 1947 and made history again, putting two-way radios in his cabs. Still, that success was not enough for the young enterprising businessman.

“It was first-class,” said Senator Brookins. “Herman had champion- ship fights there including Sugar Ray Robinson…big time fights right in the center of the motel which was built like a horseshoe. You could sit on the walkway right outside of your room and watch the fights that were in the center of the courtyard,” recalled Brookins. “Herman had Joe Lewis, Muhammad Ali…great fighters. It was something else…truly first-class.”

Starks remembers how during this segregated era Black entertainers could not stay where they sometimes performed; that is not until 1960 when Roberts founded the first Roberts Motel. He began building a string of hotels and motels like the Roberts Show Club, which was once the location of his Roberts Cab Company.

But, unlike downtown entertainment venues where Blacks were not welcomed, Roberts did welcome everyone and opened his doors to whites as well. It was not uncommon to see such white celebrities at the Roberts Show Club as Playboy publisher Hugh Hefner, Chicago Sun-Times columnist Irv Kupcinet or singer Tony Bennett.

A huge number of white socialites would come to see Robert’s Jewel Box Revue where dozens of drag queens would delight the audiences.

When it came to making money, Roberts did not discriminate, and the soft-spoken businessman opened the door for female employment, which also drew more male customers to his establishment. Roberts broke gender barriers in hiring women. “Business is business” was his motto; he would not tolerate any thoughts of discrimination.

While Roberts founded the first Roberts Motel in Chicago in 1960, he built others, including facilities in Gary, Indiana, and in Oklahoma.

In 1970, Roberts built his sixth and most popular motel, the Roberts Motel, which included the famous 500 Room, where Mayor Harold Washington and other politicians often met. It was complete with 250 rooms, 12 suites, two penthouse suites, a restaurant, lounge, ballroom, bar, travel agency, convenience store and beauty parlor.

Agreeing with Tillman is Andrea L. Smith, founder of the Salient Public Relations Company, who says she was stunned over the death of Rob- erts.

“I was deeply saddened today to hear about the passing of another iconic South Side Black business owner, Herman Roberts, who owned the legendary Roberts Lounge and Best Roberts Motel on South King Drive.

“Mr. Herman Roberts was a pioneering Black business owner who helped break racial color barriers in Chicago’s hotel industry, and provided housing for national Black entertainers who had nowhere else to stay in segregated Chicago during the 50s and 60s,” said Smith.

“During its heyday, Robert’s Show Lounge was the social place to be, and he was the South Side Chicago nightlife operator to know. It presented different Black music cultures from jazz, swing, and ballads to pulse-pounding R&B,” recalled Smith.

“A diverse array of big-name Black entertainers and celebrities such as Sammy Davis, Jr., Count Basie, Nat King Cole, Dinah Washington to avant-garde jazz musicians like Sun Ra and others played in his establishment, and then stayed in his once thriving, multi-location Best Roberts Motels because they were not welcome in downtown hotels.

“My father, who worked as a local tenor sax musician ‘sideman’ for various bands saw firsthand the indelible impact Herman Roberts made to advance the cause of racial parity in Chicago.

“So, especially now during Black History Month, it’s more important than ever for us to give him his due respect. Far too often, our stories of drive, determination and success, and the accomplishments of these Black civic, business, and social leaders, have been left out of the history books,” Smith stated.

“Yes, he stands tall in Chicago,” said Dorothy R. Leavell, whose Crusader office is just two blocks from where Roberts Show Lounge operated. She noted he made a significant contribution during Jim Crow and the Civil Rights Movement, providing Blacks shelter and entertainment options at important times in American history.

“But those were the days!” she added. “It was a revolving door of famous names, both the entertainers and the guests. ‘Roberts’ was the place to see and be seen. Herman Roberts stands tall in Chicago business and in the Black community. Chicagoans in the Baby Boomer generation know his name. They either frequented Roberts or worked there, or passed one of his places every day.”

Herman Roberts, an African-American icon who kept giving his community the best in entertainment and housing, will always be remembered, Starks said.

Because of the pandemic’s travel and quarantine restrictions, Roberts’ interment will be held in Las Vegas where he died. He will be honored with another celebration of life in Chicago at a later date, according to his wife, Sonja.