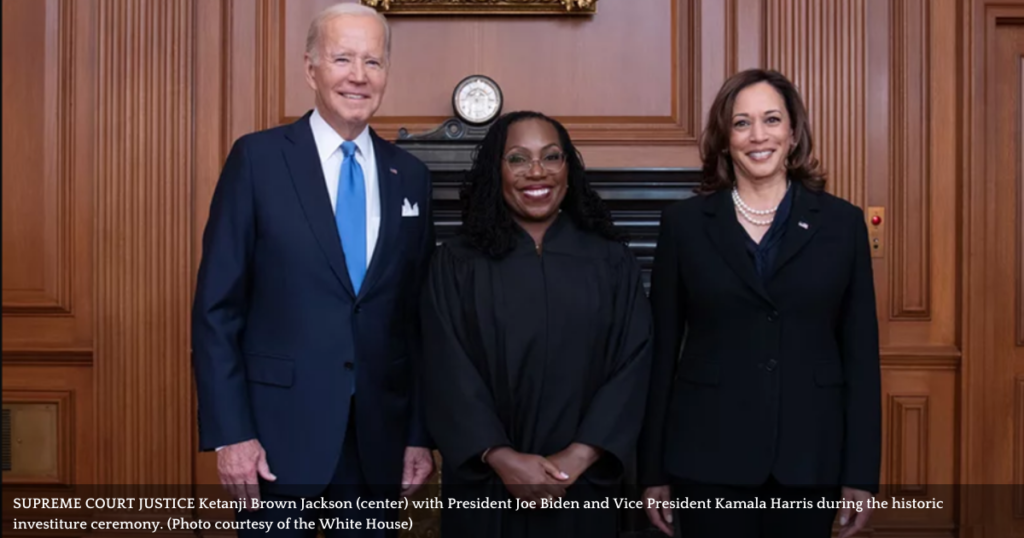 After her historic appointment earlier this year, Supreme Court Justice Ketanji Brown Jackson this week started her trailblazing career as the first Black woman to serve on the nation’s highest court.

In her black robe, Jackson took the seat on the far end of the bench, in keeping with the High Court’s traditional seating, based on seniority.

On her first day as Supreme Court Justice, Jackson was vocal with her opinions as the court reviewed the first legal case of the fall session. The case concerned a major environmental dispute over the federal government’s reach in protecting the nation’s waterways under the Clean Water Act.

Jackson, along with the other Justices, posed questions to the lawyers who argued the dispute between the Environmental Protection Agency and Idaho landowners.

The landowners want the court to limit the government’s authority over wetlands to encompass only those with a visible surface connection to U.S. waters.

During her questioning, Jackson said, “You say the question is which wetlands are covered, which I agree with,” she told a lawyer for the property owners. “But I guess my question is, why would Congress draw the coverage line between abutting wetlands and neighboring wetlands when the objective of the statute is to ensure the chemical, physical and biological integrity of the nation’s waters?”

Later, Jackson politely apologized for asking a follow-up question after a lengthy back-and-forth conversation with a lawyer for Idaho landowners Chantell and Mike Sackett, who want to build on a property the government has deemed to be a wetland.

Jackson’s line of questioning was like the court’s two other liberal Justices, Elena Kagan and Sonia Sotomayor.

A former public defender who served as judge in two federal courts in Washington, D.C., Jackson was appointed by President Joe Biden before she was sworn in during a historic ceremony June 30.

She fills the seat vacated by Justice Stephen Breyer, for whom she once clerked as a Harvard Law School graduate.

On September 30, Jackson participated in her investiture ceremony that was attended by President Biden and Vice President Kamala Harris.

The event was largely ceremonial, but Jackson’s historic role gave the investiture special significance. Members of the press were not allowed to record video or audio, but photographs of the event were provided by the court.

U.S. Attorney General Merrick Garland, who was nominated to the Supreme Court in 2016 by President Barack Obama before Senate Republicans refused to hold his confirmation hearings, was also present and played a role in Jackson’s investiture ceremony.

During the ceremony, Jackson sat in front of the bench in a chair that had been used by Chief Justice John Marshall.

Jackson promised to “administer justice without respect to persons and do equal right to the poor and to the rich.”

Roberts and Jackson then walked down the front steps of the courthouse, chatting out of earshot as photographers captured the scene. Her husband, Dr. Patrick G. Jackson, joined them at the base of the steps of the Supreme Court Building.

During his presidential campaign, President Biden promised to nominate a qualified Black woman to the Supreme Court, which had not had one in its 232-year history.