The National Center for Missing & Exploited Children is asking for the public’s help to find a missing 9-year-old boy seven years after he disappeared.

King Walker was only 2 years old when he vanished from his home in Gary, Indiana on July 25, 2015. King may be in the company of his aunt, Diamond Bynum, who is also reported missing. Both King and Diamond were last seen leaving a family home in the area. The two never returned and haven’t been seen since.

In 2021, forensic artists with the National Center for Missing and Exploited Children created an age progression image of what King may look like at age 8. When he was last seen, his hair was in dreadlocks.

On Monday, July 25, King’s grandmother, LaShann Walker, will hold a prayer vigil in honor of King and Diamond’s disappearance date. The prayer vigil is scheduled for 2PM CT at 401 Broadway in front of Gary Indiana City Hall.

Questions and press inquiries can be directed to King’s grandmother and Diamond’s mother, LaShann Walker, at 773-934-2295.

Anyone with information on King, Diamond, or their whereabouts is asked to call the Gary Police Department at 1-219-881-1214 or the National Center for Missing & Exploited Children at 1-800-THE-LOST. 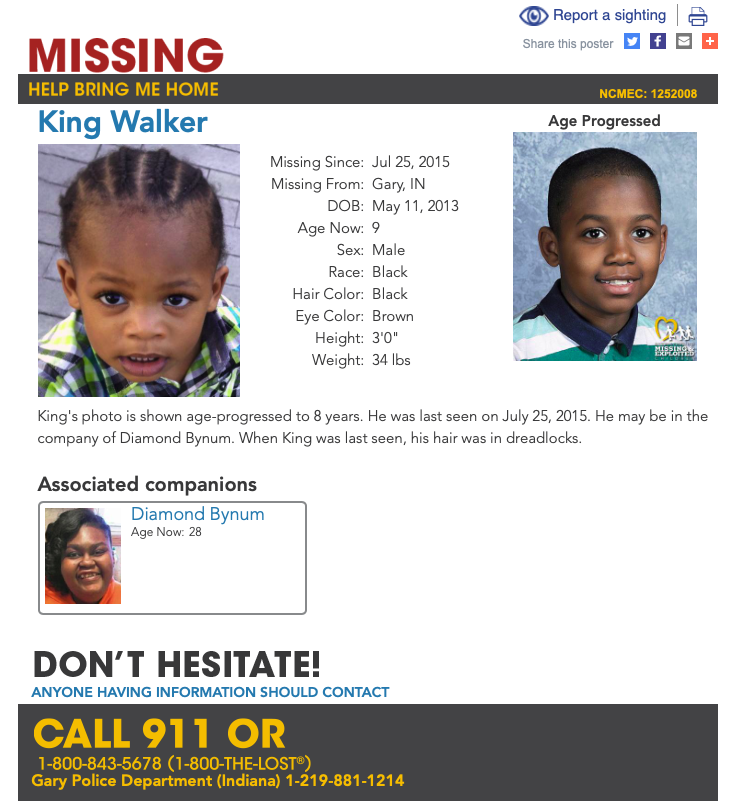