Here’s how GOP senators are reacting after losing in Georgia 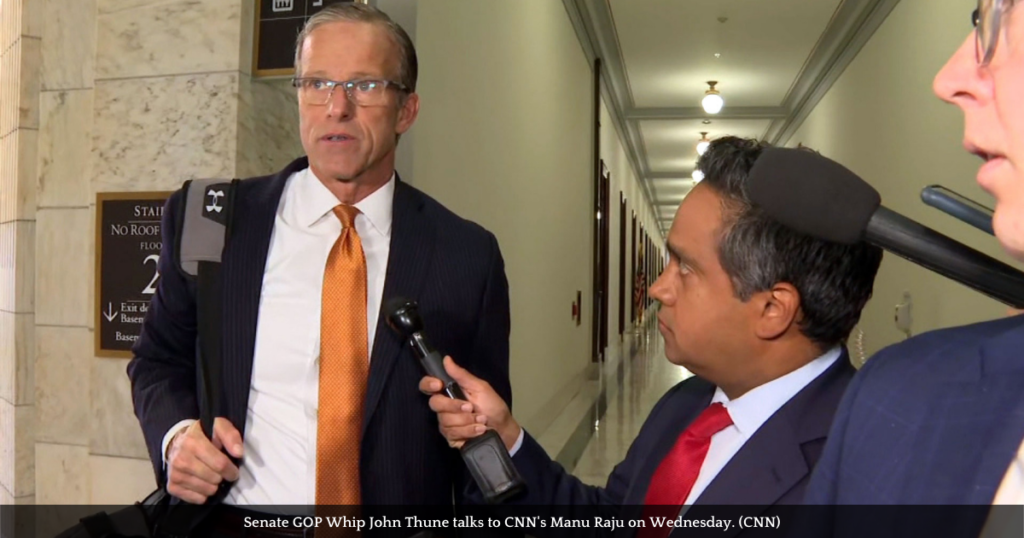 GOP senators were noticeably upset about their 2022 problems in the aftermath of their loss in the Georgia Senate runoff, calling for better candidates and contending that former President Donald Trump caused a problem on the trail.

Here’s how some Republicans are reacting after last night:

Senate GOP Whip John Thune said Trump’s presence on the campaign trail created a contrast when they party wanted to keep the race focused on President Joe Biden and his policies.

“It all starts with quality candidates – there’s no substitute for that – and then it’s resources, and get-out-the-vote operation, messages; there are a lot of factors that go into a successful campaign and clearly we had some places this year we came up short and we need to fix that,” Thune said.

Asked if Trump was a problem for their party, Thune indicated he was.

“Well, he was of course very active in the primaries and even in the general election because he was a presence out there and in an election year where it should have been a referendum on the current admin and their policies. The Dems were in many cases able to turn it into a choice election because of Trump’s presence out there — so was he a factor? I don’t think there’s any question about that,” he said.

Thune added that candidates shouldn’t have campaigned on the bogus notion the election was stolen.

“A lot of the candidates who had problems in these elections were running on the 2020 election being stolen, and I don’t think independent voters were having it,” he said.

Sen. Roger Wicker of Mississippi said, “We didn’t get our vote out for sure.”

“That has to change because we need to bank votes like they do. So there’s a lot to learn,” Graham said.

Graham also said that Trump has to prove he can win if he’s to clinch the nomination for 2024.

“He’s still very popular in the party. People appreciate his presidency. They appreciate his fighting spirit. But there’s beginning to be a sense, ‘can he win?’ So his number-one job, I think, in these early primary states is to put together a team — a winning team — and convince people that he can close the deal in the general election. He’s still the odds-on favorite, because there’s a lot of goodwill in the Republican Party about Trump, but the question is about winning, we want to win. Time will tell,” he said.

Sen. Rick Scott defends decision to stay out of primaries and says GOP needs to improve its “national message”

Sen. Rick Scott, the National Republican Senatorial Committee chair, told CNN that the election losses were “frustrating” and said the GOP needs to do a better job of explaining their message. He said they need to have a “good national message” as he pushed a national agenda that Senate GOP Leader Mitch McConnell resisted. He said Republicans also need to improve their performance on early voting.

He defended the committee’s decision not to intervene in primaries. And even as other Republicans have been critical about their candidate quality, Scott said their candidates were “good, quality people.”

Asked if they should have engaged in primaries when the NRSC stayed out of it, he said they shouldn’t.

“Well, I think we’ve got to rely on the voters in the states,” Scott said. “It’s their states. I trust the voters.”

Scott also steered clear of criticism of Trump and said this when asked if candidates should avoid claiming the election was stolen. “When I talked to voters, and I didn’t run this time but it’s good getting out there to talk to people. What they wanted to know is their votes never gonna be diluted.”