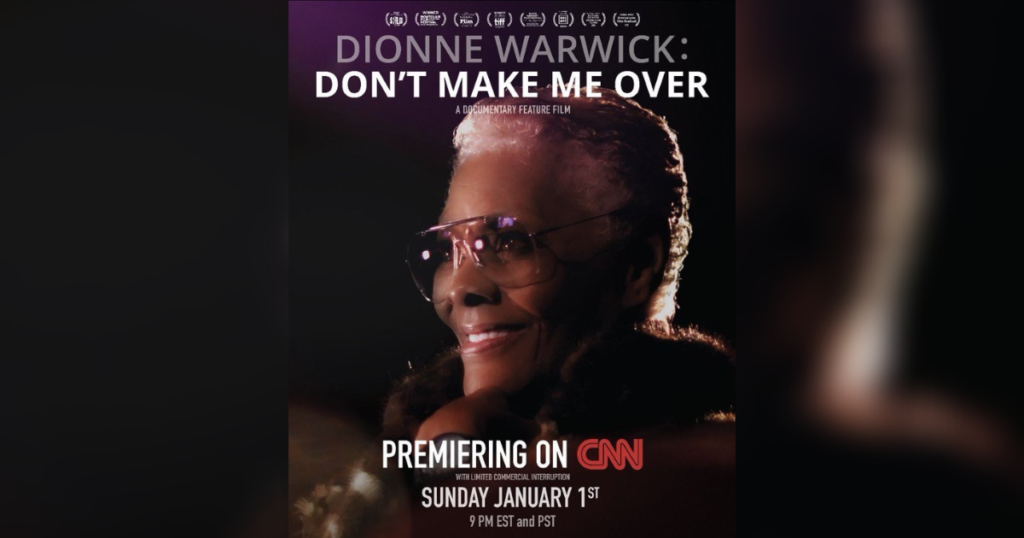 The long-awaited award-winning documentary chronicling the life and career of music legend Dionne Warwick will finally make its way to television. “Dionne Warwick: Don’t Make Me Over” airs on New Year’s Day.

The documentary was five years in the making, according to filmmaker Dave Wooley, who wrote and solely produced the documentary. Wooley also directed the film alongside veteran David Heilbroner (of “Say Her Name: The Life & Death of Sandra Bland”).

Wooley, who also co-authored Ms. Warwick’s autobiography, “My Life as I See It,” wants viewers to realize there’s more to the singing icon than the several classic hits she enjoyed (“Walk On By,” “I Say A Little Prayer,” “Do You Know The Way To San Jose,” “Then Came You,” “That’s What Friends Are For”). “I want folks to learn about Ms. Warwick’s legacy and as a transformational leader,” explains Wooley.“

“We focus on her work and commitment to Civil Rights in the 1960s and how she stood up and stared down at Jim Crow racism. Then we move on into the 1980s with the AIDS epidemic and her ambassadorship on the U.S. commission to address this matter, which led to Ms. Warwick to prompt then-President Ronald Reagan to speak directly on the issue.”

Wooley explains how the icon reacted when seeing the film. “Upon viewing, Ms. Warwick said to me, ‘Dave, you put your foot in that (film).’ That meant so much to me because I put my entire being into making the doc. It’s indeed an honor.”

Warwick has been parodied on Saturday Night Live and has a Twitter following of more than 610,000 accounts. She has an engaging social media presence, where she chats about Stevie Wonder, Diahann Carroll and social issues.

She posted the photo in the white gown in October, and it has received more than 25,000 likes.

jonathanj1970 responded when seeing Warwick’s message: “But you still say a little prayer before anything else, right? The moment you wake up? Before you put on your makeup?”

JTChestnut posted this message and used a title that has been given to many mature female icons: “I loved this photo! It was from the ‘Dionne Warwick Sings Cole Porter’ album. I remember seeing you perform ‘Night and Day’ on the Soul Train Music Awards. Thanks for the lovely memory, Auntie!”

And lastly, JEMNutrition said: “Hi Dionne, Thank you so much for coming to the Des Plaines Theatre. You look & sounded great with an excellent band. It was very special hearing you sing ‘I Say A Little Prayer.’ What a wonderful evening. Until next time.”

Don’t forget to tune into CNN on January 1 at 8 p.m. CST to sing along and delve deeper into “Auntie Dionne.”\