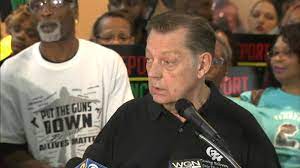 Chicago Cardinal Blase Cupich sent a letter to the St. Sabina parish Tuesday informing them Father Michael Pfleger will be stepping away from his ministry after being accused of sexually abusing a child.

In the letter, Cupich said the Archdiocese of Chicago’s Office for Child Abuse Investigations and Review received an allegation of sexual abuse of a child that happened more than 40 years ago.

Cupich said Pfleger agreed to step aside from his ministry and will live away from the parish during the investigation. Father Thulani Magwaza will temporarily serve as administrator of St. Sabina parish, and will attend to the church and the school.

Cupich said the allegation has not been proven true or false, so there should be no presumption of guilt or innocence.

St. Sabina responded in a statement, saying in part, “We, the Cabinet of the Faith Community of St. Sabina, believe that these accusations are unfounded and we boldly stand behind the integrity, passion, work and ministry of our Sr. Pastor, Rev. Michael Pfleger…We understand there is a process and protocol of the Archdiocese of Chicago and we will fully cooperate. However, we believe that our Sr. Pastor will be fully exonerated from all accusations and we will standing with him during this process as he has stood with victims of injustice and will continue to uplift his work and the life, [sic] he has committed to serving others.”

CLICK HERE to read the full statement from St. Sabina

Pfleger, 71, became a priest in the Chicago Archdiocese in 1975 and pastor of St. Sabina in 1981. For decades he’s been one of the city’s most outspoken and politically active faith leaders. Last Thursday he led an anti-violence march.

The allegation was also reported to the Illinois Department of Children and Family Services and Cook County State’s Attorney, as is policy, Cupich’s letter said.

“It is crucial that you know nothing is more important than the welfare of the children entrusted to our care,” the letter concluded in part.

Archdiocese of Chicago officials said they became aware of the allegations Monday afternoon. They are not aware of any lawsuit associated with the allegations. They declined to give further details beyond the letter.

No further comment from the archdiocese has been made or will be given Tuesday. Father Pfleger has not responded to requests for comment from ABC7 Eyewitness News.