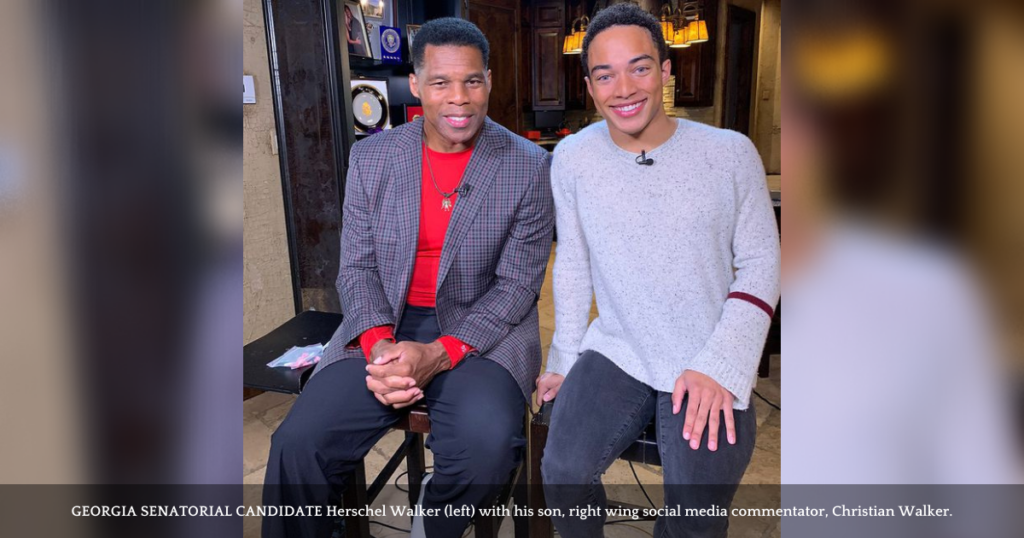 Herschel Walker – the former football player running for the U.S. Senate from Georgia – says he opposes all abortion; even when rape, incest or the life of the expectant mother is involved. Yet, the Daily Beast reports that he paid for his girlfriend to have an abortion in 2009, and she still has receipts to prove it.

Walker’s eldest son is blasting his father for purporting to be a family man when he neglected his children, birthed children outside of wedlock and reportedly put a gun to his wife’s head, threatening to blow her brains out. Papa Walker’s response: that was then… this is now.

In unrelated news, the former President – who of course endorses Walker – railed against GOP Senator Mitch McConnell for supporting bi-partisan legislation, saying the Republican leader of the Senate apparently has “a death wish.” Also, 45 threw in a racial slur against McConnell’s Asian wife.

Contrary to popular belief, there are NOT always two sides to every story. While everyone is entitled to their own opinion, people don’t have a right to deny conspicuous truths. There are no such things as alternative facts.

If you are out on your morning trail walking or jogging and happen to encounter a fox sneaking up behind an unsuspecting preschooler, there is nothing that morally compels you to first get the fox’s side of the story before taking action. Right is right.

Something has dulled the senses and sensibilities of what once seemed to be clear-thinking America about matters that should not even be up to debate. While one man inappropriately bolstered to the position of the Oval Office certainly was “Enabler-in-Chief” for the most disparate mentalities in recent memory, he did not singularly cause this despicable phenomenon.

The mentality of those who propagated his ascent are more than complicit, they are at the root of his rise. While they were in large part historically proponents of an America that rejected inclusion and feverishly fought equity, most of their strategizing and implementations of evil were more covert and disguised in the cloak of twisted religious values and nationalism.

With the advent of the so-called “Tea Party,” a group you rarely hear mention of these days, there was a thinly veiled opposition to the election of President Barack Obama that perpetuated division, bolstered bigoty and screamed out loud what racists had customarily reserved for whispers in conversations among like-minded people. Suddenly, they have snatched off the hoods.

Inappropriate off-the-cuff remarks caught on camera or recordings that once ended public careers have been diminished to anything from quickly forgotten gaffes to virtual badges of honor among the rebellious contingencies objecting to change. Racists speak without impunity.

Presidential candidates and running mates who in the past were dumped for plagiarism or infidelity pale in comparison to the allowable portions of moral contempt today.

Some will say bigotry and injustice merely reflect business as usual in the U.S. – that the more things change, the more they stay the same.

Many will submit that a nation that enslaved millions of human beings for centuries before continuously subjugating that oppressed population to second-class citizens never could rightfully claim moral high ground; that a nation that only allowed females to vote 150 years after boasting a Declaration of Independence and still mutes their voice was disingenuous from the start when it comes to character.

But just because things have always been troublesome doesn’t mean that they are not getting worse. These are not mutually exclusive realities. Bad to worse is a real thing. So, besides the usual suspects alluded to earlier in our government, where are other co-conspirators who play subtle or overt roles in the pervasive implosion of civility, values and humanity today?

We can start with the cowardice of the performing and visual arts. Where are the bold statements of righteous indignation regarding man’s inhumanity to man on screen and stage? More commercially safe political middle road is the preference.

We can point to silence from the pulpit. The so-called evangelicals have turned the word of God upside down and inside out. More moderate men and women of God who denounce them do so timidly rather than in full-throated objection.

We certainly most include the miseducation within our schools. Even before the fake arguments about so-called critical race theory, schools were doing too little addressing the needs of too few. Some of the most visible outrage has historically been on the college campuses of America. That is seldom apparent at this point these days.

And finally, we most undoubtedly pinpoint the culprit ability of news media. And it is not just FOX and News Nation and conservatives whose agenda is never camouflaged. Too little is being said or done even among media traditionally identified as liberal.

Rather than constantly report on “the big lie,” why not make a commitment to truth and simply stop giving airtime and print space to extremists and their hateful platforms used to express their vapid views. First amendment violation? Don’t make me laugh. Editorial decisions are made every day.

Leaving it to less-informed viewers to “make up their own minds” is a dereliction of duty. News should be held to a higher standard and commentary sharply reduced and supported by fact. To pretend to open mics to maniacs is in the interest of fairness is ludicrous.

We have our challenges but giving up on the system is not an option. With all the issues that we are forced to confront, we must be steadfast in pointing them out and urging people of good will to remain steadfast in their unrelenting pursuit of change.

Call it like you see it, no matter where the fault lies. But never give up or give in. This is a marathon – not a sprint. Never quit.