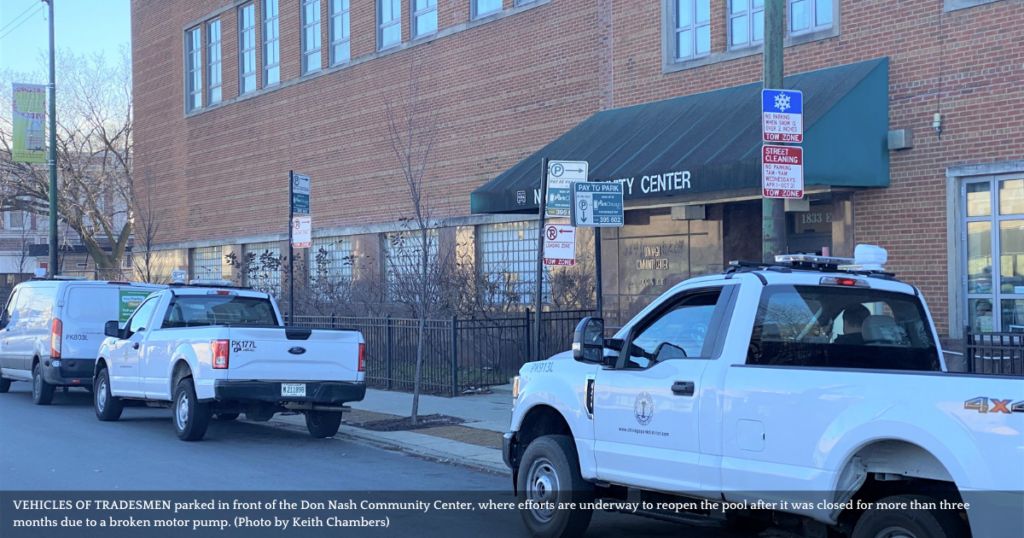 The popular indoor swimming pool at Don Nash Community Center in South Shore stayed closed for more than three months, despite an emergency purchase order, according to documents the Crusader obtained under the Freedom of Information Act (FOIA).

The Park District released eight documents in response to the Crusader’s FOIA request, but none account for the more than 90 days the pool was closed after the motor pump broke on August 14. But some show that the purchase of a new one was an emergency order that was expedited after the Crusader began inquiring about the closure of the Don Nash pool.

About 40 aquatic classes have been canceled since the pool was closed in August after the motor pump broke. The Crusader two weeks ago reported that despite repeated inquiries from members and patrons of the facility, the Chicago Park District remained silent on the status of the pool at the center. Since the Crusader’s first story, workers had been working to replace the motor pump to get the pool back up and running again.

But on November 17, the Park District responded to the Crusader’s FOIA request and released a document that is a purchase order for a new motor pump for $9,356 that was sold by Illinois Process Equipment from Lisle, Illinois. Dated August 16, 2022, the order was placed by Jerry Wilson who, according to public records, is a machinist foreman for the Chicago Park District.

In the box under description, a note reads, “DON NASH-EMERGENCY POOL FILTER PUMP-CANNOT MAINTAIN OR OPEN POOL.” The same message is also repeated outside and under the description in a special note to Illinois Process Equipment.

The Park District also released a purchase quote handwritten document from Wilson that says, “For Nash Pk Pool,” with the word, “RUSH” underneath.

At the bottom of that document, Wilson writes,

That document is signed by Wilson and another individual whose name is redacted or blacked out.

But that document is dated August 4, which is 10 days before the motor pump broke. That document and a separate price quote from Illinois Process Equipment on July 25 suggest that Park District officials were aware of the aging part and were in the process of replacing it.

But questions remain why an emergency purchase order for the popular pool took more than three months before action was taken amid inquiries by the Crusader. No follow-up emails or other documents were provided by the Park District in response to unanswered questions. The only document that was dated during the pool’s three-month closure was a requisition form that shows the approval of the purchase of the motor pump from Illinois Process Equipment. That document also shows an emergency request that says Don Nash Pool cannot reopen without the new pump.

As of Tuesday, November 29, the Olympic-sized pool remained closed. However, the new pump motor had been installed and the pool was filled with fresh water. But workers were still heating the water, and several sources told the Crusader that the pool was expected to reopen.

For decades the pool had been popular among all age groups. Lap swimmers used the facility early in the morning, and seniors take numerous water exercise classes there. When it closed, many patrons in South Shore had few options to fill the void. Many told the Crusader they failed to get any answers on the pool’s status when they asked the facility’s supervisor or the Park District. More than 60 years old, the facility is in dire need of renovation. The men’s locker room is outdated, and sources told the Crusader the women’s locker room has similar conditions.

Before it was the Don Nash Community Center, the facility was the old South Shore YMCA that was built in the 1940s. The Chicago Metropolitan YMCA closed the facility after it opened the $10 million South Side YMCA at 63rd and Stony Island in 1990. In 1991, the Park District purchased the facility and renamed it after Don Nash, a beloved community activist and a Coca Cola company executive.