Construction of the Double Track NWI Project to begin

The Northern Indiana Commuter Transportation District (NICTD) is pleased to announce that it has issued Notice to Proceed to Walsh/Herzog Joint Venture for construction of the Double Track Northwest Indiana (DT-NWI) Project. The Notice to Proceed marks the beginning of work to construct a second track, which will eliminate train interference on the existing South Shore Line single track. The DT-NWI Project will ultimately result in reduced travel time, more frequent train service, and expanded connectivity between northwest Indiana and Chicago.

The $649 million dollar project has been divided into six contracts to construct the second track and station improvements at five South Shore Line stations.

The public should expect to see construction mobilization in February and track construction activity between Michigan City and Gary-Miller beginning in March 2022. In order to accommodate the construction, South Shore Line passengers will be bused between various stations throughout the Double Track project. The first segment of busing is tentatively scheduled to begin on February 28, 2022 for all passengers traveling between Dune Park and Carroll Avenue stations. Buses will provide service at the Beverly Shores and Michigan City 11th Street stations. Additional details including bus stop locations and specific dates will be released in the coming weeks.

Track construction activity between Ogden Dunes and Gary will begin in March 2023. All elements of the DT-NWI Project are anticipated to be fully complete and open for service in 2024.

“We are thrilled that construction is now underway for the South Shore Line’s Double Track Northwest Indiana Project,” said Michael Noland, NICTD President and CEO. “We owe our gratitude to individuals and organizations locally, regionally, and at the state and federal levels for helping advance the project to this phase,” he added.

“The project team is enthusiastic about the work ahead, knowing just how important this project is to both the railroad and Northwest Indiana,” said Nicole Barker, DT-NWI Project Manager. “We look forward to working with communities over the next two years of construction,” she added. 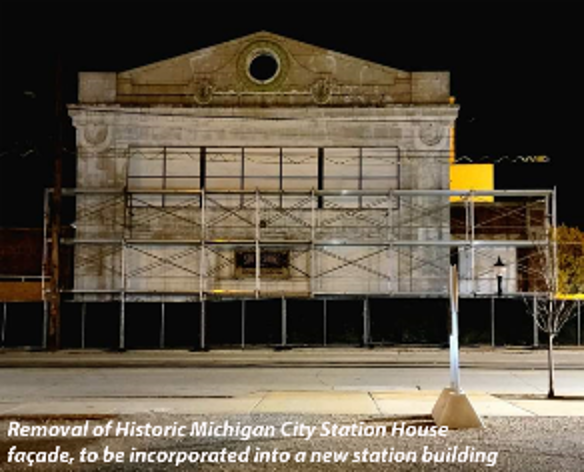