Letter to the Editor: Rev. Jackson deserves a huge honor 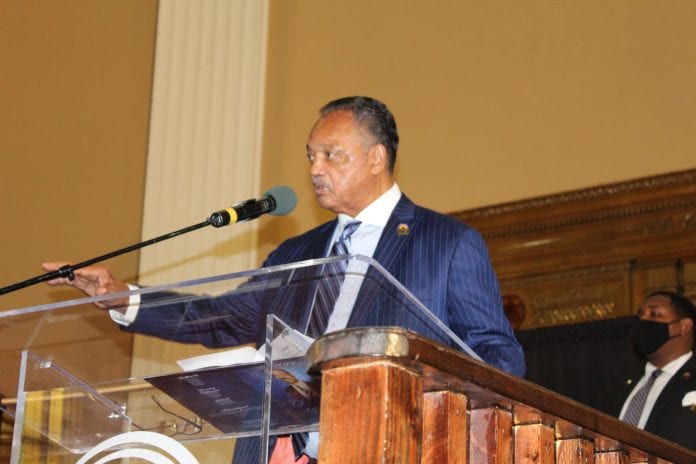 I pray that by the time this letter is published (if it is published), that Chicago and the world have received news that the Reverend Jesse Jackson and his wife are responding favorably to their treatments for the COVID-19 virus. The news that they both tested positive for COVID was shocking and unsettling. For those who came of age in the ’60s, like me, Reverend Jackson has been a staple of our lives.

We have seen him champion several civil rights causes, break political ground, and become a one-man international force. I am among those who believe there would have been no President Barack Obama were it not for Reverend Jackson’s two preceding runs for President.

Yes, we also have seen him vilified any number of times. Personally, the most salient aspect of Reverend Jackson’s character is his resilience and perseverance. To some he is a hero, others a leader, and many a spokesman. Most recently, with the deaths of other lieutenants of Dr. Martin Luther King, Jr., Reverend Jackson could easily be considered an elder spokesman for civil rights.

If we are honest with ourselves, we will admit that the residual effects of COVID- 19 mean Reverend Jackson, once healed, will possibly be a different person. I have talked to friends and family members of COVID survivors. The consensus is even after the hospital stay, the victims have difficulty with speech or memory.

We have witnessed Reverend Jackson’s somewhat impaired speech since his diagnosis of Parkinson’s disease a few years back. Undoubtedly, that is one of the things that will be adversely impacted by the COVID-19 virus.

Whether Reverend Jackson is capable of returning to lead the organization he founded, Operation PUSH, remains a mystery. The aforementioned resilience may allow him to fool us and he might go back to the helm of PUSH.

Regardless of his “work” future, I firmly believe it is time to honor Reverend Jackson for the decades of tireless work he has done. Renaming a street, or applying his name to a building, or anything similar, in my opinion, is insufficient.

I would like to see us all—regardless of ethnicity, age, or political persuasion—band together to rename Midway Airport, Reverend Jesse Jackson Airport. Changing the air- port’s name will signal the significance of Reverend Jackson’s contributions to not only Chicago, but the world.

No doubt, some, probably many, will see this suggestion as “over-the-top.” Really, though, when it comes to honoring Reverend Jackson, I don’t believe there is any such thing. There is a common saying around the country that we should “give them their roses while they can smell them.” This is a prime example of that adage. Regardless of how Reverend Jackson emerges from this virus, he deserves a huge honor, one that he can enjoy right away.

Finally, there is nothing sacred about the Midway name. In nearly 100 years, the name has been changed three, maybe four times. I can’t help but wonder if someone randomly asked 100 Chicagoans or Midwesterners why the airport is named Midway that even 25 would know.

Yes, the idea is a contentious one, but it signifies the fights that Reverend Jackson took on and won.