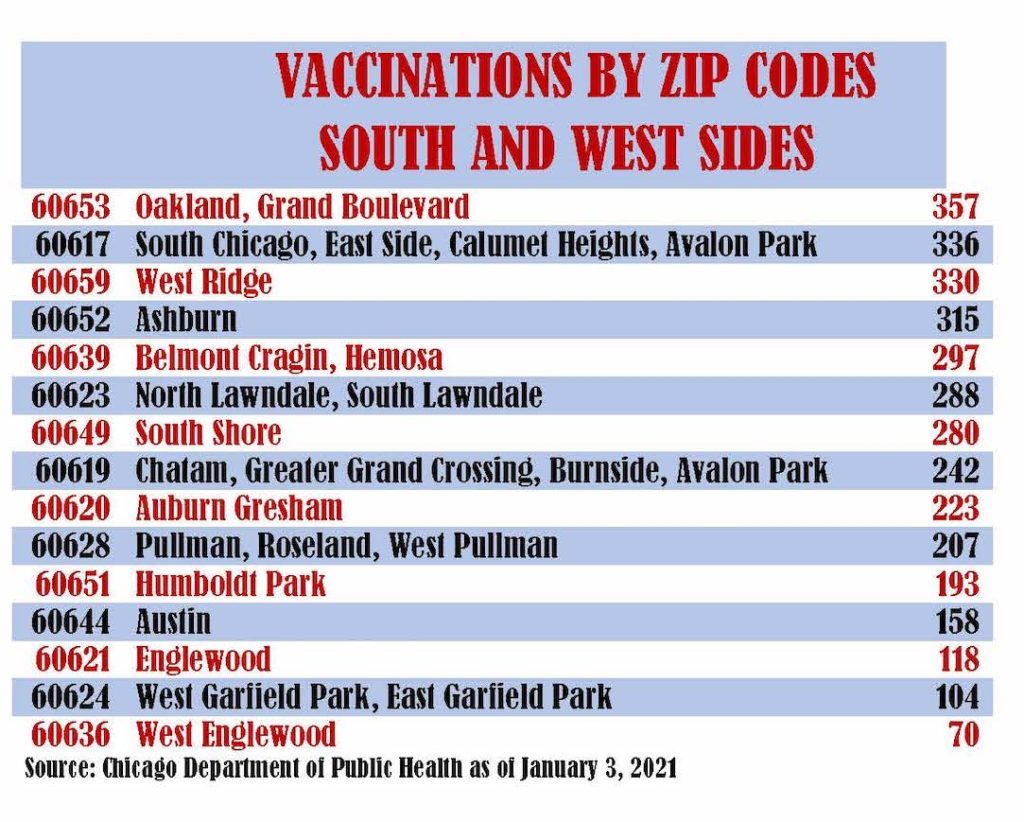 Those details are the findings of an extensive Crusader analysis of data on vaccinations that occurred January 3 in zip codes of Chicago’s 77 neighborhoods. The data reveal that affluent neighborhoods on the North Side are getting more vaccinations at a dramatically higher rate than any of Chicago’s neigborhoods despite having less cases and COVID-19 deaths than some of them, including the South Side.

Nearly three weeks after the first person in Chicago received the first shot of Pfizer’s vaccine at Loretto Hospital on the West Side, hospitals throughout the city are busy inoculating first responders to protect them from the stubborn coronavirus that has infected tens of thousands and killed nearly 4,000 residents.

As ordinary residents wait to receive the first dose of the vaccine, a gap of the number of vaccinations is already widening between Chicago’s affluent and low-income neighborhoods, the Crusader has determined.

As of January 3, 30,905 residents received vaccinations at hospitals throughout Chicago.

On that date, there were 11 zip codes where there were over 1,000 vaccinations. Only one was on the South Side and none were located on the West Side. Six of the zip codes were on the North Side and one, 60611, includes Chicago’s Gold Coast.

Out of 13 zip codes on the North Side, six zip codes had over 1,000 vaccinations as of January 3, city data show. They include the neighborhoods of  Rogers Park, Lakeview, Irving Park, Uptown, Lincoln Park and Logan Square. The zip code with the highest number of vaccinations was West Town on the Near West Side with 1,804 inoculations.

Unlike the North and Near North Sides, there were no zip codes on the West Side that had over 1,000 vaccinations as of January 3.

The West Side zip code with the highest number of vaccinations is 60608. The predominately white and Latino neighborhood had 838 vaccinations.

The gap can be attributed to the fact that the vaccinations include only first responders in the first phase of the Pfizer rollout.

They work at some of the largest hospitals in Chicago, which are not located in zip codes that include Black neighborhoods or low-income communities.

For this story, the Crusader reached out to Dr. Allison Arwady, Commissioner for the Chicago Department of Public Health, who did not respond by press time for the print edition.

The gap may widen as concerns persist about Blacks being reluctant to take the vaccine because of their longstanding distrust of the healthcare industry.

Vaccinations began in December at Loretto Hospital on the West Side, where the COVID-19 death rate is more than 60 percent higher than the citywide average.

Medical workers at Chicago’s 34 hospitals and nursing homes were the first to be inoculated. Ordinary Chicago residents are expected to receive vaccinations in the spring.