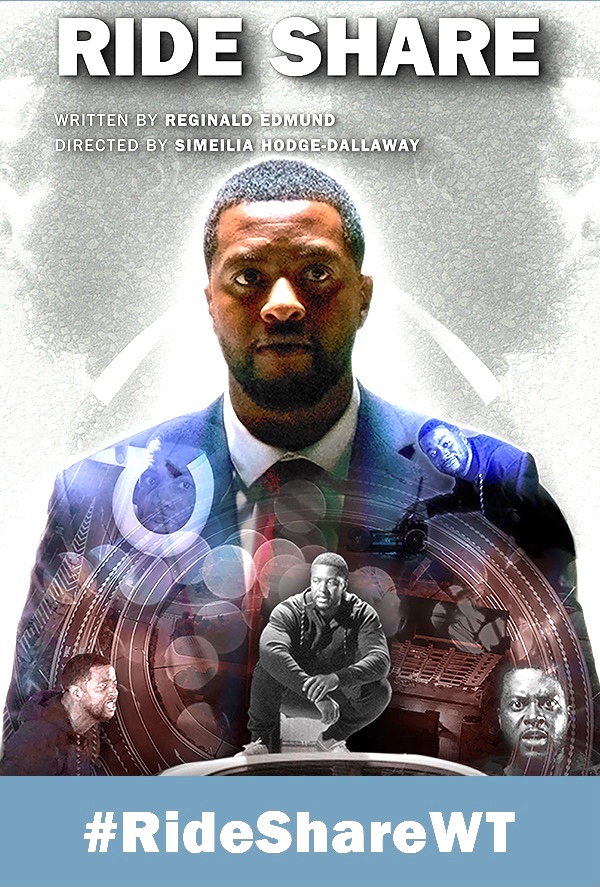 Marcus has a new wife, a comfortable job and everything seems to be falling into place – until his honeymoon is interrupted by an email from work, laying him off. To make ends meet, he becomes a ride share driver, shuttling passengers from all walks of life to and from parties, brunches and meetings. The passengers range from silly, to seductive – to downright scary. But as long as Marcus keeps his radio on and his wits about him, there’s nothing he can’t handle…right? One more ride. The night darkens. The mystery deepens.

Written and directed by Black Lives, Black Words co-founders Reginald Edmund and Simeilia Hodge-Dallaway, respectively, “Ride Share” is a one-man play that steps on the gas and takes you along for the dangerous, thrilling ride. It is a new filmed premiere available digitally to audiences until July 25 through Writers Theatre.

Marcus has just boasted about his decadent $85K wedding and luxurious honeymoon in Aruba. But life happens and he must figure out a way to sustain his new wife and household. As far as he is concerned, Marcus’ life may as well have been eliminated. He toils at long hours as a ride share driver, and while the audience never sees his passengers, he is adept at accurately describing their appearances and personalities.

A drunk couple who offers extra money if Marcus will let them engage in intimacy in the back seat. A group of women on their way to a bridal shower, as they without cease criticize the bride to be. Or the woman in white who sits in the front seat and brings Marcus thisclose to cheating on his wife.

But no rider is as disgusting to Marcus, played by Kamal Angelo Bolden, than the man who fired him. As Craig recognizes his ex-co-worker, he comments that he was glad that Marcus landed on his feet. I suppose “landing on one’s feet” has a different meaning for different folks.

Marcus drives from Chicago’s Lincoln Park to the airport to Coal City and Joliet. He keeps on toiling because he doesn’t want to be seen as a failure. He makes it through nearly 665 trips, COVID-19 restrictions and hysteria, as well as drunken riders. He does all this with the help or potential harm of one invisible passenger—his conscience whom he refers to as the Dark Rider.

Bolden is a native of Peoria, IL, who graduated from Bradley University with a degree in Business Administration-Entrepreneurship. After several years of working in corporate America, he took a leap of faith to pursue acting full time, going on to star in dozens of regional theatre productions in Nashville and Chicago, including the lead role ‘Hero’ in the Goodman Theatre’s production of Suzan-Lori Parks’ “Father Comes Home From The Wars Parts 1, 2, and 3.”

Off-Broadway, he received the AUDELCO Award for Best Actor for his work in “Reparations” at the historic Billie Holiday Theatre. In just a short time in Los Angeles, Bolden has gone on to create several memorable characters on television, including recurring roles on NBC’s Chicago Fire, FOX’s Rosewood, HBO’s Insecure and FOX’s The Resident.

It gives voice to some of the most contemporary political Black writers from both the U.S., Canada and the U.K., asking them to explore the question, “Do Black lives matter today?”

Director Hodge-Dallaway says, “As a director, you are constantly looking for a story that thrills, excites and offers creative challenges. ‘Ride Share’ is a rare gem that every director and actor would love to get their hands on. Every turn of the page takes you deeper into the subconsciousness of Marcus and shines a light on America by questioning the obtaining of the American Dream for Black and POC front-line workers.

“Reginald’s writing is brutally honest, beautifully raw and boldly unapologetic – it has been a dream to direct this important piece of work, our first feature film at Black Lives, Black Words, in partnership with Writers Theatre. I simply cannot wait to share it with the world.”

I have been able to view a few virtual performances presented by different theatre companies during the last year.

Bolden does a great job of keeping an audience’s attention.

For information about virtual ticket pricing, which is tiered according to how many viewers are in a specific household, call the Writers Theatre box office at (847) 242-6000 or visit [www.writerstheatre.org].