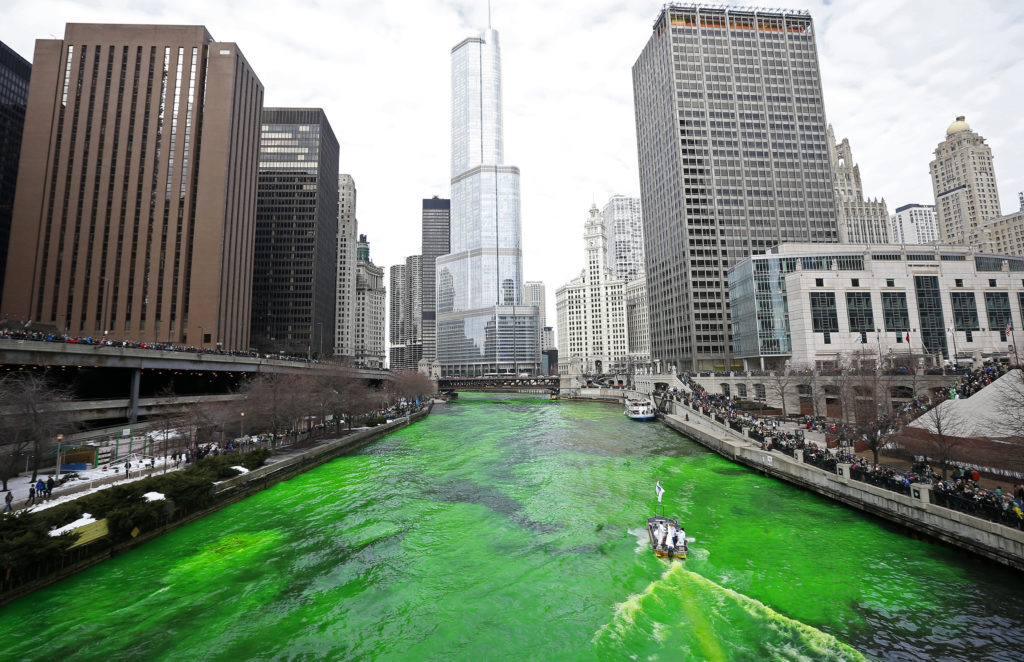 Green beer, corn beef, cabbage, oh my! It must be St. Patrick’s Day in Chicago. From the annual dyeing green of the Chicago River to numerous St. Patrick Day Parades to savoring a pint of Guinness at your local pub, there are countless ways to let the luck of the Irish rub off on you this March.

Dyeing of the Chicago River

Feeling green? For over half a century, residents and visitors alike have watched in awe as the rushing Chicago River is dyed bright green before St. Patrick’s Day.

Traditionally held the Saturday before the holiday, this year’s verdant explosion will take place on March 12th, 2022. Hit the streets early (optimal viewing is between State and Columbus) as you’ll want to catch a glimpse of this iconic event before the dye fades.

Bagpipes, banners, and lots of leprechaun-like costumes will be in full effect as the Chicago St. Patrick’s Day Parade resumes its festivities this year.

On March 12th, 2022, thousands will turn out to celebrate the way of the Erie at one of the largest parades in the country.

Frivolities commence at noon, and you can expect plenty of vibrant floats, flags, step dancers, and marching bands during the three-hour celebration.

Pro Tip: Keep your eyes peeled for the lovely Kelley, who was crowned the parade queen, and head out early to snag your perfect parade spot along Columbus Drive.

The South Side of Chicago wears its green with pride, and this predominantly Irish neighborhood has been commemorating the death of Saint Patrick for over 40 years.

The South Side Irish Parade is a family-friendly attraction featuring all things from the Emerald Isle.

A kid-friendly affair, absolutely zero drunken or disorderliness is tolerated at this upstanding event.

Pro Tip: The revelry will kick off in the Beverly neighborhood from 103rd Street and proceed south down Western Avenue to 115th Street.

Embrace the community of Craic when you hightail it to Chicago’s Northwest side on March 13th, 2022.

The Northwest Side Parade is an annual event designed to honor the Irish community’s faith, family, and illustrious emerald-shaded heritage. Grab the kids, as this shamrock-filled fete is family-friendly and promises to leave you feeling luckier than a leprechaun.

Parade-goers can follow the March Madness by beginning at the William J. Onahan School and staying south on Neola Avenue to Northwest Highway, then heading north on Northwest Highway up to Harlem Avenue.

With exhibits and special events ranging from corn beef and cabbage dinners to live musical concerts celebrating the Irish Midlands, there is always something magical to witness here.

Get into the green spirit with a perfect pint of Guinness and perhaps a shot of Jameson at Chicago’s legendary Chief O’Neill’s Pub.

Opened by two Irish-born musicians and named after the famed Irish immigrant who served as the General Superintendent of Chicago’s police force at the turn of the 20th century, this local watering hole is as authentic as it gets.

Come hungry as the fare here is pure Gaelic goodness. It includes knockout hits like the Dublin Broil and the delectable Steak and Guinness Pie.

Feel like you are back in the old country when you step foot inside the warm and inviting Ravenswood neighborhood haunt of O’Shaughnessy’s Public House.

Soak in the crimson red exterior, the tin ceiling, and custom-built wood bar, all of which evoke the charm of the Eire. The owner’s father immigrated from the Emerald Isle himself, so you can expect loads of authentic Irish flavor as you knock back your beer and corn beef and cabbage egg rolls.

Other delicious highlights include the perfectly seasoned curry chips.

Where to Stay in Chicago for St. Patrick’s Day

Not a resident of the Second City? No problem! With diverse accommodation options ranging from trendy boutique hotels in Hyde Park to luxurious inns just moments from Lincoln Park, we have several Chicago Hotels to assuage even the pickiest travelers.
As always, make your reservations regret-free, knowing you are always guaranteed our lowest rates online.

Are you ready to seize the spirit of Slainte this March?

Rifle through your closet and pull out your most verdant hued finery as you prepare for the epic return of St. Patrick’s Day to the Windy City.

Whether you seek hearty helpings of Hooligan madness at the Chicago St. Patrick’s Day Parade or want to keep the community and faith close to heart at the Northwest Side Parade, there are so many ways to wear your Craic with pride this Spring!

This article originally appeared on Tripster.