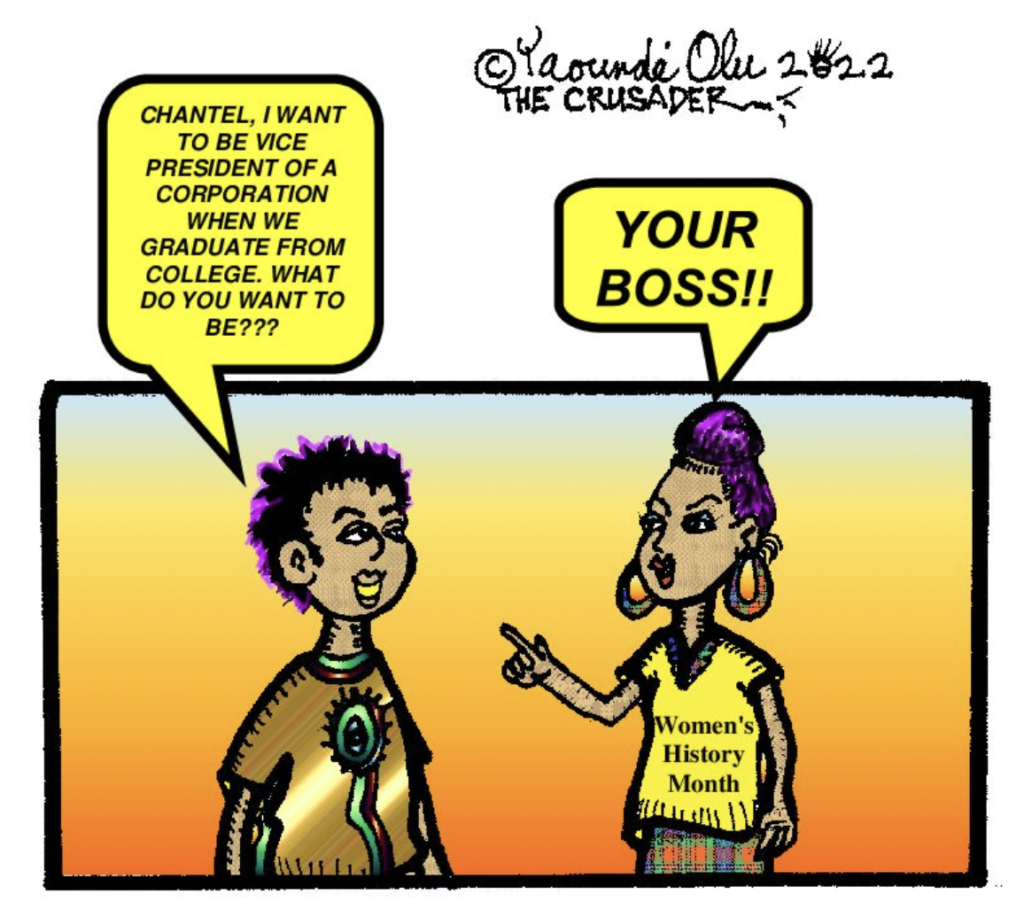 March is Women’s History Month. This is an annual period that highlights the contributions of women to events in history and contemporary society. This year in the United States, it begins on Tuesday, March 1.

In March 1980, after celebrations had spread across the country, President Jimmy Carter declared that March 8 was officially the start of National Women’s History Week. Since 1995, presidents have issued a series of annual proclamations designating the month of March as Women’s History Month.

The need for a period to celebrate women has come from the fact that women have been basically ignored historically. As recently as the 1970s, women’s history was basically an unknown topic in the general public’s consciousness, and in K-12 school curricula.

The lack of visibility of women’s accomplishments is probably one reason so many women, and especially Black women, tend to accept denigrating language referring to them that is so prevalent in rap music.

Recently, two Black men were overheard discussing women, and both agreed that women had not contributed anything of value to the world. The men in question genuinely believed what they were saying because women have not been visible.

Of course, there are a few examples where they have been recognized, for instance, a person begrudgingly agreed that Rosa Parks was a catalyst for the Montgomery Bus Boycott. But the person then attributed her being “tired” as the reason she refused to give up her seat in the white section of the bus. The person did not know that Rosa Parks was a trained civil rights activist.

The fact of the matter is that misogyny is alive and very well in 2022 in America. Women have done almost everything but walk on water; there are amazing accomplishments in almost every field of endeavor, yet too many people, both male AND female, Black, white, AND other, seem reluctant to give women accolades for their accomplishments.

This national tendency to embrace misogyny might be why Hillary Clinton lost her bid for president of the United States. This misogyny is also probably behind the tendency for many people to ignore allegations of sexual misconduct reported by victimized women. It is rare that they are believed when they finally get up the nerve to go public with their accusations, especially if their alleged abuser is rich and powerful.

Moreover, in popular culture, whenever there is talk about a breakup of a high-profile marriage, it seems that in a majority of the cases women are blamed for the dissolution of the relationships, even though most people with this opinion have no personal knowledge about the internal workings of the relationships and don’t personally know the individuals involved.

Women theoretically make up one-half of the population, and in the African American community, they have been instrumental in ensuring that the Black family has survived. The fact that over 70 percent of Black children are raised in single, female-headed households, speaks volumes regarding the disproportionate responsibilities that are taken on by Black women.

At this point, it might be feasible to note incredible accomplishments recently achieved by two pioneering Black women.

The United States has elected a Black female vice president, Kamala Harris, the first in its history. Also, President Joe Biden has just nominated the first Black female to the Supreme Court of the United States, Ketanji Brown Jackson. This is huge!!! Hopefully, she will be confirmed without much opposition.

With this said, we should celebrate the accomplishments of women, and Women’s History Month provides us with that opportunity. Our girls need to see love, recognition, and approval, coming from society; after all, they will be the ones raising future generations. A Luta Continua.