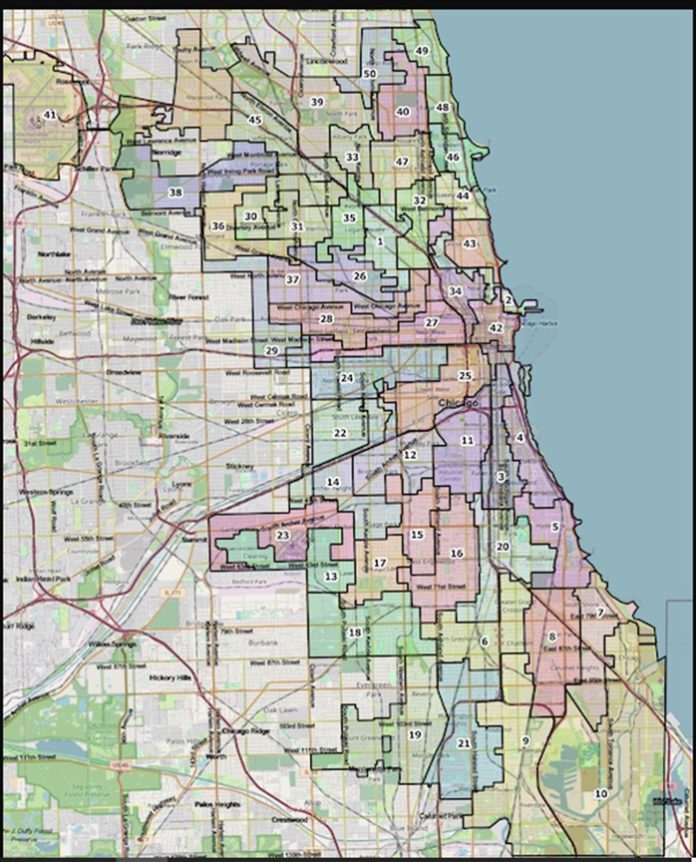 Blacks would lose the 34th and 17th Wards and would have just 16 wards instead of 18 under a draft filed with the City Clerk’s office by the Latino Caucus.

The plan is one of several that will be proposed as the Chicago City Council moves toward remapping the city’s 50 wards by December 1, based on the 2020 Census.

As Chicago’s largest minority group, the City Council Latino Caucus is seeking more than its existing 13 wards to reflect its growing population that it says remains underrepresented at City Hall.

Under the Latino Caucus plan, Alderman Carrie Austin’s ward, which includes Morgan Park, Pullman and Roseland, would be moved to the Near North Side, where it would be 63 percent white.

Alderman Gilbert Villegas (36th Ward) said the move is not because of the federal indictment Austin faces, but rather to accommodate the explosive population downtown and along the lakefront.

Under the Latino Caucus’ plan, Alderman Howard Brookins’ 21st Ward would absorb the neighborhood areas currently included in the 34th Ward. It would be sandwiched between Alderman Anthony Beale’s 9th Ward and Alderman Matthew O’Shea’s 19th Ward, which is predominately white.

Currently, the 34th Ward is reportedly the smallest of the 50 wards with a population of just 44,000 residents. Because Chicago’s population in 2020 was 2,746,388 residents, each ward must have 54,928 residents. Blacks, Latinos and other minority groups are protected under the Voting Rights Act.

In news reports, Alderman Villegas said the draft is a “starting point” for negotiations. He also said that the 15 Latino wards are “right on target” with what the census data shows.

In news reports, Alderman Jason Ervin (28th Ward) who chairs the Black Caucus, called the Latino Caucus draft “illegal’ and “has no chance of passing.”

In the Chicago Tribune, Alderman Moore said the Latino Caucus’ ward map “won’t fly. You come over there and try to pull out a Black ward, they won’t be able to get majority support for that.”

The Black Caucus reportedly has drawn its own map that preserves 18 Black wards but hasn’t publicly released it.

Alderman Michelle Harris, (8th Ward), is the chair of the City Council’s Rules Committee as the floor leader for Mayor Lori Lightfoot and heads the Council’s official remapping effort. Harris reportedly is determined to preserve the city’s 18 Black wards despite the shrinking Black population.

Any map that draws at least 10 City Council votes automatically triggers a referendum that would allow Chicago voters to choose the new map.

With her re-election hopes on the line, Mayor Lightfoot is under pressure by the Latino Caucus to include more Latino representation at City Hall. So far Latinos have gained more positions as department heads. Last month, Latinos succeeded in lobbying her to appoint Pedro Martinez as the Chicago Public School’s first Latino CEO. Early this month, Lightfoot appointed Rosa Escareno, former Commissioner at the Chicago Department of Business Affairs and Consumer Protection, as the new Chicago Park District Superintendent after Mark Kelly resigned amid a sex abuse scandal.

Meanwhile community groups are demanding the City Council redraw a map that would make Greater Englewood an area that would be represented by one alderman instead of the current six. They include Aldermen Moore (17th), Roderick Sawyer (6th Ward), Raymond Lopez (15th Ward), Stephanie Coleman (16th Ward), Jeanette Taylor (20th Ward) and Pat Dowell (3rd Ward).

Greater Englewood has been split up among six different wards since at least after the 2000 Census. Advocates say all six aldermen may not serve Greater Englewood equally in terms of priority.