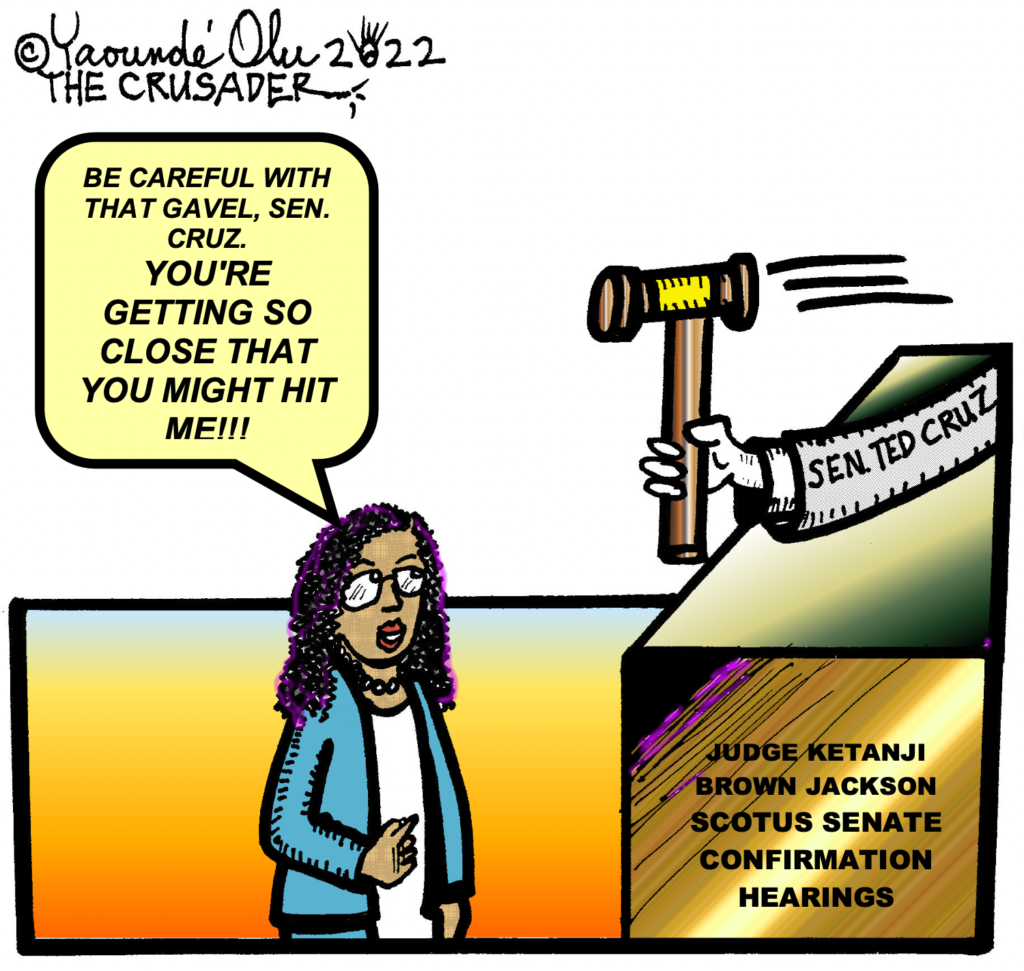 Recently, she attended her confirmation hearings, and at best, it appeared to be a bittersweet moment. It was sweet because it is the first time since SCOTUS’s first assembly in 1790 that a Black woman might get the opportunity to serve. And it was sweet because of the pride that many Black women feel because one of their own may actually end up on the Supreme Court. Democratic Senator Cory Booker’s speech of support for her was also very sweet.

The bitter part was evident in the atrocious way that she was treated by members of the Republican Party who grilled her in a very hostile manner. The hypocrisy shown in the range of questioning by Republican Senator Ted Cruz and others raised the ire of onlookers and was disingenuous. They asked questions that were outside her prospective range of duties. More importantly, it was obvious that their goal was to paint her as someone who is soft on crime.

For a population that has been observing some of the antics of members of our federal government, the behavior of these political leaders is setting a very bad example of what it means to be a public servant.

If youth are observant, this behavior will no doubt cause many to lose faith in the United States. Actually, a lot of them have already lost respect due to what has been happening in the highest seats of power during recent years.

The attacks on Judge Brown Jackson were vicious, but she took the high road and did not respond negatively. It was extremely unpleasant watching her being raked through the proverbial coals; hopefully, most people understood that this was a political ploy designed to derail her candidacy and to prime the pump for a Republican Party victory in the 2024 elections.

One of the saddest things about what’s happening in American politics is the hypocrisy demonstrated, especially by members of the Republican Party. If the Supreme Court is supposed to be the highest court in the land, its members should be impartial. Yet, if you consider the range of questioning, it appears more and more that the goal is to only allow people on the court who have a certain bias in particular areas. Members of the Senate committee that vets prospective justices want to ensure that they only get new members who have a bias in a particular direction.

If they only want Justices on the court who hold certain beliefs, it somewhat guarantees that the whole process is a farce.

There is increasing evidence that our democratic government may be becoming a thing of the past; apparently one whole political party has literally turned rogue. The Republican Party has basically abdicated its responsibility to ensure that a democratic society prevails. Their actions display a lack of decency in that they oppose everything that does not lend itself to their power goals.

One of the saddest responses to the Republican’s antics during the confirmation hearings was that a certain group of African Americans have turned against Judge Brown Jackson.

They think it’s despicable that she allegedly favored violent criminals and gave them light sentences. These people are ignoring the fact that 1. A sitting member of the Supreme Court makes decisions in concert with nine other justices; they don’t decide on their own what will happen in a particular case; and 2. Judge Brown Jackson’s decisions don’t appear too much out of range from what other judges have made.

More importantly, these critics had nary a word to say about the terrible manner in which Judge Brown Jackson was treated. You would think that, at the very least, her Black opponents would take issue with that.

Hopefully, in spite of this, Judge Brown Jackson will be confirmed and do what is expected of her, contribute to rulings that will help make America a better place, and that would be really sweet! A Luta Continua.