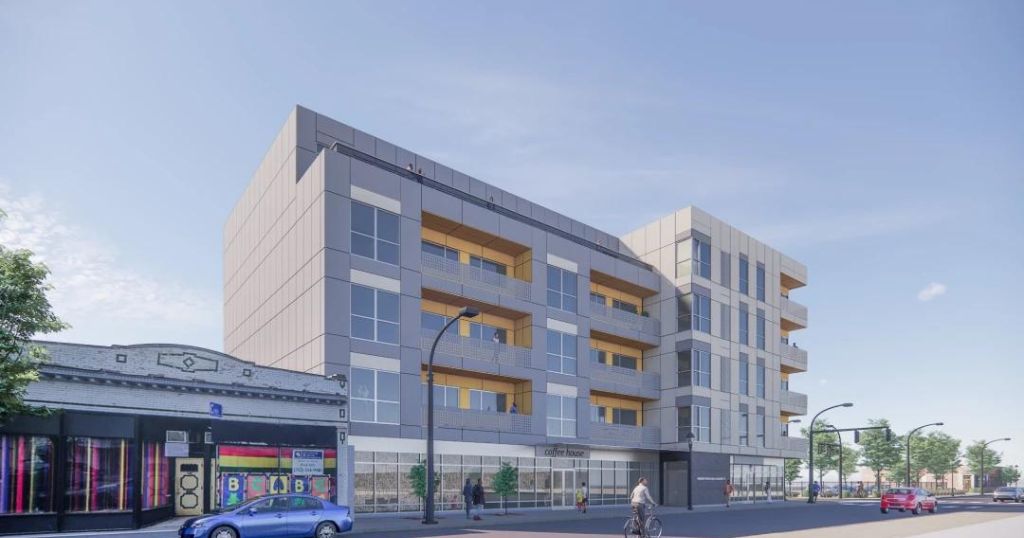 “I am thrilled to begin construction on Auburn Gresham Apartments and many other transformative projects on our South and West Sides,” said Mayor Lightfoot. “This transit-oriented development will not only bring affordable housing and dining options to the neighborhood but will revitalize this corridor for all South Side residents to enjoy. I look forward to making continued, unprecedented investments in our targeted neighborhoods in partnership with our communities to realize their visions for their homes.”

A joint venture of minority-owned Imagine Group and Evergreen Real Estate Group, the $43 million project is the result of a Department of Planning and Development (DPD) request for proposals (RFP) for vacant City land at 79th and Green streets. Envisioned as a single building in 2021, the proposal was subsequently refined through three community workshops that shifted more than half of the proposed units to a second City-owned site at 79th and Halsted Street.

The two-building layout ensures the size and scale of both buildings are contextual with neighbors while adding new vitality and density to formerly vacant City land, according to DPD Commissioner Maurice Cox.

“Auburn Gresham Apartments represents a dream come true for dozens of families that see their future on 79th Street,” Commissioner Cox said. “These stakeholders helped draft the RFP, they helped refine the original proposal, and they’ll be the ones who directly benefit from the new housing, shopping and dining options that this project brings to the neighborhood.”

All the apartments in both buildings will be priced at affordable levels, with monthly rental rates ranging from approximately $925 to $1,250 per month.

“From the moment we heard about INVEST South/West, we knew we wanted to be part of this transformational community development initiative that will bring countless social, economic and quality-of-life benefits to the areas that need them most, including Auburn Gresham,” Imagine Group principal Torrey Barrett said. “As the first INVEST South/West project to be approved by the City Council and secure both land entitlements and financing, Auburn Gresham Apartments advances the vision set forth by Mayor Lightfoot and shared by our team and the many community stakeholders who helped shape this development.”

“Leveraging Evergreen and Imagine Group’s familiarity with complex real estate developments that utilize multiple sources of funding, we have made quick progress in moving toward construction,” added Evergreen Real Estate Group development director David Block. “Soon, these long-vacant parcels will house a pair of vibrant mixed-use buildings whose combination of community-oriented retail and affordable housing with serve the Auburn Gresham neighborhood for generations to come. We are proud to be partnering with a South Side-based team of developers, designers and builders who understand how best to realize the needs of the community through the development of these sites.”

DPD and the Chicago Department of Housing (DOH) are supporting the project with $18 million in Tax Increment Financing, $18 million in Low-Income Housing Tax Credits equity, a $2.5 million HOME loan and a land write-down of approximately $180,000.

“Today’s groundbreaking is the culmination of the work of many stakeholders and residents who have a clear vision for this community,” DOH Commissioner Marisa Novara said. “Auburn Gresham Apartments will not only add affordable housing but bring much needed amenities that will benefit the entire community and its residents – and all right down the street from public transit.”

Anticipated to be under construction for approximately 18 months, the two development sites feature temporary murals by Chicago artist Rahmaan Statik.

“Thanks to Mayor Lightfoot, the Department of Planning and Development, Imagine Group, and Evergreen Real Estate Group: what once was vacant land will now be transformed into something beautiful,” Ald. David Moore (17th) said. “By highlighting minority developers, architects and contractors the Auburn Gresham Apartments will inspire minds, represent empowerment, and make a difference in the community.”

INVEST South/West is an urban revitalization strategy being implemented by Mayor Lightfoot that is guiding $1.4 billion in public and private investment within 10 West and South side community areas.

Other public investments in Auburn Gresham include $11 million in streetscape improvements at 79th and Halsted, a new $35 million Auburn Park Metra station, a $2.6 million Chicago Recovery Plan grant to re-open Save A Lot foods at 7908 S. Halsted, $10 million in assistance for the Healthy Hub at 839 W. 79th and an approximately $500,000 grant to St. Sabina Church to provide corridor ambassadors along local retail streets.

Through the remainder of 2022, additional INVEST South/West RFP projects are expected to break ground in Englewood, Austin, Humboldt Park and North Lawndale.