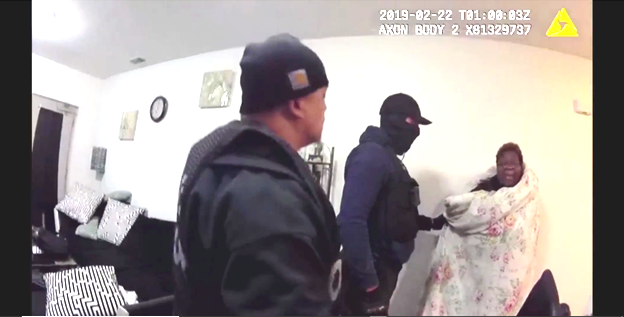 Anjanette Young, the innocent Black woman who Chicago police handcuffed while she was naked during a wrongful raid of her apartment, will receive a nearly $3 million settlement from the city.

The City Council on Wednesday, December 15, approved a $2.9 million settlement by 48-0 vote. The settlement amount was approved earlier this week by the Council’s Finance Committee and had the support of Mayor Lori Lightfoot.

Prior to the vote, Alderman Jeanette Taylor said, “$2.9 million might seem like a lot, but it will never give Ms. Young back her dignity and respect and the trust that she’s lost.”

Several City Council members on Wednesday expressed support for the “Anjanette Young Ordinance,” which would radically reform the way the Chicago Police Department executes search warrants. While certain reforms have already been announced, such as requiring a lieutenant or higher be present for any raid and an independent investigation be conducted beforehand to verify the information used to obtain the search warrant, the proposed ordinance would go even further.

The ordinance would require law enforcement to knock, announce themselves and wait a minimum of 30 seconds before breaking down a door during a raid. Bodycams would be required to stay on for the entirety of a raid, and children would not be allowed to be handcuffed under the provisions of the ordinance.

On February 21, 2019, Chicago police incorrectly raided Young’s apartment. Their actual target lived next door and was wearing an electronic monitoring device that police should have been able to track.

Young was changing her clothes when the raid occurred, and police immediately put her in handcuffs without allowing her to get dressed.

Bodycam video of the raid showed Young pleading with 15 officers— many of them were white males— over and over again telling them they had the wrong home. The Civilian Office of Police Accountability (COPA) said its investigation found that Young was left handcuffed naked for nearly 10 minutes. One officer tried to cover her with a jacket, and then later a blanket. Young was eventually allowed to change, and she was then placed in handcuffs again. She was handcuffed for almost 17 minutes total, the office said.

COPA is recommending that eight of the 15 officers be fired or suspended for their role in the botched home raid. One COPA report raised nearly 100 allegations of misconduct against 15 officers involved in the raid.

The story emerged after CBS2 Chicago first reported on Young’s case as part of an investigation into a pattern of Chicago police raids on the wrong residences.