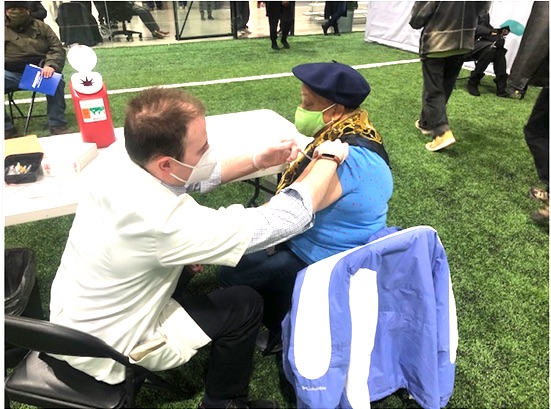 Efforts to increase COVID-19 vaccinations to Chicago’s Black and minority communities shifted into high gear this week as the city expanded eligibility requirements in zip codes on the South and West sides.

Appointments and lines at the United Center continue to grow after Mayor Lori Lightfoot expanded eligibility to residents living in nine zip codes that include South Shore, Auburn Gresham, Chatham, Austin and Bronzeville.

Separate vaccination drives have been held in Black neighborhoods on the South and West sides drawing heavy turnout, and appointment times that vanished in minutes.

On Tuesday, March 16, on the one-year anniversary death of Illinois’ first COVID-19 victim, Alderman Anthony Beale held a vaccination drive at the Pullman Community Center for residents 40 and over. About 1,000 residents in the 9th ward were vaccinated with Pfizer’s first dose during the event. They will receive the second dose at another vaccination drive in three weeks.

On the West Side, Loretto Hospital on Friday, March 12, kicked off its first weekend of free vaccinations at Amundsen Park, 6200 W. Bloomingdale Ave. in the Austin neighborhood. The vaccination drive will be held Fridays and Saturdays through April 17. Vaccinations are open to Austin residents 18 and over. To register for an appointment, call 773-996-7937 or visit online at [rebrand.ly/Loretto].

From March 14 to April 18, free vaccinations will be provided by Rush Hospital at the Catalyst Circle Rock Charter School, 116 N. Central Ave. in Austin. To register for an appointment, call 312-563-0767 or register online at [rush.edu/Austin].

At each of the vaccination drives in Austin, residents need to bring ID as proof of address before getting the vaccine shot.

In his Sunday worship message on March 14, Reverend Otis Moss III said Trinity United Church of Christ in Washington Heights on the Far South Side recently hosted a vaccination drive. Moss said all 408 appointment slots were gone in 12 minutes after they were made available. He said the high demand left no room for the church to accept walk-in appointments.

But the location that’s drawing the most attention is the United Center mass vaccination site on the West Side.

The site had been vaccinating seniors 65 or older since it opened March 10. But last week, Lightfoot expanded eligibility to include all residents living in five zip codes.

On March 13, she added four additional zip codes that have a high COVID-19 burden, according to the COVID-19 Community Vulnerability Index (CCVI), and currently have low vaccination rates; they received priority for vaccination appointments. Since then, 75 percent of appointments scheduled at the United Center have gone to Black, Latinx and Asian residents.

“Equity drives all vaccine distribution in Chicago, and we want to ensure that residents from the communities that have been most disproportionately impacted by the pandemic have access to this lifesaving vaccine,” said Lightfoot.

“The mass vaccination site at the United Center was chosen because it is easily accessible and is located on the West Side of Chicago. Our targeted approach to registration, along with initiatives like Protect Chicago Plus, is working in driving equitable vaccine uptake in our city. For the last week, 59 percent of those who received at least one vaccine dose are Black or Latinx, which matches the demographics of our city.”

The mass vaccination site at the United Center has the Pfizer vaccine available for residents, who must return three weeks later for their second inoculation.

People living in one of the target ZIP codes can register by calling the COVID-19 Help Line at 312-746-4835, and there is an online registration platform that is being shared with people in these communities that includes a voucher code. You must live in one of the ZIP codes above to register, otherwise your appointment will be cancelled.

“These are the areas where we’ve seen some of the highest rates of severe illness and death throughout the pandemic, and where access to the vaccine has been most challenging. So, we had to act,” said CDPH Commissioner Dr. Allison Arwady. “We’re also doing this because if we want to defeat this pandemic, we need to control the spread of the virus where it is the worst, and that impacts all of us.”

The Protect Chicago Plus program, which initially targeted 15 hard hit communities with resources including more vaccine, continues to support the equitable distribution of COVID vaccine in Chicago.

Data show that communities where the program initially launched are seeing the fastest increase in vaccination rates in the city.

When comparing coverage from the beginning of February to the beginning of March, communities like Gage Park, South Lawndale, Belmont Cragin and Archer Heights are seeing a doubling, tripling or quadrupling of the rate of people vaccinated. 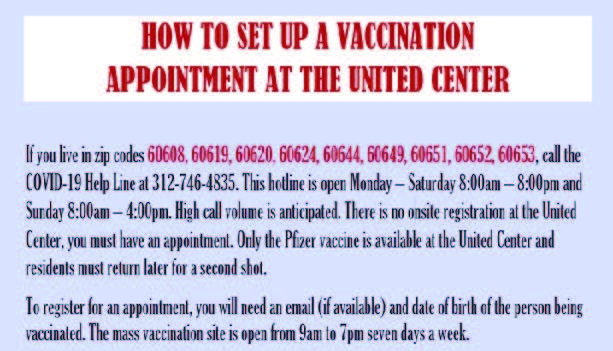