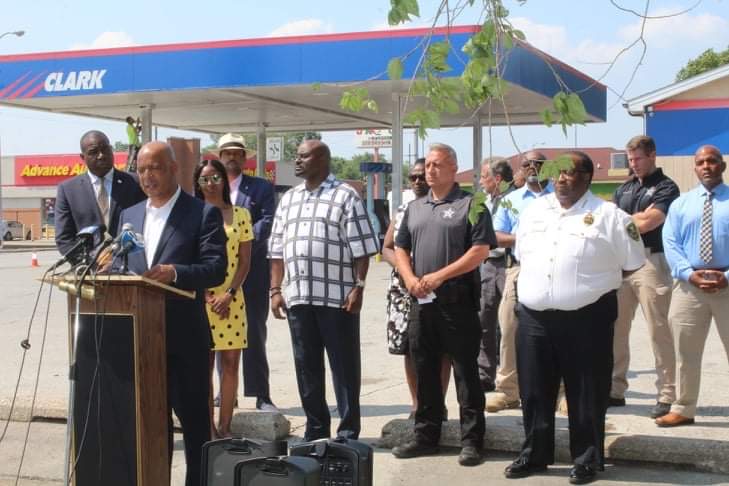 Charges have been filed against two juveniles in the shooting of Wallace Broadnax.

During a news conference on July 6, Lake County Prosecutor Bernard Carter announced the charges at a Clark gas station located at 23rd Avenue and Grant Street, the site of the shooting.

Broadnax, a former Gary firefighter and member of the Indiana Basketball Hall of Fame, was shot and killed when two teens attempted to rob him.

The alleged shooter is a 14-year-old Gary resident, while the second youth is a 15-year-old Chicago teen.

Gary Mayor Jerome Prince called the press conference and used the occasion to announce that he was going to sponsor legislation aimed at addressing security at local gas stations.

“Businesses with a history of violence are going to be required to have armed security, particularly in certain hours…particularly between the hours of dusk to dawn,” said Prince.

The legislation proposed by Mayor Prince is called the Wallace Broadnax Amendment because it is an amendment similar to a piece of legislation introduced last year.

The legislation amended a prior ordinance requiring security cameras for certain businesses that operate between the hours of 10 p.m. and 6 a.m. to include a provision for an armed guard during those hours and a 24-hour guard if the business has been the scene of a previous violent crime.

The ordinance seeks to address many problems that have been created with certain businesses that open late in the evening and early morning.

The previous ordinance failed to provide specifics regarding regulations for security guards. The bill also lacked a clear definition for what constitutes as a violent crime.

“We discussed the essence of this robustly. I think it was last year. There are a lot of lingering questions I didn’t get answers to,” stated Council President William Godwin, D-1st.

Mayor Prince said the new legislation seeks to address those concerns and is hoping that the council would pass the measure later this month.

“This is a very sensitive situation. I ask the administration and everyone else to roll up our sleeves. There has to be a compromise in some way for us to get this done,” Councilman Mike Brown said. He would like to see the city implement a ShotSpotter system along with surveillance cameras and body cameras for officers.