‘Till’ recounts a mother’s anguish 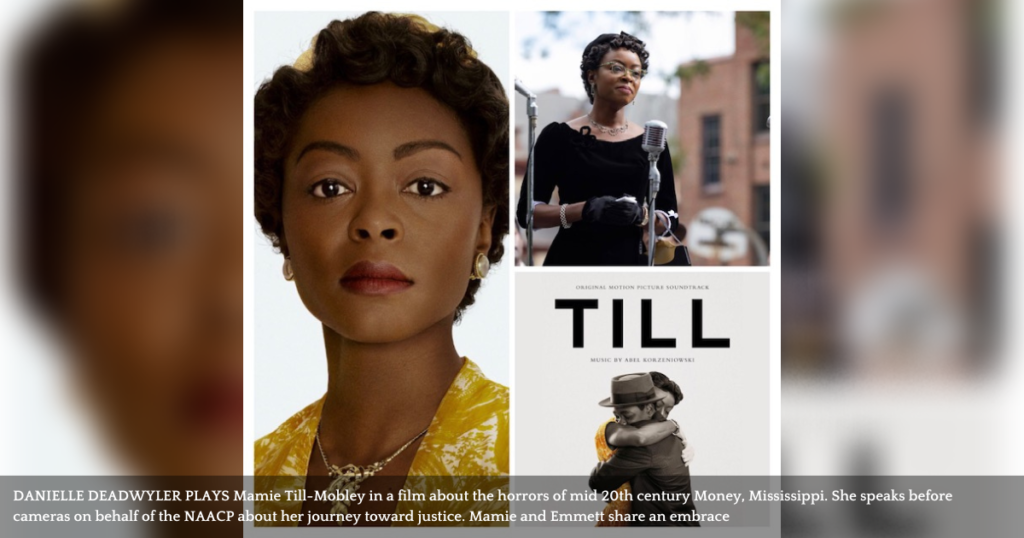 Most everyone knows the Emmett Till story but to see it on the big screen with a focus on his mother, Mamie Till-Mobley, was a pure, sad, haunting delight. All those words can be used to describe my feelings as I watched “Till” in the theater.

Danielle Deadwyler, as Mamie, showed a strength that opened up the doors to the modern Civil Rights Movement, but at such damning expense and sacrifice.

How do you muster up the strength to allow your son to travel to Money, Mississippi, during the summer of 1955? Mamie was totally against it, but her mom, Alma Carthan, played by Whoopi Goldberg, wanted young Emmett to get a taste of his roots and culture.

Emmett is having a good old time with his cousins, even though he frowned upon having to pick cotton, during the first day of his visit. But he was able to get a small taste of country living—at least for a short while.

But things go wrong after Emmett, 14, supposedly whistles at or flirts with a white female shop owner (Carolyn Bryant). She runs out the store after Emmett and brandishes a gun at him and his cousins. The boys vow to keep the encounter a secret. Later, Emmett is hunted down by the woman’s husband, his half-brother, and others. He’s ordered at gunpoint from his great uncle’s home—who is powerless to do anything to save the young man.

History reveals that Emmett’s grotesquely mutilated body is found days later in the Tallahatchie River. History also shows us the fortitude and keen foresight that Mamie had in showing his body in full view in his casket that was prepped by Taylor Funeral Home for services at Chicago’s Roberts Temple Church of God in Christ on the South Side.

I say foresight because as we’ve heard, whenever there has been a film or doc about this horrendous time in African American and United States’ history, she wanted to show the world what had happened to her boy. It was necessary to show the evils of the animals in Mississippi who had taken her son’s life.

History shows us that at the trial the two men were acquitted of the crime and the sad gaze that Till-Mobley gave to Carolyn as she so smugly held her baby in court.

But she maintains a hard resolve through a heart wrenching trial proceeding.

True enough this is a tearjerker—from beginning to end—because most folks know the outcome going into the theater.

However, director Chinonye Chukwu does a good turn at sharing the joy and goodness of Till-Mobley. We also see the joy of Emmett, as the film opens with the mother and son in Marshall Field’s shopping for his first trip outside of Chicago.

Deadwyler does a tremendous job as Emmett’s mother. She’s happy, concerned, anxious, angry, horrified, determined and steadfast in her duty to bring her son’s murderers to justice.

As she says in the film, “If this country fails to protect the Black body, America has not met its promise.”

And we all know how years later, Carolyn Bryant admitted that she lied.

According to a recent CBS2 Chicago news report, Mamie Till-Mobley and Emmett will be memorialized with a sculpture to be erected at a corner near Argo Community High School in Summit, Illinois, from where Mamie graduated.

The news report also reads: “The school is also launching a Scholarship Fund for students dedicated to a life of fighting for social equity in education.

School leaders said Till-Mobley is one of Argo Community High School’s most influential graduates. She was the first Black student to make her place in the National Honor Society at Argo, and only the fourth Black student to graduate from the school.”

Jalyn Hall, who plays Emmett Till, is receiving early Oscar buzz for his exceptional role.

“Till” is showing in theaters everywhere.