THE CRAZINESS OF WAR 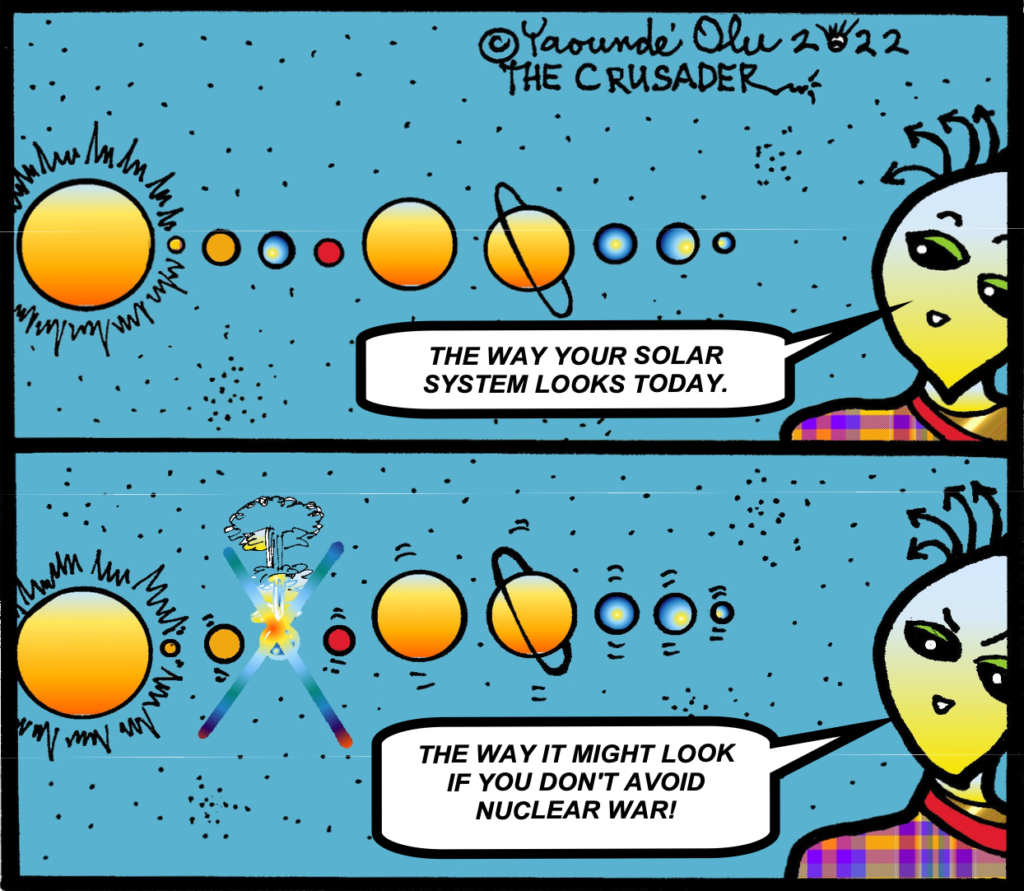 The specter of war is currently rearing its ugly head. Vladimir Putin, the president of Russia, is currently on a rampage fueled by dreams of conquest. Putin has invaded the Ukraine! For some, his actions bring to mind the former dictator of Nazi Germany, Adolf Hitler. Others see his actions as an attempt to revive the defunct Soviet Union.

More ominously, there are those who believe that Putin is not all right in the head, and that he would be willing to use nuclear arms if that is his last resort to accomplish his aims.

So far, (at press time) Putin’s attacks on Ukraine have resulted in more than 1.4 million Ukrainian refugees. Thousands of Ukranians, Russians and possibly some others have lost their lives, and people around the world are rallying to help the beleaguered Ukrainians.

Once upon a time, there were suspicions that our former U.S. President, Donald J. Trump, had authoritarian inclinations. He gave us many clues, but this admiration was really brought home when he openly called Putin a “genius” after news of his conquering activities in Ukraine became evident.

One of the greatest ironies of all is that Putin is accusing the Ukrainian government of being neo-Nazis, even while he is bombing them out of their homes and decimating their country.

What goes on in the minds of people like Vladimir Putin who think it is alright to wage war on a sovereign nation and to slaughter the people? How can a leader sleep peacefully at night knowing that he is causing the deaths of thousands of human beings?

There is something about that mindset that is ancient, yet malevolently crazy. Wars have been waged ever since human beings became aware of other humans who differed from themselves. If wars were really logical and productive, they wouldn’t still be happening.

What occurs far too often is the notion of revolution. This is folly; to revolve is to go around in circles. What needs to happen in the human population is evolution, i.e., evolving to a higher level.

There needs to be a fundamental change in the thinking of the world’s leaders if the human race is to survive. What happens now is the repeated replacement of indigenous leaders with others who don’t do much better than their predecessors.

People give their lives in so-called righteous wars only to find themselves governed by clones of their former inept leaders. And no group in the human family today can claim a monopoly on being beyond reproach.

Regarding Ukraine, a white newscaster asked an African American pundit what he thought about the situation in Ukraine and whether or not it had any relevance for Black Americans. The person in question, in so many words, said that he was conflicted.

On the one hand, he saw the suffering that is being experienced by the Ukrainians and had some sympathy. On the other hand, he expressed concerns that Black immigrants in Ukraine are being treated unfairly; that they are experiencing bigotry and maltreatment.

He gave an example that Blacks have to wait for Ukrainians to access transportation to flee their country first, before being granted that opportunity. So on the one hand he had sympathy, but on the other hand, he didn’t.

This is why the issue of perspective is important. Yes, it is true that bigotry is abhorrent and should not exist. But it is also true that some actions trump others. If the world is facing imminent nuclear annihilation because of what’s happening in Ukraine, it would behoove us to consider first things first.

It is more important to pull together as people in order to prevent the destruction of the world and make no mistake if nuclear war breaks out, that is what might happen.

Considering the foregoing, what is evident is that there are threats to the human family that come from authoritarians, and sadly the U.S.A. is split along those lines with one political party in love with that philosophy. Our survival as a species depends upon our ability to tuck away our differences in order to pull together to save us from people like that.

Actually, there is a hopeful light in this regard. Putin is increasingly being seen as a pariah by many people around the world, and he does not seem to have the unanimous approval of his people. But he IS dangerous. Hopefully, the world’s unified opposition to Putin’s machinations will stop him in his tracks and save us from ourselves. A Luta Continua.