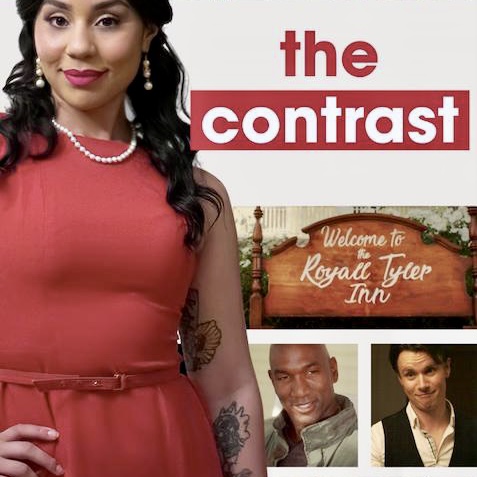 At a quaint bed and breakfast, Maria is about to marry her longtime beau – the smooth-talking hipster Dimple, when her maid-of-honor’s brother, Colonel Henry Manly, stops by to help set up. Fate introduces them, and they connect instantly, like old friends long separated. After a touching rehearsal dinner at which Dimple shows glimmers of his formerly caring self, Maria confesses her doubts to her father, who manages to put her mind at ease. As the wedding hour approaches, truths are revealed, chaos ensues, and Maria must decide between the obligation to her family and the quickening desires of her heart.

“The Contrast” is a contemporary adaptation of the first professionally produced play in America, in 1787, Royall Tyler’s “The Contrast.” Wikipedia describes it as an American play written in the tradition of the English Restoration comedies of the seventeenth century. It takes its cue from Sheridan’s The School for Scandal, a British comedy of manners that had revived that tradition a decade before. Royall uses the form to satirize Americans who follow British fashions and indulge in “British vices.” Because of this, the play is often concerned with portraying the contrast between European and American culture.

“The Contrast” is the first comedy written by an American citizen that was professionally produced. The play begins with a prologue written in heroic couplets. The play itself, a comedy of manners, evaluates home-made versus foreign goods and ideas. Its leading character, Jonathan, introduces to the theatre the “Yankee” stock character with his rough-hewn and plain-spoken manners.

In the film, Maria Van Rough is played by Grammy Winner Joy Villa, with other actors Lee Donoghue, Jermain Hollman, as Henry, and Deanna Rashell. “The Contrast” is directed by Sean Dube and Presley Paras and written by Chris Johnson.

This is a delightful rom com where in the end the villain, who I consider the groom to be, is outed for being just the obnoxious, philandering lout that he is. It starts so innocently, and Maria is trying to keep a vow that she made to her father, played by Lance Nichols, and even her father wants her to marry Dimples. But Dimples continues to appear so critical and demeaning to others that there is no hope holding out for promise of a productive union between the couple.

Dimple is cheating on Maria with one of her best friends—as is usually the case. Dimple’s financial future isn’t as bright as he posits it to be and in one chance meeting, he gets caught up in a business deal that only works to cement his dreadful demise.

“The Contrast” shows the difference between what Maria has thought for years to be her soul mate and a new friend in Henry, who turns out to be a man who exhibits the type of qualities for which she should have been searching all along.

The film is at times funny and high chaos as Dimple seems to affect everyone in a negative way—from his beloved Maria to the bed and breakfast owner, to the staff members and all of the guests who have been invited to the ill-fated nuptials.

Take a look at the trailer: https://youtu.be/U0fBed7TnOY.

“The Contrast” has a running time of 82 minutes and will not be rated by the MPAA. Mill Creek Entertainment will release the film on digital platforms on January 18, 2022.