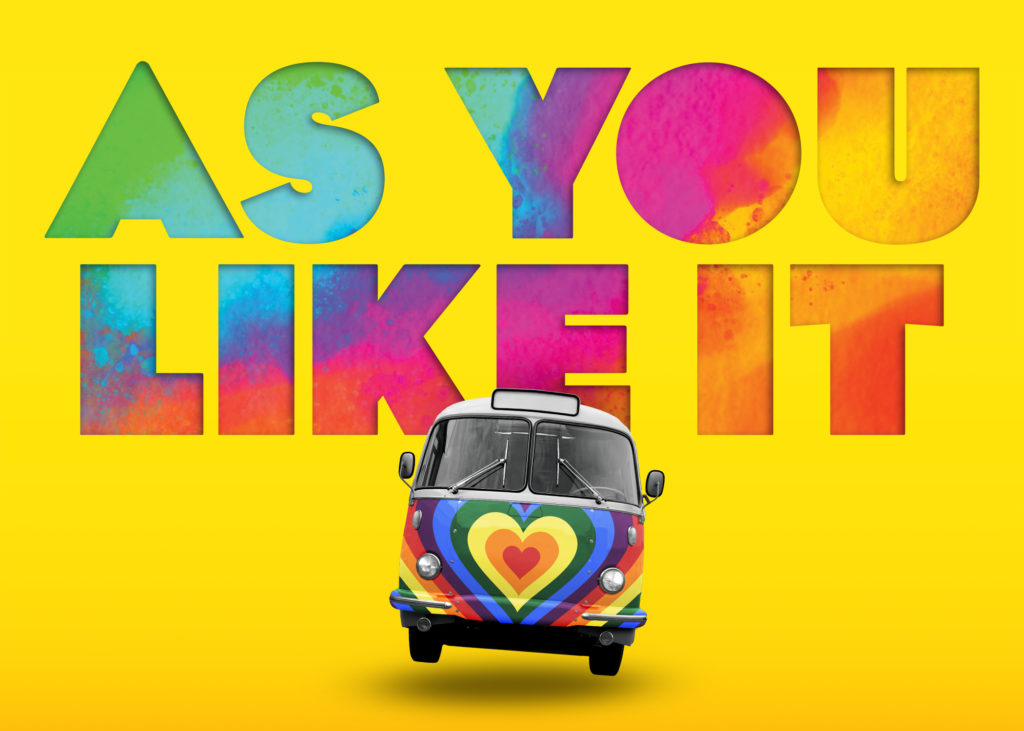 “As You Like It” extended until December 5 because of rousing reviews and audience endorsement Simply ‘beatiful.”

I simply love The Beatles. And if you throw a bit of Shakespeare in, it gets my “boujee” brain cells a turning. Such was the experience recently at the Jentes Family Courtyard Theater – Chicago Shakespeare Theater’s latest performance titled “As You Like It,” which has been extended through December 5. Special Thanksgiving holiday performances have been added!

It’s time to “come together” again in the magnificent setting of the Courtyard Theater! Find yourself transported to the 60s, when all you need is love.

The irrepressible Rosalind takes refuge in the forest. So, too, does her love Orlando, with much to learn from the woman of his dreams, now disguised in boy’s garb.

In a land where one brother is pitted against another, Duke Senior is usurped, then banished, by his younger brother, Frederick. A young man named Orlando faces a similar threat at the hands of his elder brother, Oliver. To escape harm, Orlando sets out for the freedom of the open road—though he wants nothing more than to remain behind with Rosalind, the young woman he just met. But Rosalind, daughter to the banished duke, is about to suffer her father’s fate, as she too is expelled by her uncle from the once-safe harbor of the court.

Frederick’s daughter Celia refuses to part from her beloved cousin, and the two plan to escape from his court in disguise—Celia as a shepherdess and Rosalind as her male page “Ganymede.” Accompanied by the court jester Touchstone, they flee the city to find Rosalind’s father, now living in exile among a band of loyal followers, somewhere in the Forest of Arden.

Far away from the court, Rosalind longs for Orlando, and so is caught completely off guard when, as Ganymede and in the garb of a young man, she comes upon her love in the forest. She decides to use her male disguise to befriend and teach him what it truly takes to win—and keep—a woman’s heart.

This high-spirited, music-filled adaptation infuses Shakespeare’s romantic comedy with the hit songs of The Beatles, lifting the playwright’s verse in beautiful harmony with the immortal music of the “Fab Four.” More than 20 musical numbers performed live onstage—including favorites like “She Loves You,” “Let It Be” and “Here Comes the Sun”—make for an exuberant celebration of love and connection.

This was my first outing at a live theatre performance, I wore my Beatles Abbey Road t-shirt, and it was simply “beatiful.” There was music and dancing and an all-around good time enjoyed by both the performers and the audience members. It was good to be out and back into the live theatre realm, because I have so greatly missed these experiences.

If you are not well versed on Shakespeare’s play, that is OK, as well. The lines are presented and infused with songs of the Beatles that fall right in step with the play’s content. The cast members are straight out of the 60s, with a colorful, love pulsating passenger van nicely centered in the background.

Other songs included in the production are “Can’t Buy Me Love,” “Got To Get You Into My Life” and the ending number, where audience members were urged to join in, “All You Need Is Love.”

Although the entire cast, band and performances are great, cast members who stood out were Mother Russia/Audrey, played by Lachrisa Grandberry; Rosalind, played by Lakeisha Renee, and Jaques/LeBeau, played by Deborah Hay.

Take a look at a quick clip: https://youtu.be/7tauNcf4nO8. And plan to arrive early so you won’t miss the pre-show, which kicks off the entire love fest.

“The Beatles meet the Bard and it’s a terrific party. A pandemic-blasting gust of fresh, joyous air that does the spirit good…” Chicago Tribune

The Theater is located at Navy Pier, and tickets run from $60 to $90. For more information, visit www.chicagoshakes.com/asyoulikeit.