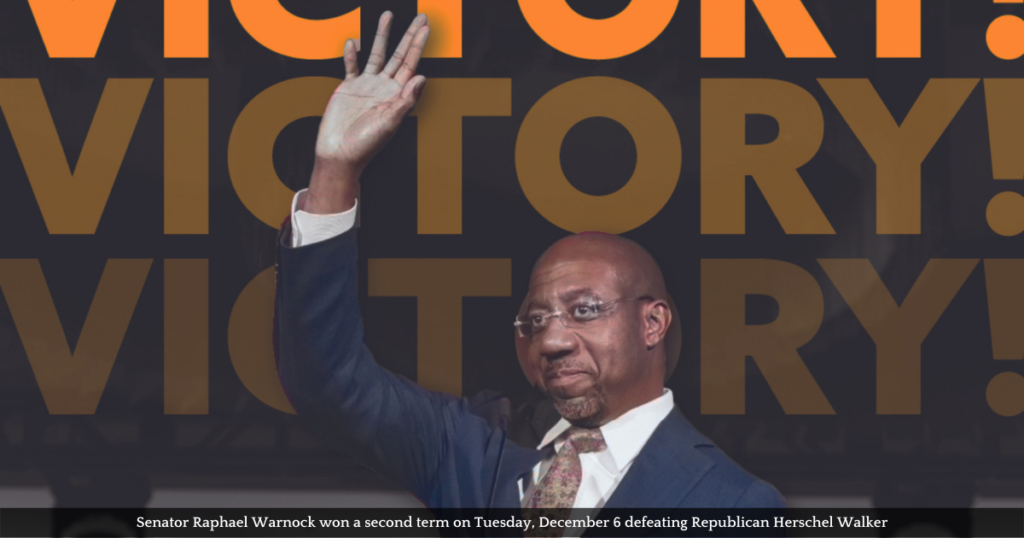 In the 2020 election Warnock defeated Kelly Loeffler by 51 percent of the vote in a race that helped turn Georgia into a swing state.

Warnock’s second win is the result of years of voter registration efforts spearheaded by activist Stacey Abrams who nearly became the state’s first Black governor in 2018; she lost a rematch last month in the midterm election.

With the Democrat’s victory in keeping control of the Senate in the midterms, there were concerns that the Senate race in Georgia would lose its significance and hurt voter turnout. But voters went to the polls anyway.

While Warnock’s win is the enduring legacy of Abrams’ efforts, his win Tuesday gives Democrats a 51-49 edge in the U.S. Senate after a victorious midterm election that pushed back a Republican effort to capture both chambers of Congress.

While Warnock’s win may not have as much impact on the Senate majority, it will give Democrats the edge on Senate committees.

The Senate Judiciary Committee, with its 22 members, will shift from a split of 11 Democrats and 11 Republicans to 12 Democrats and 10 Republicans. That may prevent Republican’s efforts to slow down the confirmation of Biden’s judicial nominees. And with a larger majority, Democrats won’t need Vice President Kamala Harris to cast a vote to break a tie on the vote of a Senate bill.

Warnock’s win over Walker was also a victory over former President Donald Trump, who backed Walker in the race, pitting a Black celebrity candidate against a Black pastor at the historic Ebenezer Baptish church in Atlanta.

With a Black big-name candidate and restrictive voting laws that included a shortened early voting period, Republicans hoped to stave off Georgia’s rising diverse voting population and win the race to gain a seat in the U.S. Senate.

But Black and minority voters turned out in record numbers, higher than in the 2020 presidential election. They voted for Warnock amid concerns that Walker was an unqualified candidate who would be a puppet for white conservative Republicans should he win the Senate race.

Warnock’s was also a victory over Trump, who last month announced his run for a second term as U.S. president in the 2024 election.

Walker was the latest Black celebrity whom Trump and Republicans have courted in recent years to win Black votes. Rapper Ice Cube and artist Kanye West supported Trump in his failed 2020 reelection bid, where he refused to concede the race after falsely claiming election fraud and incited supporters to storm the U.S.

Capitol building on January 6, hoping to stop Congress from certifying the election results.

Concerns about Trump grew last month when West showed up with white supremacist Nick Fuentes at a pre-Thanksgiving dinner at Trump’s Mar-a-Lago estate. Instead of kicking Fuentes off the property, Trump allowed Fuentes to stay and dined with him throughout the evening. As concerns grew among conservative Republicans over several days, Trump denounced West, and claimed he didn’t know who Fuentes was before he showed up on the estate.