SAFE-T Act changes could be forthcoming, ‘technical’ in nature 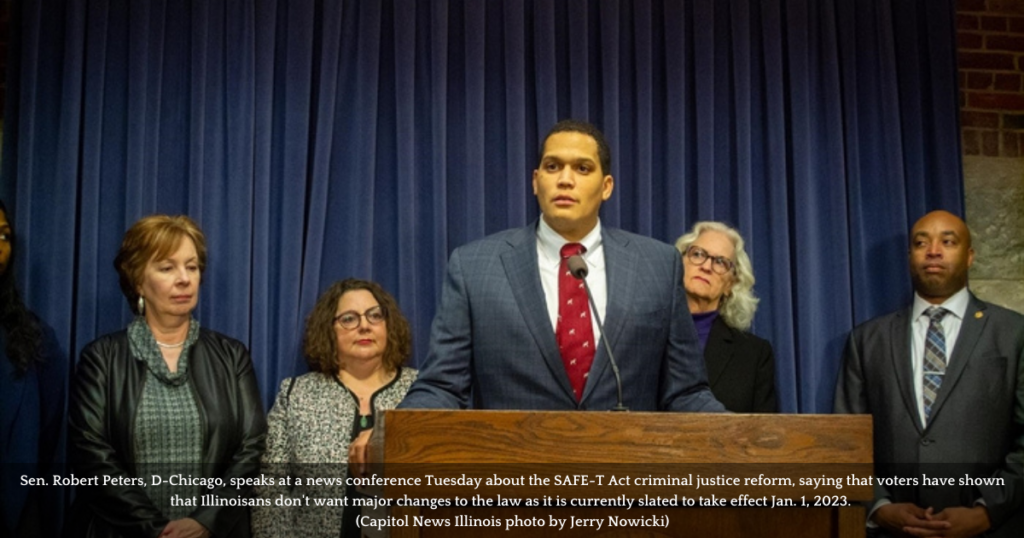 Changes may yet come to the SAFE-T Act criminal justice reform before its Jan. 1 effective date, but some of its major proponents in the General Assembly said the results of the Nov. 8 general election have signified that the ship has sailed drastic amendments to it.

“I will say, when it came to the idea of gutting it, that was a bipartisan thing that was real, and I will acknowledge that,” Sen. Robert Peters, D-Chicago, said at a news conference Tuesday. “But what I will say is that, after Tuesday, the main thing is to make sure it’s technical and we can implement it the right way.”

Long a talking point of Republicans in a contentious election cycle, the SAFE-T Act is a wide-ranging reform that passed in January 2021. One of its final provisions to take effect is a measure that will end cash bail, known as the Pretrial Fairness Act, beginning Jan. 1.

Peters said Wednesday there’s no appetite among advocates to push that date back further.

The PFA eliminates cash as a determinant for pretrial release, replacing it with a system that gives judges authority to detain individuals accused of certain crimes while they await trial.

The law’s standards regarding when a judge can order pretrial detention have been among the most hotly contested provisions in the run-up to the November elections.

As written, the law creates a presumption in favor of pretrial release for lower-level offenders, including most charged with misdemeanors and low-level, non-violent felonies such as possession of small amounts of drugs. Officers would be instructed to release those individuals with a citation and a notice to appear in court within 21 days, but they would still have the authority to arrest the individual and take them into custody if they deem them to be a threat to the public safety.

Advocates say that presumption is necessary to avoid overworking the courts, giving them more time to focus on pretrial detention cases involving dangerous or potentially dangerous individuals. The law also gives the accused individual the right to an attorney beginning with their first appearance in court.

Detainable offenses include non-probationable forcible felonies such as murder, aggravated arson and residential burglary; domestic violence offenses where the abuse victim is a family or household member, or if the defendant was subject to the terms of an order of protection; gun offenses; and several specified sex offenses.

Persons deemed to be “planning or attempting to intentionally evade prosecution” may also be detained pretrial under what is called the “willful flight” standard if they’ve been charged with a crime greater than a Class 4 felony – such as property crimes, aggravated DUI and driving on a revoked license.

An amendment backed by Sen. Scott Bennett, a Democrat from Champaign, would widen judicial authority to detain a defendant charged with any crime if the court believes they are a serious risk of skipping trial, pose a danger to the community, or are likely to threaten a potential witness or juror.

It would also remove language regarding the “presumption in favor of pretrial release.”

Domestic violence victim advocates that helped draft the proposal have argued that those sections of Bennett’s amendment would gut the original law’s intent by keeping the court system clogged with low-level non-violent offenders.

Peters on Wednesday did not directly criticize Bennett’s proposal, contained in Senate Bill 4228, as “gutting” the PFA, but he said he disagreed with it.

What changes will be made, however, is unclear as negotiations continue.

“I mean, the idea is that we will have conversations and negotiate,” Peters said. “I think one of the issues that happened for quite some time is that more people focused on trying to repeal the SAFE-T Act or gut the SAFE-T Act. And they didn’t engage in an authentic and fair manner when it comes to what’s going to happen with this bill. But like I said, we have our door open to have a conversation.”

Repealing the SAFE-T Act is something that new House Minority Leader-elect Tony McCombie said was still the preferred route of her caucus in a news conference Wednesday.

Senate Minority Leader-elect John Curran, meanwhile, said in an interview with Capitol News Illinois that his caucus has generally been “frozen out” of negotiations on the SAFE-T Act’s cash bail provisions.

“So the Democrats decided to go it alone on this issue two years ago,” Curran, of Downers Grove, said of the initial bill’s passage in January 2021. “And they placated the extremes of their base. And what they got was an extreme product that has caused nothing but divisiveness in this state over the last two years on the issues of balancing civil liberties and public safety.”

Curran, in a previous interview with Capitol News Illinois, said he wasn’t opposed to ending cash bail, but he saw several shortcomings in the system that will replace it, including the detention standards and contradictory language in different parts of the bill.

He’d prefer a model adopted in New Jersey – something Peters and others have rejected – that would give judges wider discretion to detain and allow cash bail in certain circumstances.

Thus far, however, Curran said the ongoing discussions in the Senate have included three state’s attorneys and members of two law enforcement groups, but not Senate Republicans.

“There’s no reason we can’t be fair, and at the same time, protect public safety,” Curran said. “That’s where this needs to ultimately land. If they’re not going to get there on their own, and clearly they’re not, they’re at some point going to have to involve us.”

While Peters wouldn’t comment on a combined lawsuit from about 60 state’s attorneys against the SAFE-T Act, Curran said he expected it to eventually come before the Illinois Supreme Court.

“But we as the legislature have an opportunity to actually be responsible on this issue and solve that here, so this litigation becomes unnecessary,” Curran said.

Capitol News Illinois is a nonprofit, nonpartisan news service covering state government. It is distributed to more than 400 newspapers statewide, as well as hundreds of radio and TV stations. It is funded primarily by the Illinois Press Foundation and the Robert R. McCormick Foundation.