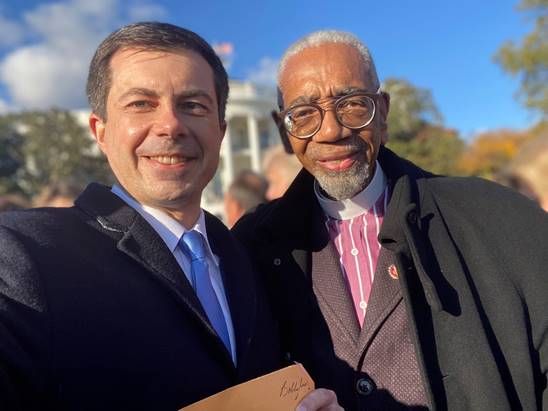 The CTA Red Line is the only rail line that serves the far South Side; however, the line currently ends at 95th Street, while the city continues to 138th Street. “This leaves many without easy access to rapid rail transit and the access to employment and mobility that a major rail line provides,” Rush wrote. “This transit desert disproportionately impacts Black residents, meaning that the early termination of the Red Line has considerable equity implications. This results in many of Chicago’s African American citizens literally being disconnected from the ‘mainland’ of the rest of the city. It reminds one of the ‘colony’ and the ‘motherland’ divides of a past time.”

The Infrastructure Investment and Jobs Act appropriates $8 billion for Capital Investment Grants, which could be used to help fund the Red Line Extension, with an additional $15 billion authorized to be appropriated over the next five years.

“How the Department of Transportation chooses to spend that money will help shape the legacy of the Biden–Harris Administration,” Rush wrote. “Secretary Buttigieg, you have repeatedly expressed a desire to use transportation projects to help dismantle the ugly, lingering specter of racism that too often still dictates where people of color live and have access to employment. Funding the Red Line extension via Capital Investment Grants would be an important step in making transportation work for people of color, rather than working against them.”

Rush also urged Secretary Buttigieg to allocate funding from the Railroad Crossing Elimination Program, newly established in the Infrastructure Investment and Jobs Act, to the 95th Street and Union Pacific railroad grade separation project. The City of Chicago has designated the intersection a “911 Critical Crossing”, meaning it is a chokepoint that limits communities from having access to vital emergency services. The project is listed on the Chicago Metropolitan Agency for Planning (CMAP)’s eTIP database, and the city and state have already budgeted some funds towards engineering for the project.

“Congress recognized the importance of removing grade crossings when it appropriated $3 billion in the Infrastructure Investment and Jobs Act to separate and remove grade crossings,” Rush wrote. “I strongly urge for you to fund the separation of the 95th Street and UP crossing via these newly appropriated funds.”

The full text of Rep. Rush’s letter to Secretary Buttigieg is available HERE.

Photos of Rep. Rush and Secretary Buttigieg are available HERE.