Richard Boykin to run against Preckwinkle for County Board President 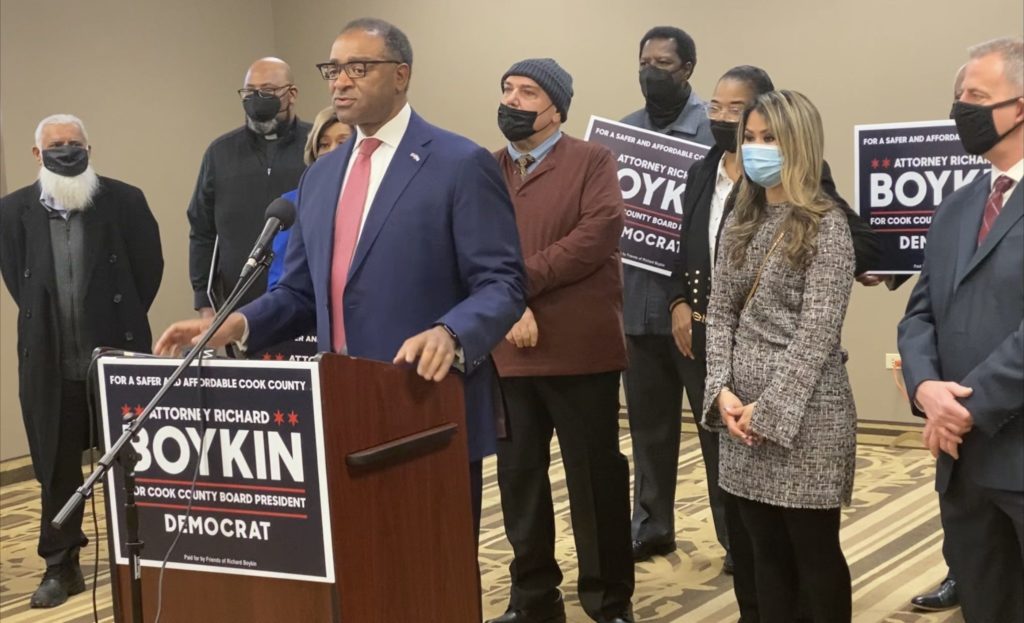 Attorney Richard Boykin, who previously served on the Cook County Board of Commissioners (2014 – 2018), and served on Capitol Hill for 11 years, including time as Chief of Staff to Congressman Danny Davis, officially kicked off his run for President of the Cook County Board with a press conference at the Chicago South Loop Hotel.

Making clear his intention to unseat the current Cook County Board President, Boykin declared, “It’s time for REAL change!” He pointed out the ongoing problems of rising crime and violence in Cook County, and the fact that exorbitantly high taxes – some of the highest in the nation – are making Cook County an unaffordable place to live for many citizens.

Ms. Burnette Boykin, a single mother, raised her children in the Englewood community on the South Side of Chicago. “I am so proud of my son Richard; he has a servant’s heart and is wise beyond his years. As a Cook County Commissioner, he always put people ahead of politics,” said Ms. Boykin.

Boykin’s announcement sets up a showdown with incumbent Cook County Board President Toni Preckwinkle, who last September announced that she will run for a fourth term as the county’s top elected official, putting her response to the COVID-19 pandemic at the center of her bid for reelection. After Boykin opposed Preckwinkle’s Sweetened Beverage Tax, she endorsed his opponent in the 2018 county elections, political rookie Brandon Johnson, who defeated Boykin for his District 1 seat. In 2020, Boykin finished third in a primary election to replace retiring Cook County Circuit Court Clerk Dorothy Brown. A Crusader analysis of the election results showed that Boykin won just over 40 percent of the Black vote.

Richard Boykin graduated from Chicago Vocational High School, where he was an All-City and All-State football player. He worked at Old Chicago Pizza while in high school. The pizzeria’s owner, Paul Metaxas, said, “I gave Attorney Boykin his first job at age 16. He rose to become manager of my business. He is a caring, smart and gentle person who understands the struggles of people. He will truly make Cook County safe and affordable.”

He earned a scholarship to play football at Central State University in Ohio, where he received a BA in Political Science. After college graduation, Boykin worked as a teacher in Chicago Public Schools, then went on to earn a law degree at the University of Dayton School of Law. He became a licensed attorney in Illinois in 1994.

In the intervening years, Boykin would follow his passion for politics and for serving people. He worked on Capitol Hill for 11 years, at different times in the offices of Cong. Danny Davis, Cong. Bobby Rush, and for Hon. Carol Moseley Braun, the first African-American woman U.S. Senator. In 2014, Boykin was elected to the Cook County Board of Commissioners, serving the 1st District for four years.

Boykin accomplished a lot for constituents during his tenure on the Cook County Board of Commissioners. He sponsored legislation to ban assault weapons in Cook County and led efforts to repeal a tax on feminine hygiene products. He is most remembered for being one of the most vocal opponents to President Preckwinkle’s disastrous soda pop tax. Boykin led efforts to successfully repeal the tax.

At his official campaign announcement, Boykin pointed out, “After 12 years in office, President Preckwinkle has not delivered on, nor lived up to, our expectations! Therefore, it is with a sense of profound urgency that I announce my candidacy for President of the Cook County Board.”

Outlining some of his key plans for the office once elected, Boykin said, “My number one priority is to make sure that our neighborhoods throughout Cook County are safe. I will collaborate with the City of Chicago and other municipalities, and the public safety stakeholders to help bring this violence down. I will invest in our most vulnerable communities. I will work to improve our public health system and the physical and mental health of those in need. I will work with businesses to expand economic opportunities in Cook County. I will protect and improve our Forest Preserves.”

Boykin noted that Cook County is at a critical crossroad and, therefore, in need of the change in Cook County government leadership that he can provide.

He promised to “put people before politics,” to listen to the concerns of people, while actively working to improve conditions in Cook County through providing adequate funding for public safety even while ensuring fairer property taxes.

Coach Dorothy Gaters agreed with Boykin, stating, “I have known Richard for more than 20 years. He has always been concerned about young people and the most vulnerable. He is a great leader who will always listen to the people. His focus on public safety and a fairer tax structure will help all residents and businesses. I am proud to serve as the Chair of this peoples’ campaign!”