Rev. Jesse L. Jackson, Sr. surprised Father Michael L. Pfleger Friday when he showed up for the third peace summer march where he praised marchers for their consistent call for an end to the gun flow blamed for the surge in gun violence.

Speaking from his car, Rev. Jackson spoke of the 5,000 blacks who were lynched in America, the need for blacks to stop the current killings, and he mentioned the special election in Georgia that resulted in a victory of two Democrats.

“Marching matters,” he told the crowd. “Your marching” and voting “can change things all around the world.

He also urged people to report the shooters. “Stop the gun flow,” he said. “I am somebody…,” Jackson said as the crowd repeated his famous litany. “Keep hope alive.”

On voting, Rev. Jackson said, “We’ve come to far not to vote. We vote for change.” He gave as an example of the election of Mayor Washington and how the boycott of Mayor Jane Byrne’s Chicagofest sparked a massive voter registration drive that ultimately led to the election of Chicago’s first black mayor.

Rev. Jackson announced he will soon be going on a Southern Voter Registration crusade aimed at increasing the voting rolls. “We must knock on doors and register people.”

Early Friday, Father Pfleger made a clarion call to his supporters to join him at his 7 p.m. Friday peace march hoping this July 4th holiday weekend won’t mirror last’s year’s when 108 people were shot and 17 killed.

“It’s a madness,” Pfleger told his supporters referring to the daily shootings and killings.

Pfleger mentioned the earlier fatal shooting of a 17-year-old girl who was killed by a man riding a bike in the Little Italy Village, the shooting of a Chicago police officer and the mass shooting in the Loop.

He was referring to the Fourth of July holiday shooting and killing that had already begun when around 8:30 a.m. earlier Friday when a Chicago police officer was “ambushed” and shot while responding to a domestic disturbance in the Little Italy neighborhood. A suspect is in custody. Charges have yet to be filed.

“You know this weekend traditionally is a very rough weekend in Chicago, and already we’ve had five people shot last night, two killed, a policeman shot this morning and 3 p.m.,” Father Pfleger told his supporters.

“This afternoon a 17-year-old girl was shot by someone riding their bike…. This is craziness. It’s madness.” Father Pfleger said. He told the crowd when someone asked them why are they bothering to march for peace when the shootings continue, he explained, “It’s presence in the neighborhood.

“Just like we need Jesus’ presence. We need a little Jesus presence wherever we go. We give people hope.”

Pfleger asked supporters to hand out the yellow Faith Community of Saint Sabina resource cards that include the many services Saint Sabina offers including alternatives to a life of crime and a lifeline to education, employment and social services.

But the July 4th holiday weekend shootings in Chicago continued even while they were marching calling for peace to prevail and for shooters to “put the guns down.”

Police Supt. David Brown called the shooting of one of his police officers an “ambush,” and Mayor Lightfoot urged the public to call 311 to get help for domestic issues.

Hours later, Supt Brown announced charges have been filed against Alen Vales, 27, of the 6900 block of South Prairie Ave., for the alleged shooting of a Chicago policeman.

Just as Father Pfleger suspected the beginning of the July 4th holiday began with a series of shootings. Two men, 26 and 29-years-old were fatally shot and three others wounded in the Loop early Friday morning by a man who fired shots at them after an argument ensued.

Three other men were wounded and were taken to Northwestern Hospital where they are listed in good condition, according to the police.

In yet another mass shooting around 9:04 p.m., four people were shot in the West Garfield Park community including a woman, 36 who was shot in the back and taken to the Mount Sinai Hospital, and a 20-year-old woman who was taken to the same hospital. Both are in good condition, according to police.

Two men, one 41-years-old who was shot in his back and another, 25, who was shot many times in the back, were taken to the same hospital in serious condition. No one is in custody. 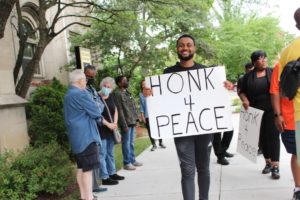 A 26-year-old man was killed around 5:43 p.m. Friday in the 6500 block of South Wolcott. He was fatally shot when a man pulled out a gun and fired several shots. He was pronounced dead at the University of Chicago Medical Center.

Others, like Anthony Lovelace and Glenda Franklin, held huge signs saying, “Honk 4 Peace” as they headed for 79th Street.