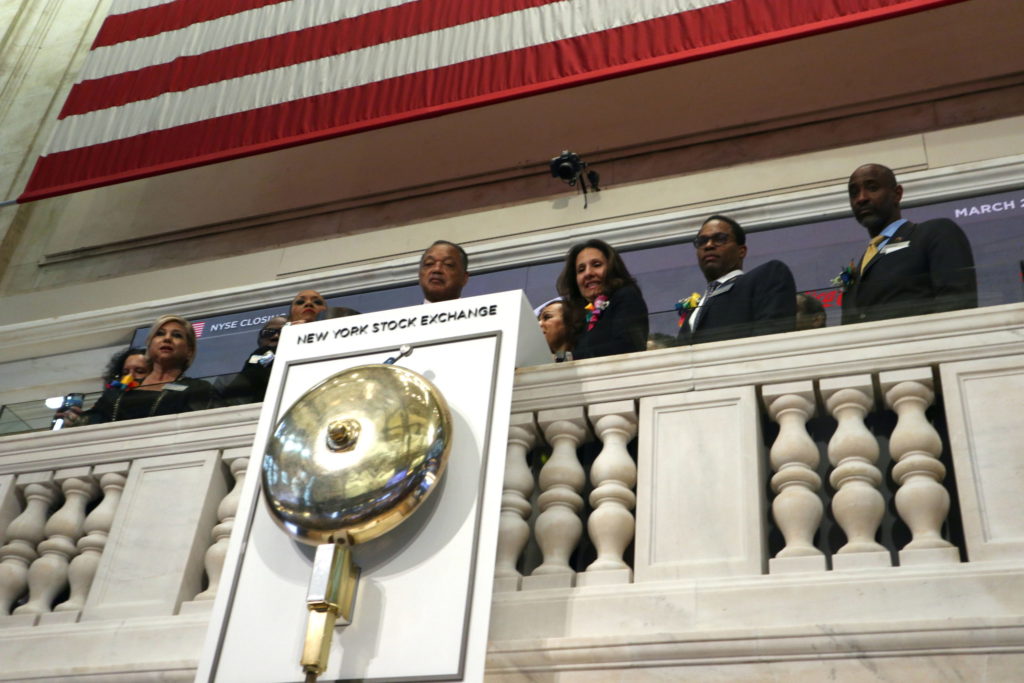 In honor of the Rainbow PUSH Coalition’s Wall Street Project’s 25th anniversary, Reverend Jesse Jackson on Monday, March 21, rang the closing bell at the New York Stock Exchange (NYSE), a tradition that signals the close of trading for that day.

Earlier, Jackson along with sons Jonathan and Yusef, and daughter, Santita, arrived at the NYSE where Jackson was honored by officials, including NYSE Chairman Sharon Bowen, the first Black person to hold that position, for his 25th Wall Street Project anniversary.

Jackson said the Rainbow PUSH Coalition must include everyone. He told the Chicago Crusader, “This Asian hate must end,” and reflected on Dr. King’s last birthday and how he met with a number of people of different races, including Asians, as he planned his Poor People’s Campaign.

Jackson spoke of the era when there was hatred toward the Japanese, who were placed in internment camps during World War II.

These camps were established by Executive Order 9066 signed by President Franklin D. Roosevelt who felt people of Japanese descent, even if they were U.S. citizens, should be incarcerated in these camps. Today, Asian hate is attributed to stemming from white nationalists.

There he was honored for his outreach to Koreans in America and especially his meaning to Pastor Kim who said he grew up listening to Jackson’s “I Am Somebody” speech. He later became a member of that iconic civil rights organization.

Kim preached a sermon about Jesus telling people to repent for things people have not done for peace and justice work and how the media many times “don’t necessarily deal with the truth issues. They have their own way of manipulating people these days.

“We as Christians need to be clear they are not supposed to be manipulated by this power media that creates instead of peace, war, and creates hatred instead of love. There is a power of false media, a spirit we need to cast out.”

Sixty-five-year-old Kim who was born in Korea, said, “I grew up with the teachings of Dr. King and Reverend Jackson. When I was 17 years old arriving in the U.S. without knowing English, I watched Sesame Street because I wanted to learn English,” he told the Chicago Crusader and, there was Reverend Jackson reciting his ‘I Am Somebody’ speech.’”

Kim went on to Boston University where Dr. King attended, and later to the Chicago Theological Seminary where Reverend Jackson graduated. “I was a member of the Rainbow PUSH Coalition in the 1980s. “In those days, he was so tall and he spoke so eloquently.”

“I grew up knowing in my heart that I am somebody. It was so dear to me,” he said referring to Jackson’s “I Am Somebody” speech. Kim played a video of a younger Jackson reciting that speech to several Asian children on Sesame Street.

“To be able to invite Reverend Jackson to my church in this time of Asian hate crimes rising in New York, I am so thankful. I hope he can find a way to work with our Black community to work together to bring peace, justice and harmony and love,” Kim told the Chicago Crusader.

When asked his thoughts on the rise of Asian hate crimes, Kim said, “Whenever white nationalism rises up, they always want to find a scapegoat. They put Asians against poor folks, people who are underserved by this oppressive system. Instead of getting into the major issues of the true problems, this nation has a way of making a way to make them fight against each other putting Asians as a scapegoat.

After Sunday’s worship service, Kim escorted Jackson to the church basement where Jackson held a signing of his new book, “Keeping Hope Alive,” a book containing his sermons and speeches.

When Jonathan Jackson asked his father was the Wall Street Stock Exchange open on Dr. King’s birthday, he said his father talked to the men who agreed to close the stock exchange in the name of Dr. King. “The private sector has the power to make changes” he explained.

He accompanied his father and others to the NYSE where he watched his father ring the closing bell with NYSE chairman, Sharon Bowen.

Reverend Jackson said we still have a long way to go in receiving equity and fairness and that the fight for social justice continues.