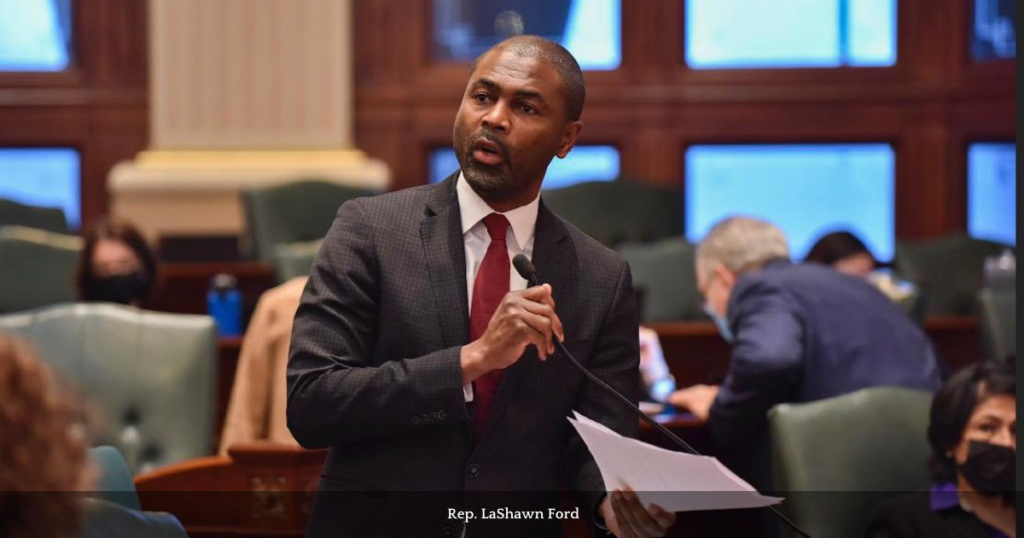 Rep. LaShawn Ford (D-8th) last week pushed for passage of SB 828 that would have given 27,299 Illinois prisoners the right to vote. It failed by three votes during the veto session, but he has until January 10, 2023 to revive it.

Rep. LaShawn Ford’s Senate Bill 828 which would have given Illinois prisoners the right to vote failed during the veto session by just three votes, but he says it is not dead.

“It can be revived,” Ford said referring to SB 828 which he and Senator Mike Simmons (D-7th) introduced. “It is on postponed consideration. We have until January 10th to pass it,” Ford explained. “We need 60 votes to pass the bill”

Ford, a Democratic from the 8th legislative district, explained that the Illinois Constitution states in Article 3, Section 2 that, “A person convicted of a felony, or otherwise under sentence in a correctional institution or jail, shall lose the right to vote which right shall be restored not later than upon completion of his sentence.”

Ford and Simmons are pushing for passage of SB 828 “to end the practice of disenfranchising people throughout the full duration of incarceration in prison.”

They said the bill when passed would “ensure that a person’s right to vote may be reinstated after they have been detained in prison (14 days) and before they have been released.

Ford said SB 828 “is a constitutional change that will restore the right to vote to nearly 30,000 Illinoisans and will continue to make Illinois a national leader in modernizing democratic systems.”

The Illinois Constitution currently states that a person “shall lose the right to vote, which right shall be restored not later than upon completion of his sentence.” The exact length of disenfranchisement is not specified. SB 828 restores the right to vote for voters’ post-conviction.

According to Rep. Ford currently there are 27,299 people in Illinois prisons with 55 percent of those being African American and 23 percent veterans serving 38 life sentences. Women comprise 80 percent of those in prison and 43 percent are under the age of 35.